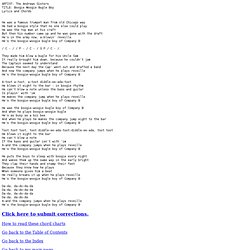 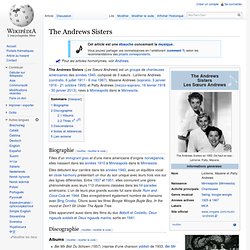 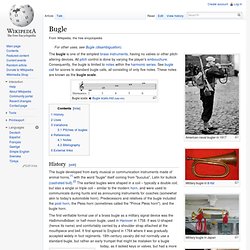 Trumpet. There are several types of trumpet. 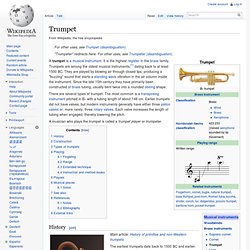 The most common is a transposing instrument pitched in B♭ with a tubing length of about 148 cm. Earlier trumpets did not have valves, but modern instruments generally have either three piston valves or, more rarely, three rotary valves. Piccolo trumpet. Piccolotrumpet in B♭, with separate leadpipes to tune the instrument to B♭ (shorter) or A (longer) The smallest of the trumpet family is the piccolo trumpet, pitched one octave higher than the standard B♭ trumpet. 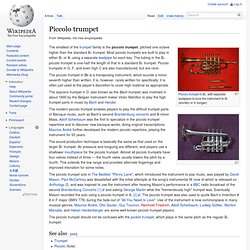 Most piccolo trumpets are built to play in either B♭ or A, using a separate leadpipe for each key. The tubing in the B♭ piccolo trumpet is one-half the length of that in a standard B♭ trumpet. Piccolo trumpets in G, F, and even high C are also manufactured, but are rarer. Bass trumpet. The bass trumpet is a type of low trumpet which was first developed during the 1820s in Germany. 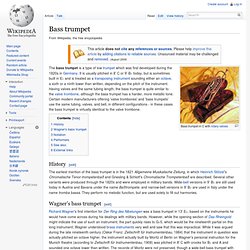 Notation[edit] Slide trumpet. The slide trumpet is a type of trumpet that is fitted with a slide much like a trombone. 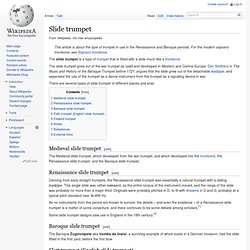 The slide trumpet grew out of the war trumpet as used and developed in Western and Central Europe: Don Smithers in The Music and History of the Baroque Trumpet before 1721, argues that the slide grew out of the detachable leadpipe, and separated the use of the trumpet as a dance instrument from the trumpet as a signaling device in war. There are several types of slide trumpet of different places and eras. Trombone. A person who plays the trombone is called a trombonist or trombone player. 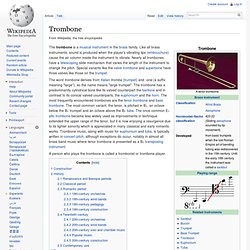 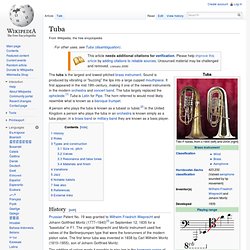 The original Wieprecht and Moritz instrument used five valves of the Berlinerpumpen type that were the forerunners of the modern piston valve. The first tenor tuba was invented in 1838 by Carl Wilhelm Moritz (1810–1855), son of Johann Gottfried Moritz. Adolphe Sax, like Wieprecht, was interested in marketing systems of instruments from soprano to bass, and developed a series of brass instruments known as saxhorns. Euphonium. The euphonium derives its name from the Greek word euphonos,[1] meaning "well-sounding" or "sweet-voiced" (eu means "well" or "good" and phonos means "of sound", so "of good sound"). 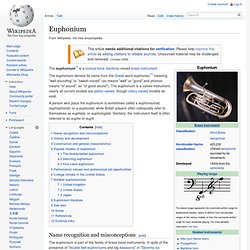 The euphonium is a valved instrument; nearly all current models are piston valved, though rotary valved models do exist. A person who plays the euphonium is sometimes called a euphoniumist, euphophonist, or a euphonist, while British players often colloquially refer to themselves as euphists, or euphologists. Similarly, the instrument itself is often referred to as eupho or euph. Name recognition and misconceptions[edit] To mime a song. Define Mime at Dictionary. Ain't no Mountain High from the "Sister Act 2" Marvin Gaye Ain't No Moutain High Enough lyrics. Pitch (music) In musical notation, the different vertical positions of notes indicate different pitches.

Play top & Play bottom Pitch may be quantified as a frequency, but pitch is not a purely objective physical property; it is a subjective psychoacoustical attribute of sound. Clarinet. The word clarinet may have entered the English language via the French clarinette (the feminine diminutive of Old French clarin or clarion), or from Provençal clarin, "oboe".[1] It "is plainly a diminutive of clarino, the Italian for trumpet", and the Italian clarinetto is the source of the name in many other languages. According to Johann Gottfried Walther, writing in 1732, the reason for the name was that "it sounded from far off not unlike a trumpet".

This may indicate its strident quality in the upper register, although in the low register it was "feeble and buzzing". The English form clarinet is found as early as 1733, and the now-archaic clarionet appears from 1784 until the early years of the 20th century.[2] Characteristics[edit] Sound[edit] Bass clarinet Range[edit] Defining the top end of a clarinet’s range is difficult, since many advanced players can produce notes well above the highest notes commonly found in method books. Acoustics[edit] Schüller's quarter-tone clarinet.

Saxophone. Bore (wind instruments) The bore of a wind instrument is its interior chamber that defines a flow path through which air travels and is set into vibration to produce sounds. The shape of the bore has a strong influence on the instrument's timbre. The diameter of a cylindrical bore remains constant along its length. The acoustic behavior depends on whether the instrument is stopped (closed at one end and open at the other), or open (at both ends). Dzakye M - Music instru... Viola By Choice. Difference of violin and viola Part One. Viola. Music that is written for the viola differs from that of most other instruments, in that it primarily uses the alto clef, which is otherwise rarely used. Viola music employs the treble clef when there are substantial sections of music written in a higher register. Difference of Violin and Viola Part Two. Violas da gamba have a long history. What's a viola da gamba? The viola da gamba (also called the "viol" or "gamba") is not a fretted cello!

It may look like one, but a cello has 4 strings and a viol usually has 6, like a guitar, or 7. In addition, the viol's frets aren't permanently set, like those of a guitar, but are instead made of gut tied onto the neck, like those of a lute, and are therefore movable. Viols are bowed, like cellos, but the bow is held differently-not overhand, as is a violin or cello bow, but underhand, like a pencil or chopsticks. Viols are also tuned differently than are cellos. Cellos (and violins and violas) are tuned in fifths.

The Viola da Gamba and the Cello: Musical Cousins. Viola da Gamba - musicolog.com. The viola da gamba, or viol, is a bowed string instrument with frets. It is held upright and supported between the legs. Viola da gamba literally means leg viol. It can also be played, as a plucked instrument, across the lap. Generally, it is a six-stringed instrument, but seven-stringed basses are very popular and five-stringed instruments are not rare. Tous les matins du monde [4 de 10] Español / Frances. Tous les matins du monde [5 de 10] Español / Frances (01:38)