Why would he care?, a Mortal Instruments + Infernal Devices, Cassandra Clare Crossover fanfic. Ok, I wrote a 17 chapter story a while back, but it was so awful I found that only a few lines and chapters were alright/decent for public viewing. 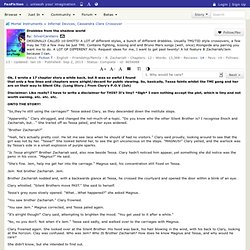 So, basically, Tessa faints whilst the TMI gang and her are on their way to Silent City. (Long Story.) From Clary's P.O.V (Ish) Disclaimer: Like really? I have to write a disclaimer for THIS? "So,they're still using the carriages? " "Apparently. " "Brother Zachariah? " "Yeah, he's actually pretty cool. "Is Tessa alright? " Just to see you smile, a mortal instruments fanfic. Bestfriends, a mortal instruments fanfic. Hello there, just my version of what I think happened between Luke and Jocelyn when she finally told him that she loves him. 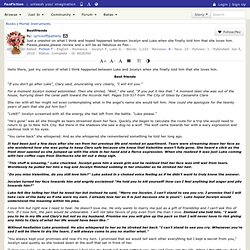 Best friends. Only When I Sleep, a mortal instruments fanfic. Chapter 1 – Moving From Within The night was unnaturally quiet after the battle that had changed the world forever. 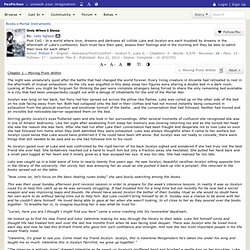 Every living creature in Alicante had retreated to rest in the aftermath of mutual exhaustion. As the city was engulfed in this deep sleep two figures were sharing a double bed in a dark room. Looking at them you might be forgiven for thinking the pair were complete strangers being forced to share the only remaining bed available in a city that had been unexpectedly caught out with a deluge of inhabitants for the end of the Mortal War. Jocelyn was lying on her back, her fiery red hair spread out across the pillow like flames.

Stirring gently Jocelyn's eyes fluttered open and she took in her surroundings. As Jocelyn gazed over at Luke and was confronted by the rigid barrier of his back Jocelyn sighed and wondered if she had truly lost the best friend she ever had. Luke was caught up in a tidal wave of time to nearly twenty five years ago. Forever, a mortal instruments fanfic. I know some other people have written about this but I really wanted to do one myself. 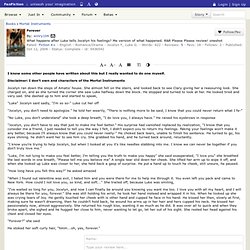 Disclaimer: I don't own and characters of the Mortal Instruments Jocelyn ran down the steps of Amatis' house. She almost fell on the stairs, and looked back to see Clary giving her a reassuring look. She charged on, and as she turned the corner she saw Luke halfway down the block. He stopped and turned to look at her. "Luke" Jocelyn said sadly, "I'm so so-" Luke cut her off "Jocelyn, you don't need to apologize. " he told her wearily, "There is nothing more to be said, I know that you could never return what I fe-" Always, a mortal instruments fanfic. I originally posted this on Tumblr but people wanted to read it on here too so here you go. 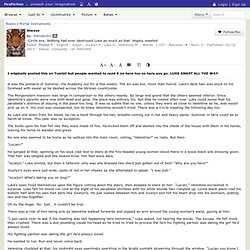 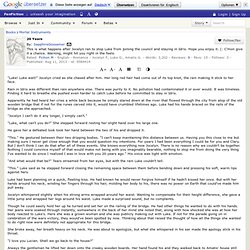 Luke wait! " Jocelyn cried as she chased after him. Her long red hair had come out of its top knot, the rain making it stick to her face. Rain in Idris was different than rain anywhere else. There was purity to it. Apparently he had heard her cries a while back because he simply stared down at the river that flowed through the city from atop of the old wooden bridge that if not for the runes carved into it, would have crumbled lifetimes ago. Hidden Words, a mortal instruments fanfic. I thought of this last night, and I just had to write it. 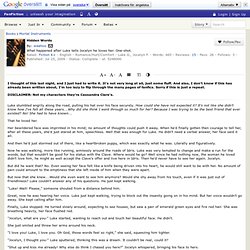 It's not very long at all, just some fluff. And also, I don't know if this has already been written about, I'm too lazy to flip through the many pages of fanfics. I Love You, a mortal instruments fanfic. (Jocelyn & Luke – Mortal Instruments #3) Jocelyn ran down the steps and headed toward the Hall, her heart thudding in her chest. 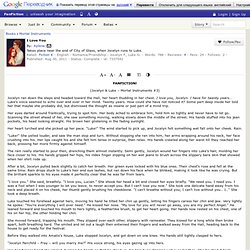 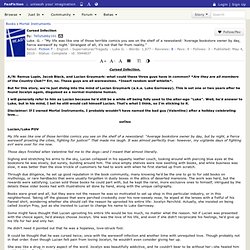 A/N: Remus Lupin, Jacob Black, and Lucian Graymark: what could these three guys have in common? *Are they are all members of the Country Club? I Am Your Father, a mortal instruments fanfic. A/N: I came up with this idea after just having re-read the Mortal Instruments series. 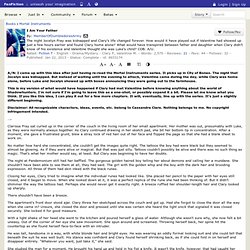 It picks up in City of Bones. The night that Jocelyn was kidnapped. But instead of waiting until the evening to attack, Valentine came during the day, while Clary was home alone, before Luke and Jocelyn showed up with boxes announcing they were going out to the farmhouse. This is my version of what would have happened if Clary had met Valentine before knowing anything about the world of Shadowhunters. Instruments of Chaos, a mortal instruments fanfic. A little fic to lighten up my mood :) I took the conversations from brilliant Tumblr posts that I happened to come across.

I intended to write something short and fluffy and then it grew into a 3k words monster. Idek man, I just have a lot of feelings. Basically all of the official pairings cramped into one and Team Good plus Aline kicking ass in the Clave meeting. Wake Up Jocelyn's Story, a mortal instruments fanfic. Wake Up – Jocelyn's Story No. This couldn't be happening. Not again. She'd done everything she could, taken all the precautions, distanced herself, almost cutting herself off from the world she'd grown up in.

She was content with living like a mundane, a normal human, as long as it had kept Clary safe. And now he was back, the reason she had left in the first place. Toxic Valentine. Title: Toxic ValentineAuthor:meganlovesjbFandom: The Mortal InstrumentsRating: PG-13Character/Pairing: Jocelyn/ValentineWord count: 2,500Disclamer: The Mortal Instruments belongs to Cassandra Clare. No infringements of right intended.Summary:What if the potion Jocelyn took to protect herself and the people she loved from Valentine’s grasps in City of Bones had failed? Toxic Valentine “Sex and white lies,Handcuffs and alibis…my toxic valentine… I'm not the type to forget or to bury my head.Just take off your wings,They could never get you quite as high as I do,And you know it.”

-All Time Low. In the Darkness, a mortal instruments fanfic. A/N: So this is just one of those random pop-into-my-head stories. :) It's a scene between Amatis and Stephen, I chose this pairing because I love their story, even if it is heartbreakingly tragic. :( And I think Stephen loved Amatis more than he loved Celine. Anyway I hope you enjoy the story! :)Disclaimer: All characters go to Cassandra Clare. In the Darkness... Amatis They met in the darkness at the usual spot. Amatis Graymark had expected his letter on the first of the month, because it was always on the first of the month.

As the young woman approached the tree, her blue eyes searched for the familiar golden head of hair. "Amatis? " Amatis shivered at the familiar voice but stood with her back firmly to the source. "Please Amatis, look at me…" Cautiously, Amatis turned around but her eyes were kept firmly on the ground. "H-Hello Stephen," Amatis' tried to smile but faltered.