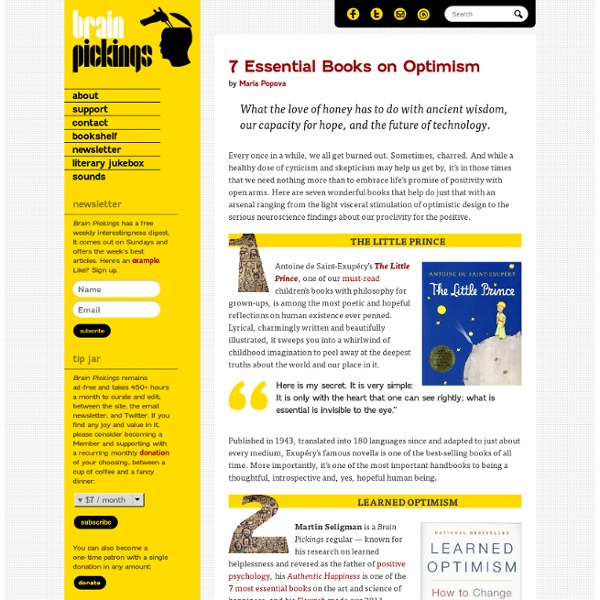 by Maria Popova What the love of honey has to do with ancient wisdom, our capacity for hope, and the future of technology. Every once in a while, we all get burned out. Antoine de Saint-Exupéry’s The Little Prince, one of our must-read children’s books with philosophy for grown-ups, is among the most poetic and hopeful reflections on human existence ever penned. Here is my secret. Published in 1943, translated into 180 languages since and adapted to just about every medium, Exupéry’s famous novella is one of the best-selling books of all time. Martin Seligman is a Brain Pickings regular — known for his research on learned helplessness and revered as the father of positive psychology, his Authentic Happiness is one of the 7 most essential books on the art and science of happiness, and his Flourish made our 2011 Summer Reading List. As you read this book, you will see that there is an epidemic of depression among young adults and among children in the United States today. Full review here.

Big thinkers answer little kids' innocent and profound questions about life, the best biographies, memoirs, and history books of 2013, and more Hey you! If you missed last week's edition – Anne Lamott on writing and how perfectionism kills creativity, the best illustrations from 150 years of Hans Christian Andersen fairy tales, cultivating a suicide-proof culture, and more – you can catch up here. And if you're enjoying this, please consider supporting with a modest donation. Does My Goldfish Know Who I Am? In 2012, I wrote about a lovely book titled Big Questions from Little People & Simple Answers from Great Minds, in which some of today's greatest scientists, writers, and philosophers answer kids' most urgent questions, deceptively simple yet profound. The questions range from what the purpose of science is to why onions make us cry to whether spiders can speak to why we blink when we sneeze. It’s normal to cry when you feel upset and until the age of twelve boys cry just as often as girls. (For a deeper dive into the biological mystery of crying, see the science of sobbing and emotional tearing.)

Brain Pickings How Family Violence Changes the Way Children's Brains Function - Esther Entin - Health In much the same way that combat affects a soldier, violence causes a kid's natural alarm and response system to become too sensitive. Family violence affects the brains of children in much the same way combat affects soldiers, according to a recent study. The research found that chronic stress in children's lives affects their stress response systems -- in particular, two specific areas of the brain, the amygdala and the anterior insula (AI). Our body and brain are designed to recognize and react to threats to our well-being. This is an important capacity to increase our survival in adverse circumstances. The amygdala is the part of the brain that is involved in emotional responses, memory, anticipation of, and preparation for stress. When a person has been exposed to certain kinds of stressful situations, such as ongoing family violence, the amygdala may become overreactive. But it is not just the brains of those exhibiting the symptoms of PTSD that are affected.

21 Most Beautiful Nature Photos On Stumbleupon These are the 21 most beautiful nature photos on Stumbleupon. Stumbleupon is big society where you can spend all your day and all you life with smile on your face. On that site you can find lots of things, like photos, animals, home stuff and many more, nature photos like these one below. These nature photos are really beautiful and very amazing and that is the proof just how much our Earth is beautiful place. The 100 Most Beautiful Words in English ere are the 100 most beautiful words in English. How do we know we have the most beautiful? They were chosen by Robert Beard, who has been making dictionaries, creating word lists, and writing poetry for 40 years. Dr. The words in this book will decorate your articles, essays, blogs, term papers, memos, love letters-even conversations with those we love.

The Quest for the Origin of Altruism: The Tragic Story of George Price by Maria Popova From Darwin to Skinner, or what vampire bats have to do with amoebas and random acts of kindness. Where does true altruism come from? Does it really exist? These are the questions that occupied the brilliant and troubled mind of population geneticist and author George Price, who developed what’s still regarded as the most accurate mathematical, biological and evolutionary model for altruism before taking his own life at the age of 52. In The Price of Altruism: George Price and the Search for the Origins of Kindness, Oren Harman tells the fascinating story of Price’s life and his tireless quest, intersecting it with the seminal work of iconic psychiatrist B. [I]f the search for the natural origins of goodness has woven a historical tapestry of unusual complexity and color, of strikingly original science and dramatic personalities and events, one important thread has so far been missing. For a taste of this extraordinary story, see Harman’s recent RSA talk: Donating = Loving

movies and tv shows you should watch before you die - a list by Chris1660 What Does It Mean to Be Human? by Maria Popova Primates, philosophers, and how subjectivity ensures the absolute truth of our existence. What does it mean to be human? Centuries worth of scientific thought, artistic tradition and spiritual practice have attempted to answer this most fundamental question about our existence. And yet the diversity of views and opinions is so grand it has made that answer remarkably elusive. From The Leakey Foundation, which aims to increase scientific knowledge and public understanding of human origins, evolution, behavior, and survival, comes What Makes Us Human? There is a lot more biology to our behavior than we used to think.” ~ Richard Wrangham Dan Dennett is one of today’s most prominent and prolific philosophers. It’s very hard to change people’s minds about something like consciousness, and I finally figured out the reason for that. Brain Pickings has a free weekly newsletter and people say it’s cool. Share on Tumblr

Musicovery What Is a Person? by Maria Popova What remix culture and philosophy have to do with personhood in the age of synthetic biology. We’ve previously explored three different disciplines’ perspectives on what it means to be human and a neuroscientist’s search for the self. Equal parts critical and constructive, Smith confronts the basic paradox of the social sciences — their preoccupation with describing and analyzing human activities, cultures, and social structures but falling short on the core understanding of the human condition — and tackles the four fundamental flaws of social science in defining personhood. Impoverished is he who can predict economic trends but who does not well understand his own self.” ~ Christian Smith (Economic bonus: Amazon has a deal on the Kindle edition, currently available for $4.95 — a sixth of the analog version.) There is nothing new under the sun. HT my mind on books Brain Pickings has a free weekly newsletter and people say it’s cool. Share on Tumblr

canyon beam of light photo Random photo Submit your photo Stumble Thru landscape photography Tags: canyon light canyon beam of light by brian smith 46 911 views Rating: +8 nasir al-Mulk mosque, iran a stunning view on blyde river canyon, south africa storm approaching grand canyon uvac river canyon, serbia Place your ad here Loading... About OneBigPhoto is your daily dose of high quality photos. 2726 photos uploaded Important stuff Top rated Top galleries Submit photo Privacy policy Wallpaper Contact us Connect with us Search Some rights reserved. ©2013 OneBigPhoto.com Top five regrets of the dying There was no mention of more sex or bungee jumps. A palliative nurse who has counselled the dying in their last days has revealed the most common regrets we have at the end of our lives. And among the top, from men in particular, is 'I wish I hadn't worked so hard'. Bronnie Ware is an Australian nurse who spent several years working in palliative care, caring for patients in the last 12 weeks of their lives. She recorded their dying epiphanies in a blog called Inspiration and Chai, which gathered so much attention that she put her observations into a book called The Top Five Regrets of the Dying. Ware writes of the phenomenal clarity of vision that people gain at the end of their lives, and how we might learn from their wisdom. Here are the top five regrets of the dying, as witnessed by Ware: 1. "This was the most common regret of all. 2. "This came from every male patient that I nursed. 3. "Many people suppressed their feelings in order to keep peace with others. 4. 5.

25 Indie Gems You Can Watch On Netflix Right Now The recent downfall of the video store and the rise of Netflix and online streaming have left a crucial element to the browsing experience in the dust. No longer can you talk to the knowledgeable and somewhat film nerdy guy behind the counter about what’s good or what’s not. The “five star” Netflix rating system gives a decent overview but sometimes you want some nitty gritty critiques and recommendations for YOU. This is the list for you. In the early 90’s the “Indie” film scene boomed to national recognition. 1. This quite delicious little small town noir story on drugs, stars Vince Vaughn and Joaquin Phoenix in a serial killer cat and mouse game. This was also before Phoenix made his big push to the mainstream as the next legendary actor of our time, but you can see his search for the unique in ordinary people in his complex performance. 2. Directed by the late and underappreciated, Ted Demme. 3. 4. 5. This may be one of the luckiest breaks in independent cinema. Pages: 1 2 3 4 5