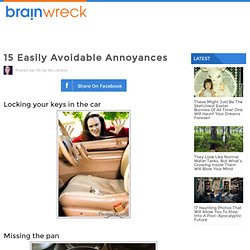 This is Rock'n'Roll!!! 21 Reasons To Never Have Kids. Funny Pictures, Funny Quotes – Photos, Quotes, Images, Pics. Funny Pictures, Humor, Funny Videos, Internet Comedy. How To: Make Pancakes Like a Crack Head. The 7 Most Badass Acts of Vandalism Ever Photographed. NOTE: Everything in this article is against the law. 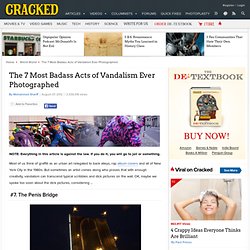 If you do it, you will go to jail or something. Most of us think of graffiti as an urban art relegated to back alleys, rap album covers and all of New York City in the 1980s. But sometimes an artist comes along who proves that with enough creativity, vandalism can transcend typical scribbles and dick pictures on the wall. OK, maybe we spoke too soon about the dick pictures, considering ... #7. Via Doobybrain.com. Cat Saves Child From Mom. Funny or Die - Videos. Jim Huggins: Some Humorous Stories. Are Women Born This Way. PIXELS OLD SCHOOL - AMAZING RENDER. The best activist videos from the web and our original spoof ads. Adventure Games - Free Games Online, Free Online Games, Flash Games! Huge 30 min Best Epic Fails Compilation May 2012 - FailingEveryDay.com. 6 Oddly Specific (And Extensive) Online Collections of WTF. 8 Children's Movies Studios Don't Have the Balls to Make.

For my day job, I work for a major feature animation studio, and one of their coolest and most dangerous policies is that any employee can submit a pitch for a movie idea. 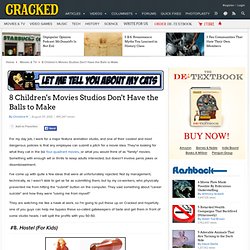 They're looking for what they call in the biz four-quadrant movies, or what you would think of as "family" movies: Something with enough wit or thrills to keep adults interested, but doesn't involve penis jokes or disembowelment. I've come up with quite a few ideas that were all unfortunately rejected. 4 Child Vloggers Who Make Us Fear For Their Future. 3 Ways to Tell If Your Friend Is a Fake Person.

How to Deal With Annoying Interruptions. Stuff That Must Have Happened: Little Mermaid Cover Approval. The 8 Most Unintentionally Hilarious Amateur Music Videos. Funny. Random Articles Popular Articles Wall to WatchShowcasing human creativity since 2011. 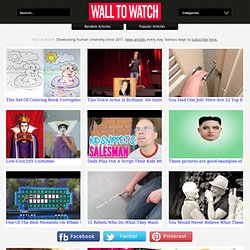 New articles every day. Various ways to subscribe here. Quickfix Archive. Over the past few weeks, several major fast food chains have introduced new and visually disgusting additions to their morning menus, prompting what experts are calling the "breakfast wars. 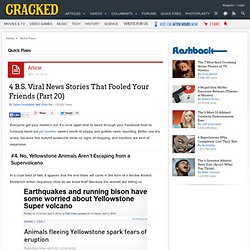 " Why? Because apparently there is $10 billion to be made off of Americans who can't crack their own eggs in the morning. Clearly, we had to see what the fuss was about, so we sent one lucky researcher to find out which is the least of three evils: the stalwart (McDonald's Egg White Delight McMuffin), the faux elite (Starbucks Bacon and Gouda Sandwich), or the crazy-eyed, shit-stained new kid (Taco Bell Sausage Waffle Taco)? 9 Child Prodigies Who Are Clearly Dangerous Mutants. Sex as Understood by Adolescent Boys. 10 Torturous Methods of Execution. Browse Categories. Funny or Die - Funny Videos, Funny Pictures, and Funny Jokes. Brain-Dead Teen, Only Capable Of Rolling Eyes And Texting, To Be Euthanized. Crazy Japanese Foot Acrobats from 1904 from That Happened! Superman Returns (2006): Superman Gets Beaten Up. Subliminal Messages. Your source of daily updated funny pictures and gifs.

Legos News, Videos, Reviews and Gossip - io9. Mug Shots 4/8/11. 5 Videos That Tried to be Cute (And Failed Hilariously) The Top 10 Celebrity Sex Videos Nobody Wanted to See. John Cheese returns to the Cracked guest column, and this time he's taking more bullets for us than a bad guy within reach of Bruce Willis during a machine gun battle. 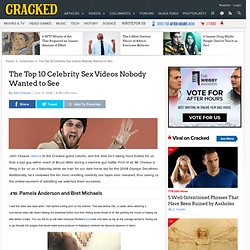 First of all, Mr. Cheese is filling in for us on a Saturday while we train for our dark horse bid for the 2008 Olympic Decathlon. Additionally, he's reviewed the ten most revolting celebrity sex tapes ever released, thus saving us the embarrassment of admitting we watched them ourselves. Pamela Anderson and Bret Michaels I saw this video way back when I first started surfing porn on the internet. The Upside: Save Money on Toiletries – Save Water in Bathrooms. Pancake Art: Dad Creates Intricate 'Star Wars' Pancakes And More For Kids (PHOTOS) By the looks of it, illustrator Nathan Shields is more creative before noon than the rest of us are all day. 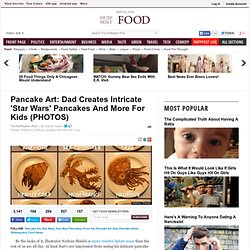 At least that's our impression from seeing his intricate pancake art, which he posts on his blog, Saipancakes. Shields is also a stay-at-home dad living in Saipan, the largest of the many small landmasses that make up the U.S. Commonwealth of the Northern Mariana Islands. Inspired by his own mother, who'd create "monster pancakes" for him as a boy, Shields decided to try and impress his own young children.

A former math teacher, many of Shields' designs seem to have some geeky inspiration behind them -- get a load of the "Star Wars" designs or the fractals, a mathematical concept that when repeated results in a complex pattern. Three Year Epic Prank On One Stranger « Urban Prankster.