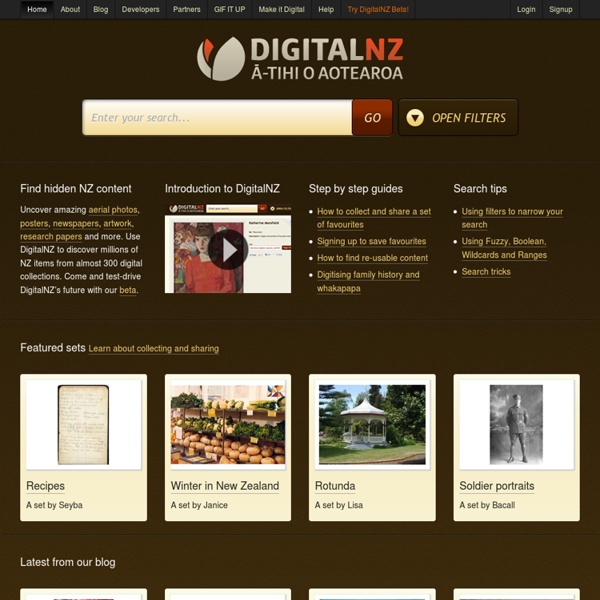 National Library resources: Gallipoli Campaign Image: Anzac Cove, Gallipoli by State Library of South Australia on Flickr This year, 2015, is the 100 year anniversary since the landing of ANZAC troops on the beaches of Gallipoli, Turkey. Discover the history and what happened with the landing of the New Zealand and Australian troops. These resources have been selected to support this popular topic – Gallipoli SCIS 1674365 Digital NZThis site provides access to thousands of pictures, video, sounds and objects from New Zealand museums, libraries, galleries, archives and private institutions. Suggested level: primary, intermediate, All About Turkey Covers the history of Gallipoli and the campaign, World War I from the Turkish perspective, including naval battles, and land battles. Suggested level: intermediate, secondarywww.allaboutturkey.com/gelibolu.htm BBC History World War 1 The battle for Gallipoli February 1915 - January 1916. Eyewitness to History: Battle at Gallipoli 1915 The Gallipoli Campaign Books

World Digital Library Home Library 101 Library 101: Introduction David: *singing* “Library 101!”Michael: *screaming off key* “The basics have changed!!”David: “Cut”Michael: “Sorry..I got a little excited there.”David: “No worries, my man, this is pretty exciting stuff. We’ve got the song, the video…”Michael: “The essays from a ton of cool, smart library folks…”David: “The web site, the buttons, the shirts…”Michael: “The Library 101 Project presentation, oh, and the debut of the Project, which is most of this all wrapped into one!” Library 101: Section I – History (Back to top)What happened that made NOW such a critical, rare time for libraries? Libraries have always done important work and returned value to the communities they serve. As technology changed, we did adapt – for example, we learned some basic business skills, like how to type (7), how to handle ourselves during a conference call (8), and how to create an interesting presentation (9). Library 101: Section II – Present OK – I said we’d need to talk 2.0 tools.

NZ History Online - The Gallipoli campaign Each year on Anzac Day, New Zealanders (and Australians) mark the anniversary of the Gallipoli landings of 25 April 1915. On that day, thousands of young men, far from their homes, stormed the beaches on the Gallipoli Peninsula in what is now Turkey. For eight long months, New Zealand troops, alongside those from Australia, Great Britain and Ireland, France, India, and Newfoundland battled harsh conditions and Ottoman forces desperately fighting to protect their homeland. By the time the campaign ended, more than 130,000 men had died: at least 87,000 Ottoman soldiers and 44,000 Allied soldiers, including more than 8700 Australians. Among the dead were 2779 New Zealanders, about a fifth of all those who had landed on the peninsula. In the wider story of the First World War, the Gallipoli campaign made no large mark.

Wikisource, the free library Documentary Heaven | Watch Free Documentaries Online DigiStore - - Te Pātaka Matihiko Digistore is a storehouse of digital content to support learning across the curriculum, from early childhood through to senior secondary. Accessing Digistore Digistore resources are only available for New Zealand educators due to copyright restrictions. Because of this, you need to join and login to Digistore to access the collection. Please read the registration terms and conditions relating to the use of the resources. Digistore is now accessed with your Education Sector Logon, as part of TKI's 'single sign on' system. Need help? Please contact digistore@tki.org.nz or contact our TKI channel support team, telephone 0800 858 525. What's new? New Advanced search The Digistore Advanced search has been refined so you can now search for resources by level and search for resources written in Te Reo Mãori. Using digital content Visit the Digistore Wiki for examples and guidance on how digital content can support learning through The New Zealand Curriculum and Te Marautanga o Aotearoa.

NZ on Screen - Gallipoli search results The World War I Collection Curated by NZ On Screen Team 2014 marks the centennial of the start of World War I. Over 100,000 New Zealanders served overseas in the 'Great War'. Browse collection › Children of Gallipoli Television, 2001 (Full Length) Children of Gallipoli gave NZ viewers, for the first time, a Turkish view of the Gallipoli story. Watch now › Gallipoli: The Frontline Experience Television, 2005 (Trailer) Made by Turkish director Tolga Örnek, this acclaimed film’s subject is the 1915 Gallipoli campaign in World War I. Watch now › Gallipoli: The New Zealand Story Television, 1984 (Full Length) This documentary tells the stories of the New Zealand soldiers who were part of the identity-defining Gallipoli campaign in World War I. Watch now › Anzac Day Collection This collection brings together 50+ titles covering Kiwis at war. Browse collection › Legendary NZ TV Moments

. | The Public's Library and Digital Archive Gaming in Libraries – The Course » Join Scott Nicholson to learn about Gaming in Libraries We’ve made it to the end! Here are some ways you can keep up with gaming in libraries. Also, I’ve got a survey about the class that I’d like you to take. It won’t take long, and the feedback is important to help me justify this course! Also, it will help me know what types of things to cover in future videos. Please take this right away before you forget what was in the course! Also, if you have enjoyed this experience, please post a brief review about the class on your favorite discussion board or mailing list! You can download it from the Internet Archive at URLs from the video: Games and Gaming MIG: LibGaming Google Group: Board Game Podcasts: RPG Podcasts: Gaming in Libraries Podcast: