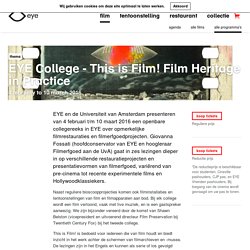 This introductory lecture deals with a number of issues central to the question: “What is film heritage?” Giovanna Fossati (Chief Curator at EYE and Professor of Film Heritage at the UvA) addresses the different approaches, trends and challenges of preserving and presenting film heritage, both at EYE and internationally. Fossati draws on a number of examples including the Short Film Pool distribution system, an EYE initiative that provides subscribed film theatres with unlimited access to more than 300 digital short films. This lecture concludes with the screening of the complex restoration (carried out in 2005 by EYE) of the long-lost film Beyond the Rocks, a classic silent film starring Rudolph Valentino and Gloria Swanson.

Films: Beyond the Rocks (Sam Wood, 1922) and Short Film Pool compilationLive music. Liquidator. The project Liquidator started with a research question; where lies the ultimate border of film preservation, and how does it look? 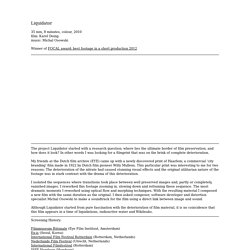 In other words I was looking for a filmprint that was on the brink of complete deterioration. My friends at the Dutch film archive (EYE) came up with a newly discovered print of Haarlem; a commercial 'city branding' film made in 1922 by Dutch film pioneer Willy Mullens. This particular print was interesting to me for two reasons: The deterioration of the nitrate had caused stunning visual effects and the original utilitarian nature of the footage was in stark contrast with the drama of this deterioration.

I isolated the sequences where transitions took place between well preserved images and, partly or completely, vanished images. LIquidator fragment. Sound & Sarcasm - Sound Design on "Short Film" The History and Science of Color Film: From Isaac Newton to the Coen Brothers. Today we’ll look at the science and history that allows us to enjoy color in film. 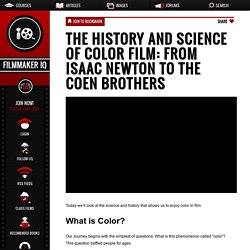 What is Color? Our Journey begins with the simplest of questions. What is this phenomenon called “color”? This question baffled people for ages. The Changing Shape of Cinema: The History of Aspect Ratio. Aspect Ratio is a fundamentally simple concept with a deep and important history. 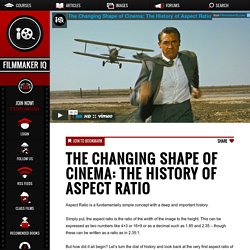 Simply put, the aspect ratio is the ratio of the width of the image to the height. This can be expressed as two numbers like 4×3 or 16×9 or as a decimal such as 1.85 and 2.35 – though these can be written as a ratio as in 2.35:1. The Dream of Color Music, And Machines That Made it Possible. Animation World Magazine, Issue 2.1, April 1997 by William Moritz Elfriede Fischinger, Barbara Fischinger and Bill Moritz at a 1996 Lumograph performance at the Goethe Institute in Los Angeles. 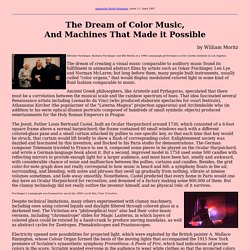 The dream of creating a visual music comparable to auditory music found its fulfillment in animated abstract films by artists such as Oskar Fischinger, Len Lye and Norman McLaren; but long before them, many people built instruments, usually called "color organs," that would display modulated colored light in some kind of fluid fashion comparable to music. Ancient Greek philosophers, like Aristotle and Pythagoras, speculated that there must be a correlation between the musical scale and the rainbow spectrum of hues. Guy Sherwin 'Man With Mirror' Guy Sherwin film/videography. Analog Sound - How Movie Sound Works. The mechanism for delivering sound in the early days of cinema was incredibly simple. 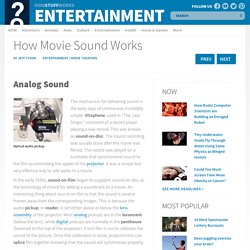 Vitaphone, used in "The Jazz Singer," consisted of a record player playing a wax record. This was known as sound-on-disc. The sound recording was usually done after the movie was filmed. The record was played on a turntable that synchronized sound to the film by controlling the speed of the projector. It was a simple but very effective way to add audio to a movie. 2011 Screenings. Direct/Handmade Sound programme co-curated by the Centre for Visual Music and Bath Spa University Centre for Musical Research. 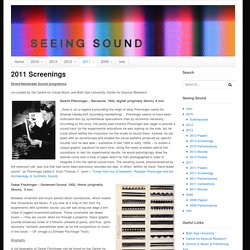 Rudolf Pfenninger – Barcarole. 1932, digital (originally 35mm), 8 min ..there is an ur-legend surrounding the origin of what Pfenninger called his tönende Handschrift (Sounding Handwriting)… Pfenninger seems to have been motivated less by synesthesial speculations than by economic necessity. According to the story, the poorly paid inventor Pfenninger was eager to provide a sound track for the experimental animations he was making on the side, but he could afford neither the musicians nor the studio to record them. Instead, he sat down with an oscilloscope and studied the visual patterns produced by specific sounds until he was able – sometime in late 1929 or early 1930s – to isolate a unique graphic signature for each tone. Oskar Fischinger – Ornament Sound. 1932, 16mm (originally 35mm), 5 min Biography Barry Spinello – Soundtrack. 1969, 16mm, 10 min. 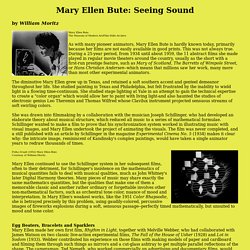 This was not always true. During a 25-year period, from 1934 until about 1959, the 11 abstract films she made played in regular movie theaters around the country, usually as the short with a first-run prestige feature, such as Mary of Scotland, The Barretts of Wimpole Street, or Hans Christian Andersen--which means that millions saw her work, many more than most other experimental animators.The diminutive Mary Ellen grew up in Texas, and retained a soft southern accent and genteel demeanor throughout her life.

She studied painting in Texas and Philadelphia, but felt frustrated by the inability to wield light in a flowing time-continuum. 2003BodyScreenShadow. Fantasia of Color in Early Cinema. Les Tulipes By Giovanna Fossati, Tom Gunning and Joshua Yumibe, and Jonathon Rosen Foreword by Martin Scorsese. 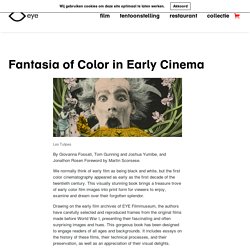 We normally think of early film as being black and white, but the first color cinematography appeared as early as the first decade of the twentieth century. This visually stunning book brings a treasure trove of early color film images into print form for viewers to enjoy, examine and dream over their forgotten splendor. Drawing on the early film archives of EYE Filmmuseum, the authors have carefully selected and reproduced frames from the original films made before World War I, presenting their fascinating and often surprising images and hues. This gorgeous book has been designed to engage readers of all ages and backgrounds. “I could gaze at the images in this book for hours. "The most gorgeous collection of photos I've ever seen. Film colorization. This article is about colorization of monochrome moving-picture images. 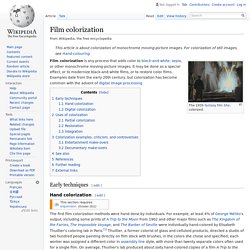 For colorization of still images, see Hand-colouring. Film colorization is any process that adds color to black-and-white, sepia, or other monochrome moving-picture images. It may be done as a special effect, or to modernize black-and-white films, or to restore color films. Examples date from the early 20th century, but colorization has become common with the advent of digital image processing. Early techniques[edit] Georges Méliès. Early life and education[edit] Plaque commemorating the site of Méliès' birth – "In this block of flats was born on the 8th of December 1861 Georges Méliès, creator of the cinematic spectacle, prestidigitator, inventor of numerous illusions" Marie-Georges-Jean Méliès was born 8 December 1861 in Paris, son of Jean-Louis-Stanislas Méliès and his Dutch wife, Johannah-Catherine Schuering.

Knaap - Space-Modulation Bart Vegter 1994 1:00 silent - De Tijd Bart Vegter 2008 9:00 silent - Interlude Joost van Veen 2005 2:30 'Abstract film is a genre that has existed almost as long as the medium film itself. To stress its importance, one is sometimes inclined to refer to a coherent tradition, but in abstract film involves a collection of Einzelgänger through the last century.' This absence of the herding instinct can be partly explained by the very different backgrounds of its practitioners. Space-Modulation. Home - Celluloid Remix. Museu del Cinema.