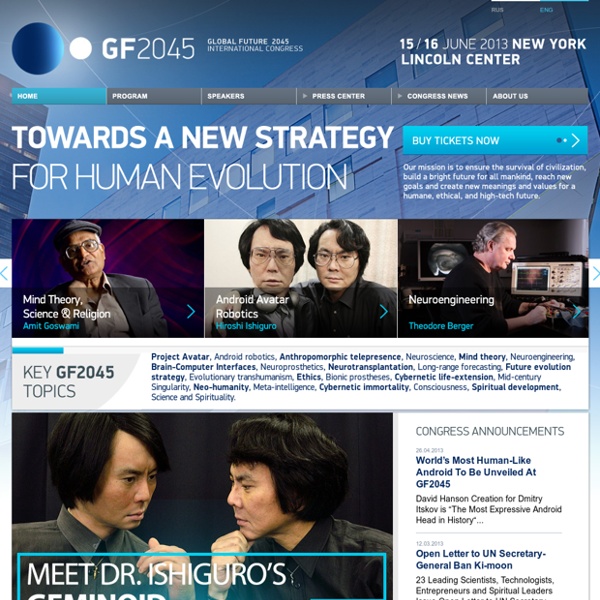 The World Future Council: WFC - Home Ray Kurzweil about GF2045 and 'Avatar' Founded by Russian entrepreneur Dmitry Itskov in February 2011 with the participation of leading Russian specialists in the field of neural interfaces, robotics, artificial organs and systems. The main goals of the 2045 Initiative: the creation and realization of a new strategy for the development of humanity which meets global civilization challenges; the creation of optimale conditions promoting the spiritual enlightenment of humanity; and the realization of a new futuristic reality based on 5 principles: high spirituality, high culture, high ethics, high science and high technologies. The main science mega-project of the 2045 Initiative aims to create technologies enabling the transfer of a individual’s personality to a more advanced non-biological carrier, and extending life, including to the point of immortality. A large-scale transformation of humanity, comparable to some of the major spiritual and sci-tech revolutions in history, will require a new strategy.

Roboethics(Robot Ethics) Info Database | Roboethics(Robot Ethics) Info Database: A Place to Talk about the Newest Technologies and the Ethical Issues Behind Them Commentary » Google It’s exciting for the robotics community that the giants (Google, Apple, and Amazon) are actively investing in robotics. Indeed, my initial response to hearing about Google’s first seven of a series of acquisitions of robotics-related companies was a very positive one (these companies include Shaft, Industrial Perception, Meka Robotics, Redwood Robotics, Bot & Dolly, Autofuss, and Holomni, see Frank Tobe’s article for more details on these companies). Even if Google’s actual direction is to put bipedal robots in self-driving cars so that people can enjoy fast, fully-autonomous door-to-door delivery of flowers on Valentine’s Day, my view was that such investments can only be good for the robotics community. Then I began to feel a little bit uneasy when Google acquired Boston Dynamics. What does this all mean? However, I do applaud the fact that Google is setting up an ethics board to presumably oversee what they will and will not do with their technologies.

Welcome to WFSF The International Flag of Planet Earth The scientific study of flags is called vexillology, and the practice of designing flags is called vexillography. Both of these are an outcome of heraldry. In these practices there are different unofficial design rules/costums, about colors, placement, proportions, typography, and aestethics in general. This proposal is accurate according to the regulations regarding flags. Centered in the flag, seven rings form a flower – a symbol of the life on Earth. Centered on an azure field, seven circles of silver interlaced, creating a flower.

Robot Radar | DaVinci Institute The Amazing Rise of the Mandela Effect! 13th August 2016 By Cynthia Sue Larson Guest writer for Wake Up World The Mandela Effect: When History Just Won’t Stay Put The phrase “Mandela Effect” has been trending upward at an exponential rate since July 2015, according to Google Trends. While many are surprised by the recent surge of interest in the “Mandela Effect,” those of us who have been researching and writing about this phenomenon of reality shifts and alternate histories have long been anticipating just such a rise of interest. What is the Mandela Effect? The “Mandela Effect” is named after South African anti-apartheid revolutionary Nelson Mandela, who became a topic of interest in the year 2010 by people noticing with surprise that he was alive at that time – since many people remembered him having died while incarcerated. The Mandela Effect is one of those things most people won’t believe in until it happens to them. I’ve been researching this phenomena since the 1990s. Finding Evidence of Many Worlds in Alternate Histories

Recent News A new web site, co-founded by Illah Nourbakhsh, professor of robotics at Carnegie Mellon University, will share the insights of leading thinkers and experts in robotics regarding the popular news media’s coverage of robotics. Through thoughtful articles and commentaries, RobotRadar.org explores the wider impacts of robots and robotics on society. Each report is written by a robotics expert in response to an article published in the popular media. Constrained by space and deadlines, popular reporting of robotics often merely scratches at the surface and fails to accurately reflect the underlying science, or fully explore the social and ethical ramifications of research developments, the site’s founders say. “We wanted to create a mechanism that would allow roboticists to comment critically on news reports,” Nourbakhsh said, “allowing them to add in the caveats and more subtle analyses that will lead to more informed debate about the role and place of robots in society.”

Club of Amsterdam - Shaping Your Future in the Knowledge Society