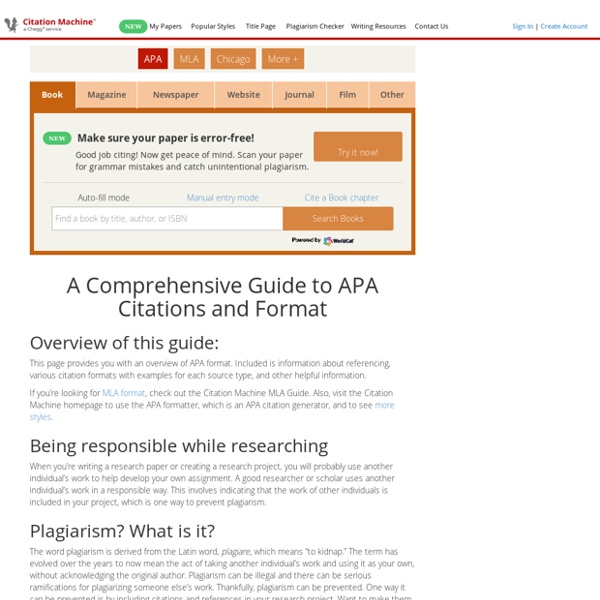 Overview of this guide: This page provides you with an overview of APA format. Included is information about referencing, various citation formats with examples for each source type, and other helpful information. If you’re looking for MLA format, check out the Citation Machine MLA Guide. Also, visit the Citation Machine homepage to use the APA formatter, which is an APA citation generator, and to see more styles. Being responsible while researching When you’re writing a research paper or creating a research project, you will probably use another individual’s work to help develop your own assignment. Plagiarism? The word plagiarism is derived from the Latin word, plagiare, which means “to kidnap.” All about citations & references Citations and references should be included anytime you use another individual’s work in your own assignment. APA style citations are added in the body of a research paper or project and references are added to the last page. Here’s an acceptable option: and Example:

Cite This For Me Welcome to Cite This for Me About Cite This For Me Cite This For Me is one of the most popular citation tools today. Launched in October 2010, we began with the mission of helping students create perfect citations in a fraction of the time. Since then, Cite This For Me has assisted millions of users across the world including in the United Kingdom, United States, Australia, and beyond. Identifying Primary and Secondary Resources Sources of information are often categorized as primary or secondary depending upon their originality. Click here to view the tutorial. Primary Sources A primary source provides direct or firsthand evidence about an event, object, person, or work of art. Primary sources provide the original materials on which other research is based and enable students and other researchers to get as close as possible to what actually happened during a particular event or time period. Published materials can be viewed as primary resources if they come from the time period that is being discussed, and were written or produced by someone with firsthand experience of the event.

Remove Line Breaks Online Tool You can remove line breaks from blocks of text but preserve paragraph breaks with this tool. If you've ever received text that was formatted in a skinny column with line breaks at the end of each line, like text from an email or copy and pasted text from a PDF column with spacing, word wrap, or line break problems then this tool is pretty darn handy. You also have the option of just removing all line breaks without preserving paragraph breaks (usually double line breaks). Use this tool because spending hours manually removing line breaks sucks if you're pasting content from something like a PDF with a weird text format where the word wrap and abrupt line break is causing problems then this tool will help you.

The history of legal challenges to the Pledge of Allegiance The Pledge of Allegiance to the United States' flag has been part of American life for generations, but not without some constitutional controversy. The pledge has existed in some form since September 1892 when it appeared in a magazine article that commemorated the 400th anniversary of Christopher Columbus’s arrival in the New World. Francis Bellamy, an ordained minister, created a pledge that would be taken on Columbus Day by millions of school children. His version did not mention the words “under God”: Contents A list of what is available on this blog. For songs and posts related to songs, see the Songs page For exercise generators etc., see the Teacher tools page For posts related -ize / -ise verbs, see the -ize / -ise page For explanations and exercises for learners, see next section. For posts about usage, controversies, history, and language in general, see the General sections For students of English Common errors learners make Collocations and finding language in context

APA in Microsoft Word Add a citation after a quote On the References tab , in the Citations & Bibliography group, click the arrow next to Style. Click the style that you want to use for the citation and source. Click at the end of the sentence or phrase that you want to cite. Click Insert Citation and then select Add New Source. The Pledge of Allegiance The Pledge of Allegiance was written in August 1892 by the socialist minister Francis Bellamy (1855-1931). It was originally published in The Youth's Companion on September 8, 1892. Bellamy had hoped that the pledge would be used by citizens in any country. How To Cite Social Media Using MLA and APA YouTube has progressed beyond cat videos. Twitter is more than just sharing what you’re eating for dinner. All of the major social networks are keystones of our online life and make up a big portion of who we are. So it’s no surprise that there are now guidelines on how to cite social media using the MLA and APA standards. In fact, I’m surprised it’s taken this long to see this topic hit the mainstream.

AUT Uni APA Style Academic integrity Academic integrity involves the acknowledgement of your own and other peoples’ written work, images, audio files, or their ideas. The only content which you do not need acknowledge is common knowledge. West Virginia v. Barnette: The freedom to not pledge allegiance Children and young people are often the ones brave enough to challenge the constitutional status quo. In Supreme Court cases like Tinker v. Des Moines Independent School District and Hazelwood School District v.