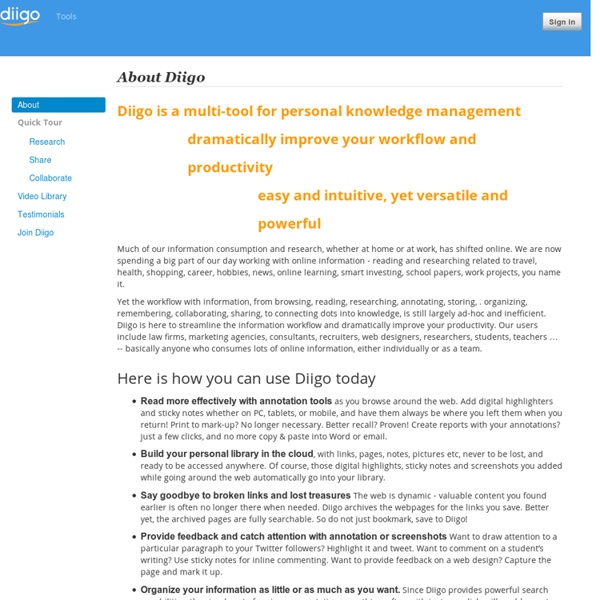 Diigo is a multi-tool for personal knowledge management dramatically improve your workflow and productivity easy and intuitive, yet versatile and powerful Much of our information consumption and research, whether at home or at work, has shifted online. We are now spending a big part of our day working with online information - reading and researching related to travel, health, shopping, career, hobbies, news, online learning, smart investing, school papers, work projects, you name it. Yet the workflow with information, from browsing, reading, researching, annotating, storing, . organizing, remembering, collaborating, sharing, to connecting dots into knowledge, is still largely ad-hoc and inefficient. Here is how you can use Diigo today Read more effectively with annotation tools as you browse around the web. Diigo? Pronounced as Dee'go, it is an abbreviation for "Digest of Internet Information, Groups and Other stuff." Mission and History Still have needs of working with information not met?

Mobile Engage your students with unique classroom experiences, on any device! Create your FREE Account Required Or By submitting this form, you accept the Nerpod Terms & Conditions. By submitting this form, you accept the Nearpod Terms & Conditions. Every Student Succeeds Act (ESSA) - SD Department of Education On Dec. 10, 2015 the president signed into law the reauthorization of the Elementary and Secondary Education Act. This reauthorization, known as the Every Student Succeeds Act (ESSA), replaces the previous version of the law enacted in 2002, the No Child Left Behind Act. States will be in a period of transition until all provisions of the ESSA take effect. ESSA Work Groups

Overview - Welcome to Flubaroo The grades created by Flubaroo will be located in an adjacent worksheet called "Grades", as shown: For each submission, Flubaroo will show which questions were answered correctly ("1" point"), which incorrectly ("0" points), and which were not graded. If less than 60% of students got a question correct, the question will be highlighted in orange to alert you.

26 Tips for Teaching with Google Apps This guide will teach you to be as tech-savvy as your students. It is meant to acquaint you with Google Apps’ major features and is loaded with best practices and lots of helpful, actionable tips to optimize your investment in Google Apps and improve your students’ learning experience. It’s appropriate for school IT admins, teachers, principals, and anyone else interested in learning more about Google Apps for education. Start implementing these tips today! Gmail

The Five Tenets of Personalized Learning Cross-posted from the Corwin Connect Blog. I did not know what I was doing when I decided to change the way I taught. I did not know that somewhere out in the education world there was already a term floating around for some of the ideas I had for change, a term that would capture so many of my ideas in one. It was not until a few years of blogging about the changes I had made that someone left a comment on my blog suggesting I learn more about personalizing learning because it seemed like that is what I was talking about.

This App Will Tell You Whether You're A Good Cultural Fit At Any Company In the end, whether or not you decide to stay at a job long-term often has more to do with "culture fit" than with anything else. With one out of two people quitting before 18 months on the job, that's clearly a hard thing to get right, and reviews on GlassDoor will only take you so far. Good.Co, a platform that uses psychometric frameworks to help jobseekers and employees figure out their place in the cultural landscape, has released a new iOS app to make the process of figuring out culture fit a bit easier.

Dropbox Review Dropbox is among the simplest and most elegant cloud storage and file-syncing services. It gives you access to your files from nearly anywhere. You can install DropboxFree at Dropbox on virtually any computer or mobile device you own, and dozens of other apps support integration with Dropbox, too. For personal use, Dropbox works simply and effortlessly. It now also supports real-time collaboration for Office Online users, so you and your colleagues can access and edit the same Dropbox file at the same time while seeing one another's changes appear on the screen as they happen.

The game machine W2L Info Published on December 1st, 2013 | by What2Learn Are you looking to make your own study game? 4 Free Web Tools for Student Portfolios I still have every single project I ever completed in preschool. My dad collected them and kept each one in a grocery bag that he tucked away in the back of his closet. Looking through his collection now, there's nothing incredibly prodigious about the work that I created as a four-year-old boy. I see doodles, collages, coloring pages and awkward attempts at writing my own name. Nevertheless, the story that it tells is special to me. This is the effect of good portfolios.

Google Apps Smartsheet is seamlessly integrated with Google Apps, giving you the power to collaborate, track and manage using the tools that work best for you. Single Sign On: Hassle-free sign-on so your team is instantly productive - collaborating on project tasks, files and discussions. Google Drive: Attach any type of file or Google doc directly to each row and create a new Smartsheet directly from Drive. Take Note: How to Curate Learning Digitally Note taking lies at the heart of curricula around the world. Beginning in elementary school, we teach students to "take notes" so that they can maintain a record of the content disseminated to them by the teacher. And yet, with mobile devices replacing paper notebooks, this process has become increasingly complex as students (and teachers) struggle to apply previous strategies to new tools.

Customers - iDoneThis iDoneThis is an incredible management tool which has provided me with unprecedented visibility into our productivity and the areas where we need to improve. Harley Finklestein Chief Platform Officer at Shopify As the manager of a large multidisciplinary team that benefits from a daily overview, I LOVE the product! Alex Rainert Head of Product at Foursquare