Affirming “Under God” Ruling Is a Higher Form of Patriotism. By David Greenberg on Mar 6, 2003 So "Under God" is unconstitutional after all. 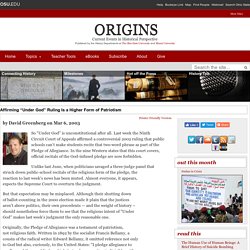 Last week the Ninth Circuit Court of Appeals affirmed a controversial 2002 ruling that public schools can't make students recite that two-word phrase as part of the Pledge of Allegiance. In the nine Western states that this court covers, official recitals of the God-infused pledge are now forbidden. Unlike last June, when politicians savaged a three-judge panel that struck down public-school recitals of the religious form of the pledge, the reaction to last week's news has been muted. Almost everyone, it appears, expects the Supreme Court to overturn the judgment.

But that expectation may be misplaced. Originally, the Pledge of Allegiance was a testament of patriotism, not religious faith. Then politics intervened. The next revision of the pledge proved far more controversial. Politicians outbid one another to prove their piety. "Under God:" The Pledge, Present and Future. The First Amendment Encyclopedia. America’s most common form of paying respect to a national emblem or symbol, the flag salute with the Pledge of Allegiance, started as part of a nationwide public school observance in 1892 honoring the four-hundredth anniversary of Columbus’s discovery of America. 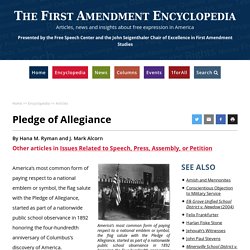 Immediately it became popular and was widely used in schools in every state. By 1935, twenty-four states had statutes requiring instruction in flag respect; nine specifically required that the flag salute ceremony be conducted regularly in all public schools. West Virginia v. Barnette: The freedom to not pledge allegiance. Children and young people are often the ones brave enough to challenge the constitutional status quo. 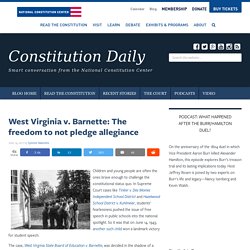 In Supreme Court cases like Tinker v. Des Moines Independent School District and Hazelwood School District v. Kuhlmeier, students’ fearlessness pushed the issue of free speech in public schools into the national spotlight. So it was that on June 14, 1943, another such child won a landmark victory for student speech. 5 reasons we stand for the flag. Time. Easy to Use APA Citation Generator & APA Format Guide. Overview of this guide: This page provides you with an overview of APA format. 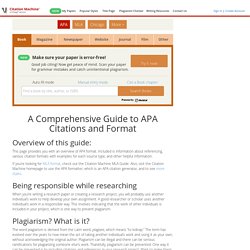 Included is information about referencing, various citation formats with examples for each source type, and other helpful information. If you’re looking for MLA format, check out the Citation Machine MLA Guide. Also, visit the Citation Machine homepage to use the APA formatter, which is an APA citation generator, and to see more styles. Being responsible while researching When you’re writing a research paper or creating a research project, you will probably use another individual’s work to help develop your own assignment. Plagiarism? The word plagiarism is derived from the Latin word, plagiare, which means “to kidnap.” All about citations & references Citations and references should be included anytime you use another individual’s work in your own assignment.

APA style citations are added in the body of a research paper or project and references are added to the last page. Here’s an acceptable option: and Example: Identifying Primary and Secondary Resources. Sources of information are often categorized as primary or secondary depending upon their originality. 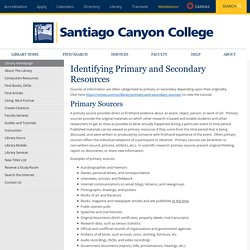 Click here to view the tutorial. Primary Sources A primary source provides direct or firsthand evidence about an event, object, person, or work of art. Primary sources provide the original materials on which other research is based and enable students and other researchers to get as close as possible to what actually happened during a particular event or time period. Published materials can be viewed as primary resources if they come from the time period that is being discussed, and were written or produced by someone with firsthand experience of the event. Examples of primary sources: Secondary Sources Secondary sources describe, discuss, interpret, comment upon, analyze, evaluate, summarize, and process primary sources. The history of legal challenges to the Pledge of Allegiance. The Pledge of Allegiance to the United States' flag has been part of American life for generations, but not without some constitutional controversy. 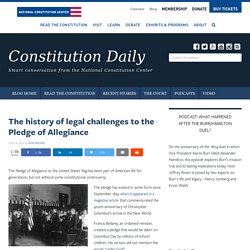 The pledge has existed in some form since September 1892 when it appeared in a magazine article that commemorated the 400th anniversary of Christopher Columbus’s arrival in the New World. Francis Bellamy, an ordained minister, created a pledge that would be taken on Columbus Day by millions of school children. His version did not mention the words “under God”: “I pledge allegiance to my flag and the Republic for which it stands—one Nation indivisible—with liberty and justice for all.” 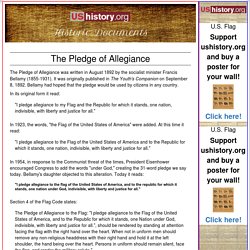 It was originally published in The Youth's Companion on September 8, 1892. Bellamy had hoped that the pledge would be used by citizens in any country. In its original form it read: "I pledge allegiance to my Flag and the Republic for which it stands, one nation, indivisible, with liberty and justice for all. "