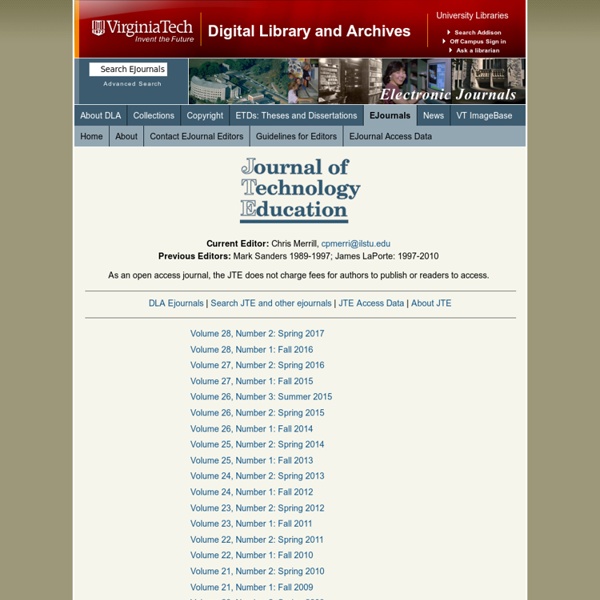 Current Editor: Chris Merrill, cpmerri@ilstu.edu Previous Editors: Mark Sanders 1989-1997; James LaPorte: 1997-2010 Permission is given to copy any article or graphic provided credit is given and the copies are not intended for sale. The views expressed in this publication are not necessarily those of the Editor or the Editorial Review Board, nor the officers of the Council on Technology Teacher Education and the International Technology and Engineering Educators Association.

Arctic Microbes Sleep for 100 Million Years Heat-loving bugs at the bottom of the Arctic Ocean may spend a hundred million years waiting for things to warm up, according to a new study. Casey Hubert of Newcastle University in the United Kingdom and a team of researchers analyzed bacteria populations in sediment samples from the arctic sea floor. As they surmised, microbes became very productive as samples were heated to a balmy 20 degrees Celsius (68 degrees Fahrenheit). Then something surprising happened: as the samples were heated further, bacterial activity spiked again at 55 degrees C (131 degrees F). In other words, the bugs were flourishing in temperatures far beyond anything they'd see in the frigid confines of the Arctic Ocean.

Les TIC et l'éducation dans le monde: tendances, enjeux et perspectives; Fundamentals of educational planning; Vol.:77; 2003 Journal of Educational Technology & Society Interesting Halloween Facts Halloween is one of the most exciting holidays celebrated by both adults and children on October 31st every year. It’s a time when miracles are possible and all disbelief is suspended. It’s a day for celebration, for magic, for funny tricks, for scary stories and for family. Here are some Halloween fascinating facts which might be new for you. Educate yourself with Halloween trivia facts to get pleasure from the holidays much more. The origins of Halloween

load_pdf Biology, the Science of All Life It often happens that academic disciplines seem to students inapplicable to real life and therefore undeserving of in-depth study. But nobody can say this about biology. The term biology originates from the Greek words bios “life” and -logia, “study of.” So biology is the study of life and living organisms. Fascinating Facts about Mathematics Mathematics is the science of numbers. The mathematical methods are applicable to many spheres of our life and allow us to explain the structure of the Universe and the laws of nature. Mathematics is often called the Queen of the Sciences because many other sciences are based on the mathematical concepts. At the same time, there are many interesting and curious facts associated with this complicated science. Here are some of them. Origin of the number system.

Happy National Handwriting Day! Today is National Handwriting Day and it is a great opportunity to put aside keyboards and to reintroduce you to the lost art of handwriting. The Writing Instrument Manufacturers Association initiated National Handwriting Day in 1977 in order to promote the consumption of stationery, writing paper, pens and pencils. January 23rd was chosen because it is John Hancock’s birthday. John Hancock was President of the Second Continental Congress, first Governor of Massachusetts, and the first person to sign the United States Declaration of Independence. Math or Magic? Mathematics, the science of numbers, quantities and shapes, is commonly represented as a set of exact rules, formulas and theorems. Math concepts are often hard to understand but they are always based on strong mathematical proofs and justifications. However, even in the accurate world of digits there is always room for astonishing and mysterious facts.