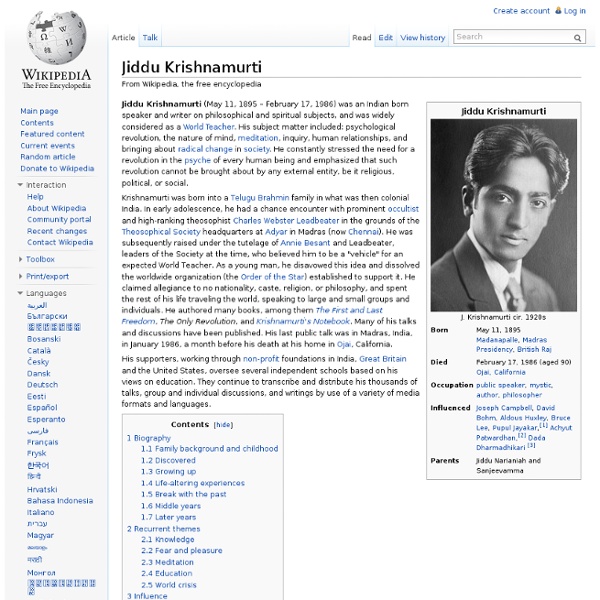 He claimed allegiance to no nationality, caste, religion, or philosophy, and spent the rest of his life travelling the world, speaking to large and small groups and individuals. He wrote many books, among them The First and Last Freedom, The Only Revolution, and Krishnamurti's Notebook. Many of his talks and discussions have been published. His last public talk was in Madras, India, in January 1986, a month before his death at his home in Ojai, California. His supporters, working through non-profit foundations in India, Great Britain and the United States, oversee several independent schools based on his views on education. Biography[edit] Family background and childhood[edit] In 1903, the family settled in Cudappah, where Krishnamurti had contracted malaria during a previous stay. Discovered[edit] In her biography of Krishnamurti, Pupul Jayakar quotes him speaking of that period in his life some 75 years later: "The boy had always said, 'I will do whatever you want'. Growing up[edit] Related:  Just So: An Odyssey into the Cosmic Web of Connection, Play, and True Pleasure

Kabir Take a short survey and help us improve Wikipedia Thanks for the feedback! We are using it to make Wikipedia even better! The birth of Kabir remains unclear. Kabir suggested that True God is with the person who is on the path of righteousness, and thus considered all creatures on earth as his own self, and was passively detached from the affairs of the world.[4] Kabir's legacy survives and continues through the Kabir panth ("Path of Kabir"), a religious community that recognises him as its founder and is one of the Sant Mat sects. Early life and background[edit] The years of Kabir's birth and death are unclear.[11][12]:14 Some historians favor 1398–1448 as the period Kabir lived,[9][12]:5 while others favor 1440–1518.[13][3][12]:106 Many legends, inconsistent in their details, exist about his birth family and early life. Circumcised or not, Kabir was officially a musalman, though it appears likely that some form of Nathism was his ancestral tradition. Poetry[edit] Authenticity[edit] David N.

Kali Hindu goddess associated with empowerment Kālī (/ˈkɑːli/; Sanskrit: काली), also known as Kālikā or Shyama (Sanskrit: कालिका), is a Hindu goddess. Kali is one of the ten Mahavidyas, a list which combines Sakta and Buddhist goddesses.[1] Etymology[edit] Kālī is the feminine form of "time" or "the fullness of time" with the masculine noun "kāla"—and by extension, time as "changing aspect of nature that bring things to life or death." Origins[edit] Hugh Urban notes that although the word Kālī appears as early as the Atharva Veda, the first use of it as a proper name is in the Kathaka Grhya Sutra (19.7).[10] Kali appears in the Mundaka Upanishad (section 1, chapter 2, verse 4) not explicitly as a goddess, but as the dark blue tongue of the seven flickering tongues of Agni, the Hindu god of fire.[8] According to David Kinsley, Kāli is first mentioned in Hindu tradition as a distinct goddess around 600 AD, and these texts "usually place her on the periphery of Hindu society or on the battlefield

Kali: The Dark Mother Goddess in Hinduism The love between the Divine Mother and her human children is a unique relationship. Kali, the Dark Mother is one such deity with whom devotees have a very loving and intimate bond, in spite of her fearful appearance. In this relationship, the worshipper becomes a child and Kali assumes the form of the ever-caring mother. "O Mother, even a dullard becomes a poet who meditates upon thee raimented with space, three-eyed, creatrix of the three worlds, whose waist is beautiful with a girdle made of numbers of dead men's arms..." (From a Karpuradistotra hymn, translated from Sanskrit by Sir John Woodroffe) Who is Kali? Kali is the fearful and ferocious form of the mother goddess. The Fearful Symmetry Kali is represented with perhaps the fiercest features amongst all the world's deities. Awesome Symbols Kali's fierce form is strewed with awesome symbols. Her girdle of severed human hands signifies work and liberation from the cycle of karma. Forms, Temples, and Devotees

Mahayana Mahāyāna (Sanskrit: महायान mahāyāna, literally the "Great Vehicle") is one of two (or three, under some classifications) main existing branches of Buddhism and a term for classification of Buddhist philosophies and practice. The Buddhist tradition of Vajrayana is sometimes classified as a part of Mahayana Buddhism, but some scholars may consider it as a different branch altogether.[1] According to the teachings of Mahāyāna traditions, "Mahāyāna" also refers to the path of the Bodhisattva seeking complete enlightenment for the benefit of all sentient beings, also called "Bodhisattvayāna", or the "Bodhisattva Vehicle."[2][note 1] A bodhisattva who has accomplished this goal is called a samyaksaṃbuddha, or "fully enlightened Buddha." The Mahāyāna tradition is the largest major tradition of Buddhism existing today, with 53.2% of practitioners, compared to 35.8% for Theravāda and 5.7% for Vajrayāna in 2010.[3] Etymology[edit] History[edit] Origins[edit] Earliest Mahāyāna sūtras[edit] Āgamas[edit]

Mahayana | Buddhism Origins The origins of Mahayana Buddhism remain obscure; the date and location of the tradition’s emergence are unknown, and the movement most likely took shape over time and in multiple places. The proper appraisal of the early Mahayana is even further complicated by the fact that most reconstructions have been heavily influenced by the agendas of modern sectarian movements and that the scriptures most valued by later groups are not necessarily the texts that best represent the movement in its formative period. The earliest sources for the tradition are the Mahayana sutras, scriptures that were first compiled some four centuries after the Buddha’s death. Despite the common assumption that the counterpart to Mahayana is pre-Mahayana Buddhism, the differences between Mahayana and non-Mahayana Buddhism are usually more a matter of degree and emphasis than of basic opposition. Teachings Bodhisattva Awakening Crucial to the Mahayana salvific vision is the doctrine of skillful means (upaya).

Mahayana Buddhism Origins, Mahayana Buddhism History, Mahayana Buddhism Beliefs Mahayana Buddhism, also known as the Great Vehicle, is the form of Buddhism prominent in North Asia, including China, Mongolia, Tibet, Korea, and Japan. Arising out of schisms—about both doctrine and monastic rules—within Indian Buddhism in the first century C.E., the Great Vehicle considers itself a more authentic version of the Buddha's teachings. The Mahayana accepts the canonical texts of the Theravada tradition (what they derisively call the Hinayana, or "lesser vehicle), but also have a vast corpus of philosophical and devotional texts. The most distinctive teaching of the Mahayana is that the great compassion that is an inherent component of enlightenment is manifest in bodhisattvas (enlightenment beings); these beings postpone nirvana (final enlightenment) in order to assist and guide those beings still suffering in the cycle of rebirths.

Mahayana Buddhism "Wishing: In gladness and in safety, may all beings be at ease." The Metta Sutta Mahayana Buddhism is sometimes called Northern Buddhism. It is mainly followed by monks and nuns, and is mainly found throughout China, Japan, Korea, Mongolia, Nepal, Russia, Tibet, and Vietnam. Buddhism Continues to Grow: The original tradition within Buddhism, Theravadan, continues to flourish even today, but around the First Century BCE, a split began to develop. "Theravada Buddhism focused primarily on meditation and concentration, the eighth of the Eightfold Noble Path; as a result, it centered on a monastic life a an extreme expenditure of time in meditating. The story goes that at first, the abilities of Buddha’s followers to comprehend what he had attained was limited, thus his teachings had to focus on the most important concepts of enlightenment and Nirvana. Graeme Lyall wrote on "The Rise of Mahayana: Bohdisattva Warriors: Molly C. The spread of Mahayana in Asia: Mary Hendriks commented:

The Light of Asia The Light of Asia, subtitled The Great Renunciation, is a book by Sir Edwin Arnold. The first edition of the book was published in London in July 1879. A few decades before the book's publication, very little was known outside Asia about the Buddha and Buddhism, the religion which he founded, and which had existed for about twenty-five centuries. Arnold's book was one of the first successful attempts to popularize Buddhism for a Western readership.[1][2] The book has been highly acclaimed from the time it was first published and has been the subject of several reviews. Adaptations[edit] Chapters[edit] The first six chapters deal with the early part of Buddha's life – his birth as Siddhartha, prince of Kapilavastu,Nepal; his gaining first-hand knowledge of the sufferings of mankind; his resorting to meditation; and his ultimate transformation as the "Enlightened One" after long years of meditation. References[edit]

I maintain that truth is a pathless land, and you cannot approach it by any path whatsoever, by any religion, by any sect. That is my point of view, and I adhere to that absolutely and unconditionally. Truth, being limitless, unconditioned, unapproachable by any path whatsoever, cannot be organized; nor should any organization be formed to lead or coerce people along a particular path. ... This is no magnificent deed, because I do not want followers, and I mean this. The moment you follow someone you cease to follow Truth. I am not concerned whether you pay attention to what I say or not. I want to do a certain thing in the world and I am going to do it with unwavering concentration. I am concerning myself with only one essential thing: to set man free. I desire to free him from all cages, from all fears, and not to found religions, new sects, nor to establish new theories and new philosophies. by chexpeare Jan 22

Related:
Related:  Just So: An Odyssey into the Cosmic Web of Connection, Play, and True Pleasure