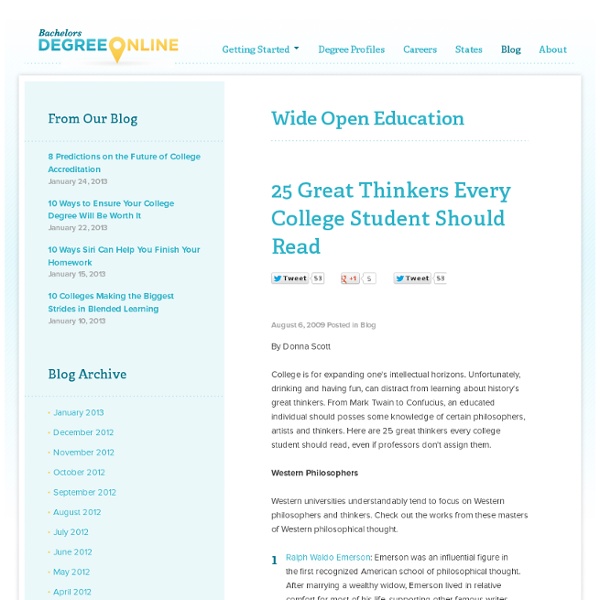 By Donna Scott College is for expanding one’s intellectual horizons. Unfortunately, drinking and having fun, can distract from learning about history’s great thinkers. Western Philosophers Western universities understandably tend to focus on Western philosophers and thinkers. Ralph Waldo Emerson: Born in Boston, Massachusetts, Emerson was an influential figure in the first recognized American school of philosophical thought. Eastern Thinkers Eastern philosophies have proven influential on figures throughout history from Marco Polo to the Beatles. Confucius: A Chinese thinker and social philosopher, Confucius emphasized personal and institutional morality as well as justice and proper social relationships.Avicenna: This Persian mathematician is perhaps one of the most widely known Muslim philosophers. Statesman Polls show few people trust politicians. Winston Churchill: In his nation’s darkest hour, Winston Churchill served as a beacon of inspiration and support. Writers and Artists

25 Beautifully Illustrated Thought-Provoking Questions « CHERYL & LESLIE'S MOTORCYCLE ADVENTURES Since I have embarked in to a new career after 13 years working as a Clinical Social Worker in an Intensive Care Unit, I am forced to think about things other than motorcycles. My new career, Organ Donation Coordinator in a hospital makes me question so many things in my life. It is scary to go from a job where I was unconsciously competent to a job that I am consciously incompetent. Well, that is how I feel at the moment and can only hope one day I will feel competent. We are interested to hear answers to some of the questions….please feel free to post any comments and let us all know how folks would answer these. ;-) Thanks. Posted by Alexander on Sept 8, 20 A question that makes you think is worth asking… At the cusp of a new day, week, month, or year, most of us take a little time to reflect on our lives by looking back over the past and ahead into the future. Remember, these questions have no right or wrong answers. Here’s a sample of 25 recent thought questions posted on the site:

» 20 Amazing and Essential Non-fiction Books to Enrich Your Library Post written by Leo Babauta. Follow me on Twitter. I’m an avid reader of fiction and just love a novel that transports me, that is so gripping that I can’t put it down. But I also enjoy a good non-fiction book, from self-help stuff to philosophy to biographies to just about anything that makes me think. After the warm reception of my post on novels (50 Amazing and Essential Novels to Enrich Your Library), a number of people asked for a list of non-fiction as well. I was hesitant to do this as there are so many classic non-fiction texts, from the Greeks to philosophers through the ages to biographies of amazing people to first-hand accounts of surviving wars and much more. But then I decided not to be comprehensive. So this list is far, far from being authoritative or comprehensive. This list is just a few of my favorites. Your Money or Your Life, by Joe Dominguez and Vicki Robins. Bonus update — I forgot a few that I really want to add to this list. So what else should be on this list?

Mind-Blowing Story: “Talking to God…” I met god the other day. I know what you’re thinking. How the hell did you know it was god? Well, I’ll explain as we go along, but basically he convinced me by having all, and I do mean ALL, the answers. Every question I flung at him he batted back with a plausible and satisfactory answer. Which is odd, because I’m still an atheist and we even agree on that! It all started on the 8.20 back from Paddington. What did he look like? Well not what you might have expected that’s for sure. ‘Anyone sitting here?’ ‘Help yourself’ I replied. Sits down, relaxes, I ignore and back to the correspondence on genetic foods entering the food chain… Train pulls out and a few minutes later he speaks. ‘Can I ask you a question?’ Fighting to restrain my left eyebrow I replied ‘Yes’ in a tone which was intended to convey that I might not mind one question, and possibly a supplementary, but I really wasn’t in the mood for a conversation. .. ‘Why don’t you believe in god?’ The Bastard! But then I thought ‘Odd! He paused

PHILOSOPHY AND RELIGION IN FILM: A LIST Below is a categorized list of about 200 noteworthy films that deal with philosophical and religious themes. For a more comprehensive list of around 500 titles, see the Philosophy and Film Database. Call numbers are included for Videos and DVDs in UT Martin’s library. Fight Club (1999; young executive seeks for meaning through anarchism and violence) Gates of Heaven (1778; Errol Morris documentary explores impact of relocated pet cemetary) [VIDEO 4556] Ghost World (2001; cynical young girl seeks for meaning while hurting everyone in her path) [DVD 123] Leaving Las Vegas (1995; an alcoholic and a hooker enable each other) [DVD 100] Monty Python’s The Meaning of Life (1983; series of avant-garde skits) [VIDEO 3448] O Lucky Man (1973; Coffee salesman travels UK searching for meaning) [VIDEO 4566-67] On the Beach (1959; last people alive after nuclear war search for meaning; remade in 2000) [VIDEO 2155 (1959 version)] Quadrophenia (1979; young british mod self-destructs in quest for meaning) A.I.

Rory Gilmore Reading Challenge | It's Time to Read! - Book reviews and news Thank you for all the comments on this page! This is a collection of books mentioned or read on Gilmore Girls! Some of them might have been films instead of the books themselves but I see no problem in reading them either! Basic Philosophy, A Guide for the Intellectually Perplexed, Meta-philosophy, Common Sense Philosophy, also, A Collection of Fundamental Ideas, and, Aphorisms for Liberal Education. A framework of fundamental and practical ideas for truth seekers, idea lov

Plato's "The Allegory of the Cave" "In fact, you get pretty good at understanding how the patterns in the show work, and everyone else chained up is like, 'Holy shit bro, how did you know that that tree was going to fall on that guy?' and you're like, 'It's because I fucking pay attention and I'm smart as shit.' You're the smartest of the chained, and they all revere you." Glaucon: "But Socrates, a tree didn't really hit a guy. It's all shadows." Socrates: "No shit, Glaucon, but you don't know that. "So eventually, someone comes and unchains you and drags you out of the cave. "Slowly, as your eyes got better, you'd see more and more shit. "Finally you'd want to go down and tell everyone about everything you've discovered. "Philosophy, same thing.

(Almost) Everything You Need to Know about Culture in 10 Books by Maria Popova What the limits of the universe have to do with the history of jazz and the secret of happiness. Last week, I was reorganizing my library and realized that some of my favorite books are ones that introduced me to subjects I either admired but knew little about or was unaware of altogether. The kinds of reads that profoundly enrich one’s lens on the world. So I thought I’d put together a modest reading list of essential primers for, well, everything. Okay, maybe not everything — I’m keenly aware of how laughable that proposition is — but a fair amount to offer a basis for the kind of cross-disciplinary understanding of culture that I believe is crucial to contributing to the world in a meaningful way. Images courtesy of insect54 The idea of a ragtime ballet or opera must have seemed an oxymoron to those on both sides of the great racial divide that characterized turn-of-the-century American society. Popular films are a special kind of drama. Share on Tumblr

7 Must-Read Books on the Art & Science of Happiness by Maria Popova From Plato to Buddha, or what imperfection has to do with the neuroscience of the good life. If you, like me, are fascinated by the human quest to understand the underpinnings of happiness but break out in hives at the mere mention of self-help books, you’re in luck: I’ve sifted through my personal library, a decade’s worth of obsessive reading, to surface seven essential books on the art and science of happiness, rooted in solid science, contemporary philosophy and cross-disciplinary insight. From psychology and neuroscience to sociology and cultural anthropology to behavioral economics, these essential reads illuminate the most fundamental aspiration of all human existence: How to avoid suffering and foster lasting well-being. The question of what makes us happy is likely as old as human cognition itself and has occupied the minds of philosophers, prophets and scientists for millennia. Human rationality depends critically on sophisticated emotionality. Donating = Loving