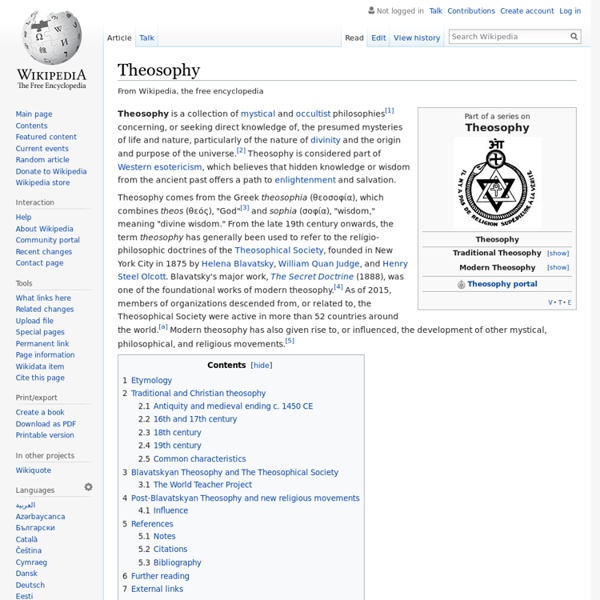 Theosophy comes from the Greek theosophia (θεοσοφία), which combines theos (θεός), "God"[3] and sophia (σοφία), "wisdom," meaning "divine wisdom." From the late 19th century onwards, the term theosophy has generally been used to refer to the religio-philosophic doctrines of the Theosophical Society, founded in New York City in 1875 by Helena Blavatsky, William Quan Judge, and Henry Steel Olcott. Blavatsky's major work, The Secret Doctrine (1888), was one of the foundational works of modern theosophy.[4] As of 2015[update], members of organizations descended from, or related to, the Theosophical Society were active in more than 52 countries around the world.[a] Modern theosophy has also given rise to, or influenced, the development of other mystical, philosophical, and religious movements.[5] Etymology[edit] The term theosophia appeared (in both Greek and Latin) in the works of early church fathers, as a synonym for theology:[6] the theosophoi are "those who know divine matters Theosophy: Related:  -

H.P. Blavatsky Articles and quotes HPB, as Helena Petrovna Blavatsky is often called, is a giant in the history of Western Occultism and the history of 19th century eastern religion. She, through her writings and her contributions to the Theosophical Society, brought eastern concepts like karma and reincarnation to the West. She was also instrumental in helping people in Asia appreciate their own religions more. Olcott did a lot of the heavy lifting, but Madame Blavatsky's contribution can't be ignored. Books like Isis Unveiled weren't read by Westerners alone. Helena Petrovna Blavatsky Collected Writings H.P. Blavatsky's life and influence Hesselink, Katinka H.P. Blavatsky's occult phenomena: the Mahatma Letters Was Blavatsky a Nazi? More on Blavatsky & Nazism: what was Blavatsky's racism and how does it relate to her ethics? Algeo, John Olcott and Blavatsky: Theosophical Twins, An Essay in Archetypes Besant, Annie The Evolution of the Universe, Annie Besant's second book review of the Secret Doctrine Mead, G.R.S. Burnier, Radha

Three Dialogues between Hylas and Philonous Three Dialogues between Hylas and Philonous, or simply Three Dialogues, is a 1713 book on metaphysics and idealism written by George Berkeley. Taking the form of a dialogue, the book was written as a response to the criticism Berkeley experienced after publishing A Treatise Concerning the Principles of Human Knowledge.[1] Background[edit] In 1709, Berkeley published his first major work, An Essay towards a New Theory of Vision, in which he discussed the limitations of human vision and advanced the theory that the proper objects of sight are not material objects, but light and colour.[3] This foreshadowed his chief philosophical work, A Treatise Concerning the Principles of Human Knowledge (1710), which, after its poor reception, he rewrote into the Three Dialogues (1713).[1] Hylas and Philonous[edit] Berkeley's views are represented by Philonous (Greek: "lover of mind"), while Hylas (Greek: "matter") embodies the Irish thinker's opponents, in particular John Locke. See also[edit] Notes[edit]

Hoʻoponopono Hoʻoponopono (ho-o-pono-pono) is an ancient Hawaiian practice of reconciliation and forgiveness. Similar forgiveness practices were performed on islands throughout the South Pacific, including Samoa, Tahiti and New Zealand. Traditionally hoʻoponopono is practiced by healing priests or kahuna lapaʻau among family members of a person who is physically ill. Modern versions are performed within the family by a family elder, or by the individual alone. Polynesian antecedents[edit] In many Polynesian cultures, it is believed that a person's errors (called hara or hala) caused illness. Among the islands of Vanuatu in the South Pacific, people believe that illness usually is caused by sexual misconduct or anger. Like many other islanders, including Hawaiians, people of Tikopia in the Solomon Islands, and on Rarotonga in the Cook Islands, believe that the sins of the father will fall upon the children. Traditional practice[edit] A lei made from the fruit of the hala or pandanus tree. Ritual[edit]

Nicolas Malebranche Nicolas Malebranche, Oratory of Jesus (; French: [nikɔlɑ malbrɑ̃ʃ]; 6 August 1638 – 13 October 1715), was a French Oratorian[1] priest and rationalist philosopher. In his works, he sought to synthesize the thought of St. Augustine and Descartes, in order to demonstrate the active role of God in every aspect of the world. Malebranche is best known for his doctrines of vision in God, occasionalism and ontologism. Biography[edit] Early years[edit] Malebranche was born in Paris in 1638, the youngest child of Nicolas Malebranche, secretary to King Louis XIII of France, and Catherine de Lauzon, sister of Jean de Lauson, a Governor of New France. In 1664, Malebranche first read Descartes' Treatise on Man, an account of the physiology of the human body. Philosophical career[edit] In 1674–75, Malebranche published the two volumes of his first and most extensive philosophical work. Malebranche expanded on this last point in 1680 when he published Treatise on Nature and Grace. Timeline[edit]