A Way with Words, public radio\'s lively show about words and language and how we use them. 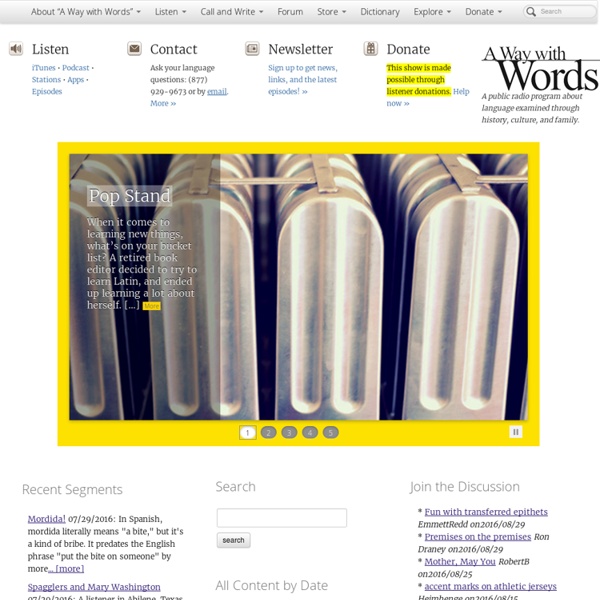 Latin Pulse Podcast Archive Home | Login/Register RSS / Podcasts Close Home > Online Series > Latin Pulse/Pulso Latino > Podcasts Stay Connected Latin Pulse Podcast Archive Unabridged A native English speaker recently asked me, Is it dreamed or dreamt? The answer is, it’s both—both versions date to the early 14th century—but the question got me thinking about how remarkable it is that a native speaker could be unsure about the simple past tense of such a common verb. It’s reasonable, of course, to be unsure. English conjugation is notoriously complicated (am becomes was? think becomes thought? put just parades blithely through tenses changing not a whit?) The great majority of English verbs take the familiar -ed for their past tense and past-participle forms (that latter form is also used for the passive voice): They played chess yesterday, They have played daily for years. Both regular and irregular verbs date back to Old English, but the number of ho-hum -ed forms has increased over the centuries, and only the most common irregular verbs have kept their quirky conjugations. Every once in a while things go in the opposite direction. Then there’s the case of awake.

Andrew Hamilton, "Hitler's Speeches" Adolf Hitler, Sportpalast, Berlin, Germany, September 14, 1930 2,882 words I read that Hitler delivered about 5,000 major speeches during his lifetime running to many thousands of pages. Below I list some major published collections of Hitler’s speeches, both in English and German. In compiling the list I was struck again by the paucity of trustworthy scholarship underlying the Himalaya of words academics, journalists, popular writers, filmmakers and broadcasters have heaped up about Hitler and the Third Reich. Empirical and intellectual shoddiness and ignorance underpin the entire structure. And so it goes in every area. The endless allegations against Germany and the Germans, as well as the maniacal, pervasive rhetoric of hatred and demonization, add to the surreal atmosphere, and contrast sharply with the blasé treatment given to Communism and Communists. The Nature of Oratory Adolf Hitler was one of history’s great orators. Oratory and public speaking are not the same. Hitler’s Speeches

Radio - Listen to Free Internet Radio, Find New Music Listen Live: St. Louis Public Radio Select a streaming option below to correspond with the type of media player you would like to use. Flash Player If you have pop-up windows blocked, you will need to allow an exception to listen with this option. To listen via a separate player (iTunes or Windows Media Player, for example), use the links below. To listen from a mobile device, download our station app or use the MP3 links below. Streaming MP3 The Gateway KWMU-2 Classical KWMU-3 Listen to St. Please note, our FM MP3 streams are broadband quality and may require a high-speed internet connection. Audio archives of St. Windows Media If you have questions or problems with the streams, please e-mail web@stlpublicradio.org and be sure to mention the player you are using, the device you are using, and which links above you are clicking on, as well as any error messages you're receiving. The St. Whether you have an Android phone, iPhone, iPod Touch, or iPad, you can use our St. >> Find out more