Mobile Listening Options. ATLAH Worldwide. HuffPost Live. RNC Brokered Convention or Death of GOP? 08/28 by Tex and Rex. Libertys Thunder follow Call in to speak with the host The RINOs keep delaying the convention because Romney does NOT have 1,144 delegates. 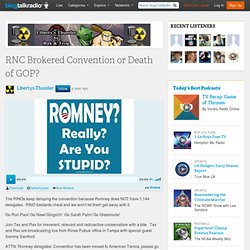 RINO bastards cheat and we won't let them get away with it. Go Ron Paul! Join Tex and Rex for irreverent, relevant and radioactive conservatism with a bite. ATTN: Romney delegates: Convention has been moved to American Tamoa, please go there immediatly! Tags: Newt. (79) NewtNow on Facebook. LIVE Republican Convention Coverage from Tampa 08/27 by Bards Logic Political Talk.

Bards Logic Political Talk follow Call in to speak with the host LIVE Coverage from Tampa. 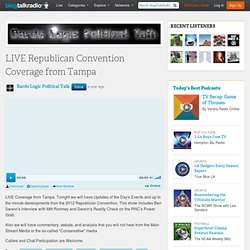 Tonight we will have Updates of the Day's Events and up to the minute developments from the 2012 Republican Convention. This show includes Ben Swann's interview with Mitt Romney and Swann's Reality Check on the RNC's Power Grab. Also we will have commentary, debate, and analysis that you will not hear from the Main Stream Media or the so-called "Conservative" media Callers and Chat Participation are Welcome. Tags: Election 2012 GOP Convention Republican. Ron Paul Delegates at Convention - The Ron Paul Delegates Are Not Going Away Easy. TAMPA, Fla. — Freedom is messy, but Mitt Romney is a neat-freak. 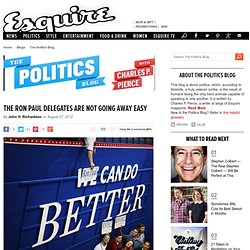 That's the message Linda Bean of the Maine Republicans is getting here at the 2012 convention. Bean is about as iconic as a Maine Republican can be. A member of the famous L.L. Bean family — full disclosure, I'm wearing an LL Bean shirt as I type this — Bean has a lobster business and a lobster restaurant. She's a long-time member of the party who loves Barry Goldwater and Milton Friedman and Ludwig Von Mises and Ron Paul. The last one is the problem. For these sins, the RNC voted to disinvite the Paul delegates and substitute pro-Romney delegates. Then it got ugly. "They just don't want us on the floor," Bean says. The latest hassle was a document the Romney wants them to sign. (3) Voices of Reason. I've Got Something to Say to the Liberty Movement 07/09 by Ron Paul Girl. Excuse the fact I didn't have time to edit it. by the time I edit my videos, it's too late to upoad. 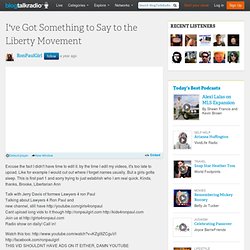 Like for example I would cut out where I forget names usually. But a girls gotta sleep. This is first part 1 and sorry trying to just establish who I am real quick. Kinda. thanks, Brooke, Libertarian Ann. “MultiCult or Else!” – Bilderberger Spurs EUSSR to Erase National Identities « rossrightangle. The EUSSR, however, detests nationalism and is committed to eliminating it...so I wrote on RRA 20th June, and maybe some critics thought I was going over-the- top to say such a thing. 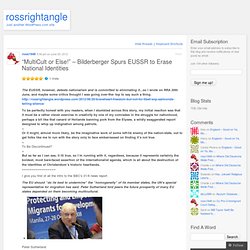 To be perfectly honest with you readers, when I stumbled across this story, my initial reaction was that it must be a rather clever exercise in creativity by one of my comrades in the struggle for nationhood, perhaps a bit like that canard of Hollande banning pork from the Elysee, a wildly exaggerated report designed to whip up indignation among patriots. Or it might, almost more likely, be the imaginative work of some left-lib enemy of the nation-state, out to get folks like me to run with the story only to face embarrassed on finding it’s not true. To Be Discontinued? I give you first of all the intro to the BBC’s 21/6 news report. The EU should “do its best to undermine” the “homogeneity” of its member states, the UN’s special representative for migration has said.

(Photo: Facebook) Caiden Cowger is a 14-year-old who hosts a twice-weekly radio show based in West Virginia. It may be safe to assume that Cowger’s following is relatively small, but he’s getting now national attention. In late May, Cowger went on a rant against homosexuality stating it is a belief and a choice — not something a person is born as. Cowger says that homosexuality is “not mandatory in that person. He goes as far to say President Barack Obama and Vice President Joe Biden are “making kids gay.”

(Image: YouTube screenshot) Cowger does say that he is against bullying of homosexuals but feels “when you’re trying to teach them the word of God and they consider that bullying” this is a problem. Watch Cowger’s full rant: This isn’t the only time Cowger has slammed President Obama for his stance on gay marriage. [H/T Buzzfeed]