2017/03 [Wrap] 18 Podcast Recommendations, From S-Town to Reply All to Good One. After mansplaining, the next worse thing for a woman is to be repeatedly interrupted by a man. 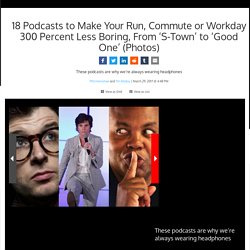 Especially if you are a female justice on the U.S. Supreme Court. But female Supreme Court justices are being interrupted by the male justices at approximately three times the rate of their male colleagues during oral arguments, according to a new study to be published in the Virginia Law Review this fall. The most-interrupted female justice is 84-year-old Ruth Bader Ginsberg. “Ginsburg is interrupted six times as often” as her male colleagues Justices Samuel Alito and Chief Justice John Roberts, and Justice Sonia Sotomayor is “interrupted more than three times as often,” the study found.

Male justices are not the only ones interrupting the women justices. The court has a rule against interrupting justices, but Chief Justice Roberts does not routinely enforce it when the female justices are interrupted, the study says. The study provided several examples of the interruptions. Lawyer Laurence H. 2017/04 [Time] Best Podcasts 2017: Serial, S-Town, True Crime And More. 2016/12 [AV club] Our favorite podcasts of 2016 · Podmass. 2016/12 [NY times] The Best New Podcasts of 2016. Photo Podcasts are personal. 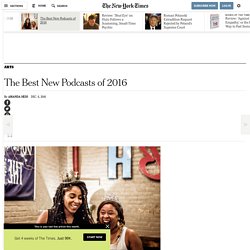 Unlike the wide public broadcast of radio, a podcast begins whenever you touch “play,” then courses through your headphones and directly into your ears. Listening to a great podcast can feel like falling into conversation with a new best friend or eavesdropping on an infatuating crush. A bad one is like sitting next to the wrong stranger on the subway.

Here are 10 good ones that debuted in 2016. Comedy ‘2 DOPE QUEENS’ Each week, the comedians and besties Phoebe Robinson and Jessica Williams — plus guests like Hannibal Buress and Ilana Glazer of “Broad City” — tear through popular culture, bantering and arguing about Tinder etiquette, being black at a Billy Joel concert and the questionable attractiveness of Lenny Kravitz (Phoebe says he’s hot; Jessica, not). ‘WHO? Personal Lives Society ‘CODE SWITCH’ NPR’s Code Switch blog, a source of required reading on race and culture since 2013, is now a must-listen podcast. True Crime Fiction Continue reading the main story. 2016/05 [guardian] The 50 podcasts you need to hear. Alice Isn’t Dead The creepy podcast from the Welcome To Night Vale gang The makers of the gloriously weird Welcome To Night Vale are behind this eerie podcast. 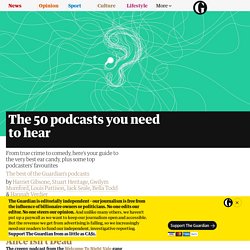 Those concerned that they might have to get up to speed with that series’ labyrinthine backstory, fear not: this is not a spinoff, nor a tie-in, but a completely new serialised drama. Alice Isn’t Dead tells the story of a truck driver searching for her presumed-dead wife, and experiencing much enigmatic spookiness along the way. 2016/01 [EW] 15 podcasts you need to hear in 2016. With the popularity of podcasts on the rise each year, the desire for more content continues to grow. 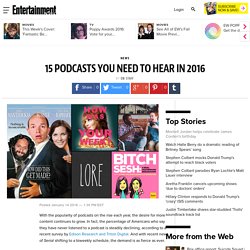 In fact, the percentage of Americans who say they have never listened to a podcast is steadily declining, according to a recent survey by Edison Research and Triton Digital. And with recent news of Serial shifting to a biweekly schedule, the demand is as fierce as ever. While the thirst for more unsolved mysteries is at an all-time high, thanks to season 1 of Serial re-examining the 1999 murder case of a Baltimore teenager and Netflix’s recent hit Making a Murderer, listeners are on a quest to find the next fascinating topic to take over our Gchat messages and dinner conservations. 2016/02 [Buzzfeed] 22 Podcasts In 2016. 2016/09 [Bello] Top 6 episodes from the Radiolab archives – Bello Collective – Medium. “Radiolab is a show about curiosity. 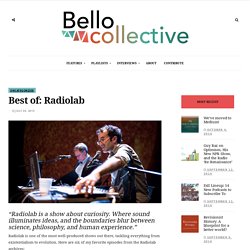 Where sound illuminates ideas, and the boundaries blur between science, philosophy, and human experience.” 2015/12 [Haffpo] 7 Full Podcast Seasons For Your Holiday Binge-Listening Pleasure. 2015/12 [guardian] The 10 best new podcasts of 2015 (that aren't Serial!) It’s been a big year for podcasts. 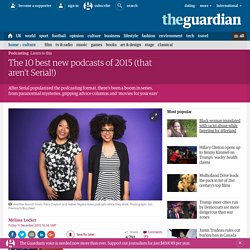 In the wake of Serial’s success, podcasting earned President Obama’s imprimatur of legitimacy when he stopped by Marc Maron’s garage for an episode of his WTF podcast. While some of the biggest names – This American Life, Radiolab, the Joe Rogan Experience – continue to dominate, new names are heading to their studios with microphones in hand to tell tales, report stories, talk about science, music and urban legends. 1. 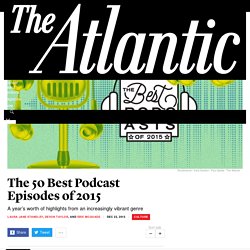 They range from products made by someone pressing record in their closet to million-dollar outfits with sterling sound engineering. Objectives span from shining a light on underheard voices to the audio equivalent of a selfie. But when Serial liberated the form, powerhouses like NPR and Gimlet Media began pumping real money into the medium, making space for shows with broad appeal and qualities people could judge empirically.

A list of the 50 best podcasts might have been nothing more than a desperate shuffle until now, but no more: At our website The Timbre, we’ve spent numerous hours every week poring through podcasts and making recommendations, which allows us to say confidently that these are the best of the best. The following works are ranked in order for their exemplary craftsmanship, entertainment value, and je ne sais quoi, all available for your binge-listening pleasure. 1. 2. 3. 4. 2015/11 [Telegragh] The best podcasts for true stories, books and fiction. 2015/05 [TED] Looking for a new podcast to try? 45 great picks from the TED staff. 2015/04 [Simply Rebekah] 14 Podcasts I'm Seriously Digging.

2015/04 7 Best Podcasts to Try. This past fall, along with the rest of the world, I got hooked on the podcast Serial. 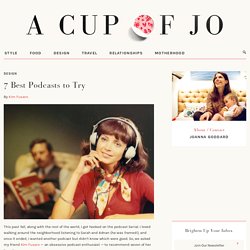 I loved walking around the neighborhood listening to Sarah and Adnan (he was framed!) , and once it ended, I wanted another podcast but didn’t know which were good. So, we asked my friend Kim Fusaro — an obsessive podcast enthusiast — to recommend seven of her favorites… My husband and I started listening to podcasts on long car rides together because each of us has a limited tolerance for the other’s taste in music. 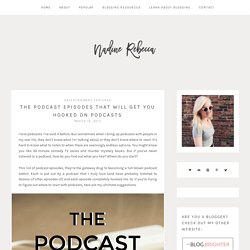 I’ve said it before. But sometimes when I bring up podcasts with people in my real life, they don’t know what I’m talking about or they don’t know where to start. It’s hard to know what to listen to when there are seemingly endless options. 2015/02 60 Podcasts You Should Check Out. Undoubtably, one of the most read topics on GettingSmart.com is podcasts. 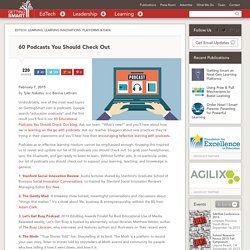 Google search “education podcasts” and the first result you’ll find is our 50 Educational Podcasts You Should Check Out blog. Ask our team, “What’s new?” And you’ll hear about how we’re learning on the go with podcasts. Ask our teacher bloggers about new practices they’re trying in their classrooms and you’ll hear how their encouraging reflective learning with podcasts. 2015/01 [EW] 20 podcasts you need to hear in 2015. “Did you listen to this week’s Serial?” That’s been the question on everyone’s lips the past three months.

The podcast, which reexamined the 1999 murder case of a Baltimore teenager, become morning Gchat convo—and launched a thousand think pieces declaring 2014 “The Golden Age of Podcasts.” While individual podcasts have previously broken through the cultural consciousness—like comedian Marc Maron’s WTF in 2009—the genre has generally been a niche interest since it hit iTunes in 2005. That year, there were only about 3,000 podcasts up and running. A decade later, that number has mushroomed to more than 285,000 podcasts, created in over 100 languages. 2015/01 [] The Ten Podcasts You Should Listen To. With the advent of television, logic and public opinion decreed that radio was dead. Why merely listen when you can listen with pictures? How wrong that was.

It may be the golden age of TV, with Netflix a non-negotiable fixture in most households, but it is surely a platinum age for radio and podcasts. The hysteria that surrounded last year's Serial was a very visible demonstration of this trend, but really exciting stuff has been going on in free spoken word content for a very long time, so we thought it was the moment to crown our particular favourites. From the old guard to innovative newcomers, through the thoughtful, funny, wise and sublime, here are the ten podcasts that inspire our minds, soothe our heartaches and take us inside the brains of some of the most interesting people on the planet.

2015/04 [] 9 Podcasts for Bloggers. Podcasting has recently become a wildly popular new form of media (Is it new when it’s actually just a radio show? Let’s call it throwback media). As a blogger, I crave content to make me better; to improve my writing, social media, strategy, and overall make my blog more awesome. Podcasts allow you to make the most of your commute, learn something while doing dishes, or be entertained while walking the dog. It makes me feel like I’m not wasting my time because I’m always learning. Here are some of the best podcasts I’ve found for bloggers and creative entrepreneurs. 1. Pat Flynn is the outstanding voice behind this massively popular podcast. Awesome Episode: How to Get More Traffic to Your Blog (with Corrbett Barr) or The Life of a Brand New Visitor 2. Ask Pat is also put out by Pat Flynn of Smart Passive Income. Awesome Episode: Episode 271 – I’ve Identified My Target Audience. 2014/11 [Mashable] 12 podcasts that will tell you a fantastic story.

It's official — the popular podcast Serial has surpassed 5 million downloads, making it the fastest podcast of all time to reach this milestone. This tells us that people really like murder mysteries, but also confirms something else we've known for a long time — listeners want to hear a good story. Unsolved murders are compelling, yes, but Serial is compelling because it puts the listener as close as one can possibly get to an event that happened in 1999.

Serial isn't the first podcast to figure out this equation — it's an offshoot of This American Life, the producers of which have been telling good stories since 1995 — and it isn't the only one doing it now, either. 2014/10 [Buzzfeed] 12 New Podcasts That Will Make You A Better Human. 2012/08 [] The 5 best podcasts to listen to on your commute. I have a long commute every day to my job in the suburbs. It takes about 45 minutes to an hour to get there and about an hour and 15 minutes to two hours to get home.