50 Things to Grill in Foil : Recipes and Cooking 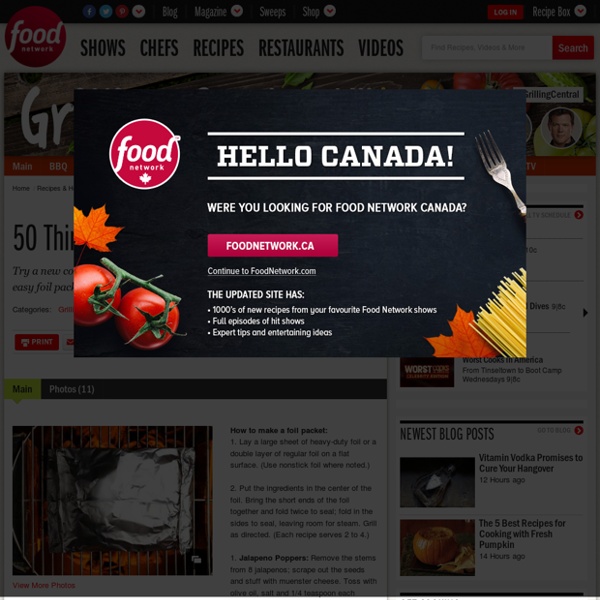 Baby Back Ribs My husband’s friend has been begging me to post this recipe so here it is: Finger lickin’ barbecued Baby Back Ribs! These beauties are my mom’s famous recipe for barbecued Baby Back Ribs. They are the BEST ribs I have every had! Tender, melt-in-your-mouth, fallin-off-the-bone ribs that are thickly caramelized with the perfect barbecue sauce thanks to my mom’s “triple dipping” process. K, so the kind of barbecue sauce is important. 8 Safe Dividend Oh, how times have changed since the fall of 2007. Back then, when the Dow and S&P 500 established new highs, media trucks located outside the NYSE were five deep, champagne corks were bursting all around, drinks were on the house at Harry's and price was no object at the Peter Luger Steakhouse. Flash forward to this month: the Dow is just coming off of new highs and the S&P 500 is closing in on the 1,700 level, but this time around, no media trucks. So what's the deal?

Creamy Caprese Pasta Sigh. It’s Monday. I know. You probably don’t have a smile on your face. Maybe you woke up 35 minutes late and couldn’t wash your hair. Dumped hot coffee on your new white shirt? How to Make Proper Barbecue Chicken There's a lot of misconception when it comes to "barbecue." The problem is the word itself. It's used as a synonym for grilling, refers to the grill itself, or to the meat being grilled; it also has a sauce named after it; and sometimes it's just the word for the party itself held outdoors in somebody's backyard. What, actually, is "barbecue"? American purists see things a little differently. To them, "barbecue" is a wonderful Southern tradition of slow-cooking with indirect heat and woodsmoke to transform cuts of meat, often inexpensive ones, into succulent, unbelievably delicious results.

Baked Chili & White Cheddar-Hatch Chile Cornbread Recipe We’re coming up on week 4 and salty, overseasoned Houston football “fans” have already thrown in the towel on the Texans’ season. Three times. And we’re 2-1. This city has had a long, jaded journey with professional football. My Kitchen Treasures: Chicken Skewers with Cardamom I am a huge fan of British chef Rick Stein, and love to watch his cooking shows. So it is not a mystery I have his cooking books. And ofcourse after watching his show, In search of the Perfect Curry I bought the book and I have made few dishes from the book which came out really good like this Sali Murgh which is a parsee chicken dish with apricot and fried potatoes.

45 Uses For Lemons That Will Blow Your Socks Off Most people are familiar with the traditional uses for lemons to soothe sore throats and add some citrus flavor to our foods. However the diversity of applications for lemons far exceeds general knowledge and once you read the following list, you'll likely want to stock at least a few lemons in your kitchen 24-7. 1. Freshen the Fridge Remove refrigerator odors with ease. Dab lemon juice on a cotton ball or sponge and leave it in the fridge for several hours.

100 Greatest Cooking Tips (of all time!) : Chefs 1. Remember, y'all, it’s all about the prep. Take away the stress by doing the prep the night or day before. The Comfort of Eggs in a Basket Eggs in a basket was the first meal I ever cooked. I was in 5th grade, and it was a Sunday morning at my best friend's house after a sleepover. We woke up hungry, and for some reason his parents weren't home. Shameless pleasures – Baked eggs w/ creamy goat cheese sauce Some things are just shameless pleasures. Not guilty, just shameless. Think of buying overly expensive shoes that you’ll use only three times a year (I never do that. I swear.) or watching three movies on the same sunday.

Roast Chicken with Lavender and Honey. Lavender, honey, lemon and thyme is an intoxicating combination. Their fragrance seems to take all drama out of the day, you can almost make believe you're in the warm sunny Mediterranean. Roast chicken is perhaps the most comforting of all home cooked meals, combine it with these ingredients and you have a very special offering. This recipe is an adaptation of one by Rachel Khoo of The Little Paris Kitchen. It's lovely, it makes you feel happy and turns the ordinary into extraordinary. Asia's 10 greatest street food cities Food is one of the most enjoyable things for travelers in Asia. But do you know where to find its best street dishes? Now you do, with this collection of best street food from 10 of the top food cities in Asia. While the nature of mobile street carts and movable market stalls means pinpointing every dish isn’t possible, the listings below indicate roads in each city that are more than likely to have someone selling. Start your Asian street food journey by clicking on a city on the left.