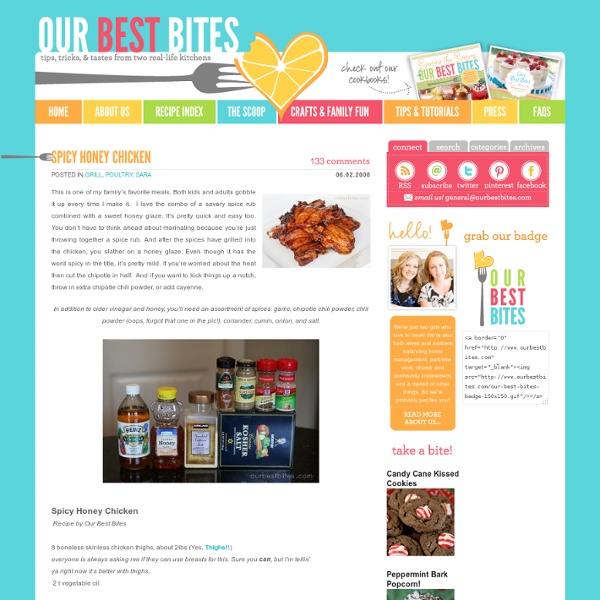 This is one of my family’s favorite meals. Both kids and adults gobble it up every time I make it. I love the combo of a savory spice rub combined with a sweet honey glaze. It’s pretty quick and easy too. You don’t have to think ahead about marinating because you’re just throwing together a spice rub. In addition to cider vinegar and honey, you’ll need an assortment of spices: garlic, chipotle chili powder, chili powder (oops, forgot that one in the pic!) Spicy Honey Chicken Recipe by Our Best Bites 8 boneless skinless chicken thighs, about 2lbs (Yes, Thighs!!) 2 t vegetable oil Rub 2 t granulated garlic 2 t chili powder 1/2 t onion powder 1/2 t coriander 1 t kosher salt 1 t cumin 1/2 t chipotle chili powder Glaze1/2 C Honey 1T Cider Vinegar Combine the rub spices in bowl and mix well. Use kitchen shears (or a pair of clean scissors) to trim off any excess fat from the chicken pieces.Pat dry. While chicken is cooking, warm honey in the microwave so it’s not so thick. Recipe by Our Best Bites

Dubstep Towards the end of the 2000s and into the early 2010s, the genre started to become more commercially successful in the UK, with more singles and remixes entering the music charts. Music journalists and critics also noticed a dubstep influence in several pop artists' work. Around this time, producers also began to fuse elements of the original dubstep sound with other influences, creating fusion genres including future garage, the slower and more experimental post-dubstep, and the harsher electro house and heavy metal influenced brostep, the latter of which greatly contributed to dubstep's rising mainstream popularity in the United States.[9] Characteristics Musical score of the above recording. The music website Allmusic has described Dubstep's overall sound as "tightly coiled productions with overwhelming bass lines and reverberant drum patterns, clipped samples, and occasional vocals Rhythm Dubstep rhythms are usually syncopated, and often shuffled or incorporating tuplets. Wobble bass

Take a Break from Take-out: Homemade Pot Stickers There are some things that just seem too daunting to make from scratch, and far easier to order in: potstickers, if you haven’t made them yourself, can be one of those things. The truth is, they’re far simpler to make from scratch than you might think. And if you have little fingers around that need occupying, they will most likely be happy to sit around the kitchen table for an hour and assemble little dumplings that you can then cook on the stovetop until golden-bottomed and crisp, or freeze in zip-lock bags to pop into simmering chicken stock with noodles for a quick wonton soup. (No need to thaw them first – just boil straight from frozen.) Northern Chinese guotie, (literally “pot stick”) are said to date back over four millennia, and were known by the ancient Chinese as being exceptionally good for the human soul. When filling your dumplings, make sure you squeeze any air bubbles out, lest they become floatation devices once they enter a pot of water.

Football & Fried Chicken - The Garden of Eden - The Garden of Eden I am a New England Patriots fan. There, I said it. Yes, I grew up in Colorado and yes, we live in Denver now. However, I truly became a football fan when I met Rob and that was in Boston... and the Patriots won three Super Bowl Championships while I lived in Boston! And to be fair, Denver lost three Super Bowls while I lived in Colorado. The cards were stacked against the Broncos years ago. Anyway. Only in the past year have I become comfortable with the idea of occasionally frying food. "Skillet" Fried Chicken Yield = 4 servingsFebruary 2012 Bon Appétit Ingredients2 tablespoons kosher salt, divided2 teaspoons plus 1 tablespoon freshly ground black pepper1 1/2 teaspoons paprika3/4 teaspoon cayenne pepper1/2 teaspoon garlic powder1/2 teaspoon onion powder1 3–4-lb. chicken (not kosher), cut into 10 pieces, backbone and wing tips removed1 cup buttermilk1 large egg3 cups all-purpose flour1 tablespoon cornstarchPeanut, canola or vegetable oil (for frying) Preparation

Baked Creamy Chicken Taquitos Make them with some sides for a fun dinner or for appetizers or snacks at a party. Whatever you make them for, this is totally “fun food”! And if you’re viewing this in a feed reader, come on over and check out our Daily Bite section that’s full of links to more fun food! Baked Creamy Chicken Taquitos 1/3 C (3 oz) cream cheese 1/4 C green salsa 1T fresh lime juice 1/2 t cumin 1 t chili powder 1/2 t onion powder 1/4 t granulated garlic, or garlic powder 3 T chopped cilantro 2 T sliced green onions 2 C shredded cooked chicken (for extra yumminess, use grilled taco chicken!) Work with a few tortillas at a time and heat in the microwave until they are soft enough to roll without cracking. Place 2-3 T of chicken mixture on the lower third of a tortilla, keeping it about 1/2 inch from the edges. Then roll it up as tight as you can. Place seam side down on the baking sheet. Place pan in oven and bake for 15-20 minutes or until crisp and the ends start to get golden brown.

Old Fashioned Waffles with Maple Butterscotch Syrup « Baker Bettie Well, it’s that time of year again. The time when we reflect on the past year and our accomplishments… or lack there of. It’s also the time of year when we get to start with a clean slate. I am no different than most. Baker Bettie 2012 Resolutions! #1: To simply keep blogging. #2: Try new recipes out of my new (well, new to me) cookbook. #3: Get really comfortable with this camera. Since I’m sure most of you have the same better eating resolutions as I do, why not go out with a bang on New Years Eve with this totally decadent breakfast or late night treat. Have a safe and happy New Year everyone! Old Fashioned Waffles with Maple Butterscotch Syrup Ingredients For the Waffles 2 cups cake flour 2 tsp baking powder 1/2 tsp kosher salt 3 eggs, seperated 1 1/4 cups milk 5 tbsp melted butter For the Maple Butterscotch Syrup 1 cup dark brown sugar 1/3 cup butter 1/3 cup heavy cream 1 tsp maple flavoring 1/2 cup water Instructions Sift the cake flour with the baking powder into a large bowl.

White Cheese Chicken Lasagna Recipe | Italian Recipes | Simple Recipes Be Sociable, Share! I always think of Lasagna as being Italian with a tomato sauce of some kind. When my son requested I make this I was kind of surprised at the type of ingredients it had in it. I wasn’t sure about the spinach so I cut the amount down to one 10 oz box; the recipe called for two. I also added fresh mushrooms just because it seemed like they would go good in this type of dish, and the tasted great. If you are looking for something different to bring to the table this White Cheese Chicken Lasagna Recipe with fit the bill. 1/2 cup butter 1 onion, chopped 3 cloves garlic, minced 1/2 cup all-purpose flour 1 teaspoon salt 2 cups chicken broth 1 1/2 cups milk 4 cups shredded mozzarella cheese, divided 1 cup grated parmesan cheese, divided 1 teaspoon dried basil 1 teaspoon dried oregano 1/2 teaspoon ground black pepper 9 lasagna noodles 2 cups ricotta cheese 2 cups cubed cooked chicken meat 1 (10 ounce) packages frozen chopped spinach thawed and drained 1 8 oz package fresh sliced mushrooms 1.

Spiced cinnamon sugar breakfast puffs « Five And Spice On the off chance that your holiday breakfast plan is not yet inscribed in stone; in case you aren’t already bound and determined to have a strata, or frittata, or sticky buns, or perhaps puffy pancakes or spoon bread; or maybe you’d like to just add some icing to your giant, decadent, multi-course holiday brunch cake; well then dear friends, may I venture a suggestion. I actually feel a bit ashamed that I’ve been holding this recipe from you for so long. It’s a recipe that may, in fact, deserve a little shouting from the rooftops. I didn’t know any of the stories when I first started baking the original version (this is a wholly different iteration, but we’ll get to that later), I just knew that I had the recipe copied down on an index card from my friend, and I had labeled it “breakfast puffs.” That right there is a flag of whatever color you flag really wonderful things with. I was lucky enough to grow up with a whole gaggle of best friends. Then I tried browning the butter.

Quick Chicken and Gravy — Our Life In The Kitchen It’s been a busy week, one where quick and easy is the only hope of cooking dinner instead of doing takeout. A bag of frozen chicken tenderloins pulled from the freezer, steamed rice and whatever veggie might be on hand and dinner’s ready in about 30 minutes. Chicken tenderloinsButterFlourSalt/PepperMarjoram and Thyme tonight, because I’m out of Sage.Chicken Broth Melt enough butter to generously cover the bottom of a large saute pan. Heat until it’s just barely turning brown. Add the chicken and season with salt, pepper and herbs. Once the chicken is starting to brown, turn it over. Cook just another minute or two, stirring a bit. Sprinkle with enough flour to coat the chicken well. Stir until chicken is well coated, butter is absorbed and flour just starts to cook. Add 3 cups of chicken broth. And then stirring in Better Than Bouilion paste. Simmer over low heat until the chicken is completely done and the gravy is thickened. Serve over rice or mashed potatoes.

English Pronunciation If you can pronounce correctly every word in this poem, you will be speaking English better than 90% of the native English speakers in the world. After trying the verses, a Frenchman said he’d prefer six months of hard labour to reading six lines aloud. Dearest creature in creation, Study English pronunciation. English Pronunciation by G. Source Breaking News: Fake News Special! Stylish Cuisine « Spinach and Chicken Tortilla Bake My husband usually likes my food, but occasionally I make something that isn’t his favorite. The great thing about my husband is that he gives his honest opinion about everything he tries. If he doesn’t like something, he’s very diplomatic, but he’s clear about his dislike. When I made this, I wasn’t sure what he was going to think about it because I’ve never made anything like it before. This recipe is spicy! This is a quick and easy dinner that will become a staple in our dinner rotation. Spinach and Chicken Tortilla Bake Recipe from Rachel Ray 1 tablespoon extra-virgin olive oil 4 chicken cutlets (about 1 pound) Salt and pepper 1 1/2 cups store-bought salsa verde 3/4 cup ricotta cheese 4 large (8″) flour tortillas 1/2 red onion, thinly sliced 3 cups baby spinach (about 1/4 pound) 2 cups shredded pepper jack cheesePreheat the oven to 450°. Print This Recipe