23 Books You Didn't Read In High School But Actually Should 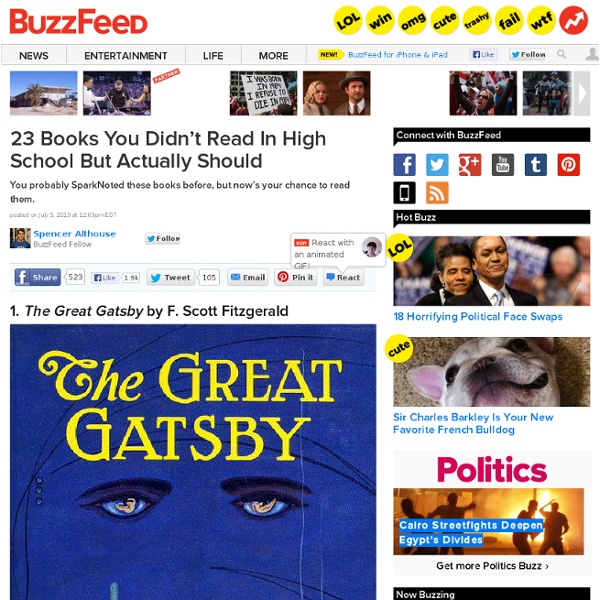 15 Things Kurt Vonnegut Said Better Than Anyone Else Ever Has Or Will 1. "I urge you to please notice when you are happy, and exclaim or murmur or think at some point, 'If this isn't nice, I don't know what is.'"The actual advice here is technically a quote from Kurt Vonnegut's "good uncle" Alex, but Vonnegut was nice enough to pass it on at speeches and in A Man Without A Country. 2. 3. 4. 5. 6. 7. 8. 9. 10. 11. 12. 13. 14. 15. The New Canon: 15 Modern Classics You Should Read Right Now | Qwiklit People may tell you that literature is dying, but plenty of authors are hard at work redefining the book world with groundbreaking and mind-bending works sure to be read and reread for quite some time. With so many books vying to be the next “Great American Novel”, this is merely a list of those who have earned their eminence and moved a generation some believed was devoid of literacy. Let us know what makes your list of modern classics in the comments. 1. Middlesex – Jeffrey Eugenides (2002) What is it about? Spanning three generations, this novel chronicles a hermaphrodite’s shift in gender identity in 1960′s Detroit. Why you should read it: While Oprah sang this novel’s praises by including it in her book club, Eugenides is a very skilled storyteller that understands the often-complicated relationship between family and sexuality. 2.The Corrections – Jonathan Franzen (2001) 3.The Fortress of Solitude – Jonathan Lethem (2003) 4. 5. What is is about? 6. 7. 8. 9. 10. 11. 12. 13. 14. 15.

2013′s 10 Best Works of Fiction So Far It may be hard to believe, but we’ve already made it halfway through 2013. And what a year for fiction it’s been! The first half of this year has been full of wonderfully strange short fiction, big important novels, and everything in between — and it’s only getting better (Donna Tartt! Margaret Atwood!) from here. After the jump, Flavorwire’s favorite fiction from the first half of 2013. Tenth of December, George Saunders George Saunders is a perennial Flavorwire favorite — and he’s also a favorite of pretty much anyone who’s serious about contemporary fiction.

Your mega summer reading list: 200 books recommended by TEDsters A look at the famous TED Bookstore at TED2013. Photo: Michael Brands Books can entertain, sucking you like a tornado into incredible new worlds. Books can teach, giving you a richer understanding of time periods, people and ideas you’ve never been exposed to. But books can do so much more. Lisa Bu: How books can open your mind In today’s talk, TED’s own Lisa Bu introduces us to the concept of “comparative reading,” the practice of reading books in pairs, to give deeper context and reveal new insights. Every year at TED, we set up a bookstore filled with books recommended by TEDsters of note. Jane Eyre by Charlotte Bronte. Cheaper by the Dozen by Frank B. The Good Earth by Pearl S. Benjamin Franklin: An American Life by Walter Isaacson. John Adams by David McCullough. Personal History by Katharine Graham. The Snowball: Warren Buffett and the Business of Life by Alice Schroeder. Lamb: The Gospel According to Biff, Christ’s Childhood Pal by Christopher Moore. Big Cats by Holiday Reinhorn.

A List of Books | 623 of the Best Books ever Written - StumbleUpon 30 Books I’m Glad I Read Before 30 - StumbleUpon In various ways, these 30 books convey some of the philosophy of how Angel and I live our lives. I honestly credit a fraction of who I am today to each title. Thus, they have indirectly influenced much of what I write about on this site. If you haven’t read these books yet, I highly recommend doing so. Stumbling on Happiness by Daniel Gilbert – Gilbert, a Harvard professor of psychology has studied happiness for decades, and he shares scientific findings that just might change the way you look at the world. What are your favorite books? Photo by: Katie Harris

10 New Must-Reads for July Though the book industry tends to slow down in the summer (heat makes it hard to turn the pages), July is still filled with great reads for your poolside or air-conditioner-side afternoons. Don’t be shy: grown ups can indulge in summer reading too. After the jump, ten books to get pumped about this month. The Classic Horror Stories, H.P. If you, like certain Flavorwire literary editors, have always wanted to get into H.P. From Zero to Well-Read in 100 Books Isn’t it strange that we have the term “well-read” but absolutely no one can come close to defining it? And isn’t also strange that other art forms don’t have equivalent terms for a vague sense of someone’s total experience of that form (well-seen for movies? well-heard for music? Absurd). Thinking about this recently sucked me into a little thought-experiment: say someone had never read any literature and wanted to be well-read. This hypothetical forces any given answerer to do two things: provide their personal definition of well-read and then give a list of books that might satisfy that definition. The following 100 books (of fiction, poetry, and drama) is an attempt to satisfy those competing requirements. As for the number of 100: in addition to being a nice, round number, it is also a number that, at a one-book-every-two-week pace this hypothetical reader could accomplish in just about four years–the standard length of an undergraduate program.

50 Books That Changed the World For centuries, books have been written in an attempt to share knowledge, inspiration, and discoveries. Sometimes those books make such an impact that they change the way the world thinks about things. The following books have done just that by providing readers an education in politics and government, literature, society, academic subjects such as science and math, and religion. Politics and Government These books represent some of the most important works that examine politics, economics, and philosophy that affect government. The Republic by Plato. Literature From creating characters and stories that have become ingrained in cultures around the world to upsetting censorship to inspiring the imagination of many, these works of literature have all touched the world in significant ways. The Canterbury Tales by Geoffrey Chaucer. Society These books have made an impact on society with views on racism, feminism, individualism, and scholarship. Diary of a Young Girl by Anne Frank. Religion

7 Better-Than-Beach-Reads About Famous Writers Though a great many literary novels have novelists as protagonists — e.g. Roth’s Nathan Zuckerman, or Chabon’s Grady Tripp, and that’s just for starters — much fewer explicitly take their inspiration from real-life writers. Or at least, they didn’t until recently, partly because of a certain stigma that has always attached to biography and biographers, the idea that they are people who sort through other people’s garbage in search of a crucial piece of mail. The public has generally disagreed on this point. Whether or not you think that’s just literary snobbery, of late even certain “serious” novelists have taken up the task of describing the lives of real writers. Abba Abba, by Anthony Burgess, tells the story of the last months of John Keats’ life, which he spent dying of consumption in Rome.

The best books of the ’00s | Books | Best of Anyone looking for trends in our selection of the best books of the ’00s might have a hard time finding them amid the wizards, 19th-century serial killers, dysfunctional families and such. Narrowing down our decisions was pretty tough, and the process required a number of back-and-forths about what was significant as well as beautifully executed, which book from a given author represented his or her best of the decade, and so on. So consider these alphabetically listed selections 30 of the many, many memorable books published this decade, and as always, let us know what we missed. Non-fiction: Devil In The White City (2003), Erik LarsonIt’s easy to imagine Devil In The White City as a historic true-crime novel, devoted to telling the chilling story of the serial killer H.H. Freakonomics (2005), Steven D. Nixonland (2008), Rick PerlsteinThe long 5 o’clock shadow over American politics gets his due in Perlstein’s exhaustively detailed tome on how the 37th president shaped his country.