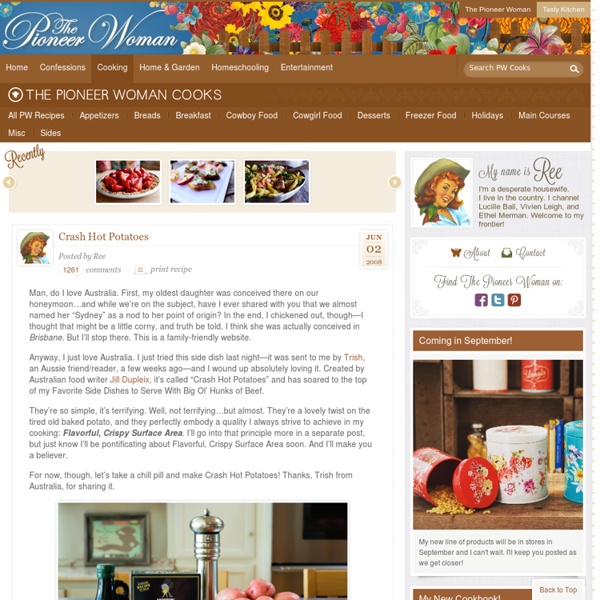 Man, do I love Australia. First, my oldest daughter was conceived there on our honeymoon…and while we’re on the subject, have I ever shared with you that we almost named her “Sydney” as a nod to her point of origin? In the end, I chickened out, though—I thought that might be a little corny, and truth be told, I think she was actually conceived in Brisbane. But I’ll stop there. This is a family-friendly website. Anyway, I just love Australia. They’re so simple, it’s terrifying. For now, though, let’s take a chill pill and make Crash Hot Potatoes! The Cast of Characters: New Potatoes (or other small, round potato), Olive Oil, Kosher Salt, Black Pepper, and whatever herb you like. Begin by bringing a pot of salted water to a boil. Add in as many potatoes as you wish to make, and cook them until they’re fork-tender. Oh! Next, generously drizzle olive oil on a sheet pan. This will mean the difference between the potatoes sticking and not sticking, so don’t be shy here. Or something. That’s it!

Butternut squash and cranberry gratin - Running to the Kitchen This butternut squash and cranberry gratin is creamy, cheesy and perfectly crunchy on top. You’d never guess it’s dairy free! When it comes to Thanksgiving, I’m pretty sure my family might be the only one in country that couldn’t care less if the typical creamy mashed white potatoes weren’t on the table. Crispy Skillet Home Fries with Sweet Onion Ingredients: 1 1/2 pounds Yukon Gold potatoes, cut into 1/2-inch to 3/4-inch cubes1 large sweet onion, rough chopped2 tsp olive oil 2 tsp butter1 tsp smoked paprika How To Make Nacho Cheese Sauce One more fake food comes off my list of guilty pleasures. I’m a sucker for nachos with cheese sauce. I’ve had the “cheese” sauce in jars and in cans. Have you ever read the ingredients in those things?

Chicken and biscuits Here's another delicious winter all in one meal, that I could maybe eat every day. Or at least every day for a week, then maybe not for a while. Chicken and Biscuits (or dumplings) I'm not sure if these are biscuits or dumplings, on one hand I used a biscuit dough recipe, on the other the dough is dropped and cooked in the liquid gravy, which is what dumplings are. Either way, oh maaaaaan. Chicken recipe based off a recipe from the Joy of Cooking. Cheddar Bacon Potato Packets If I had to choose a favorite vegetable, it would have to be the potato. They are just so versatile (and filling!). I just love to make so much with taters. The possibilities are endless and thankfully I married a tater-lovin' man too.

Falafel - Traditional Recipe for Chickpea Falafel In Israel, falafel stands are as numerous and plentiful as McDonalds here in the U.S. Falafel is the unofficial “national snack of Israel.” If only we had half as many falafel stands in the U.S. as we do McDonalds, I’d be a very happy girl. It’s a delicious form of fast food that is much lighter and better for your heart than burgers and fries. Falafel is a traditionally Arab food that has been adopted by Israeli Jews. Twice Baked Smashed Potatoes This dish is always gets great reviews because almost everyone loves a baked potato. I love it, not just because it's tasty, but because it can be prepared ahead of time when I'm entertaining. Make ahead dishes make life so much easier when you're busy with other things. Prepare the dish the night before, cover with plastic wrap and refrigerate. Before baking, bring the potatoes to room temperature and sprinkle the cheese on top.

Crusty Bread Recipe There’s just something about the smell of fresh baked crusty bread that makes you feel at home. If you like fresh baked bread but don’t like all the elbow grease that goes into it then keep reading. Bread makers were all the rage a few years ago and took a lot of the work out of fresh homemade bread.