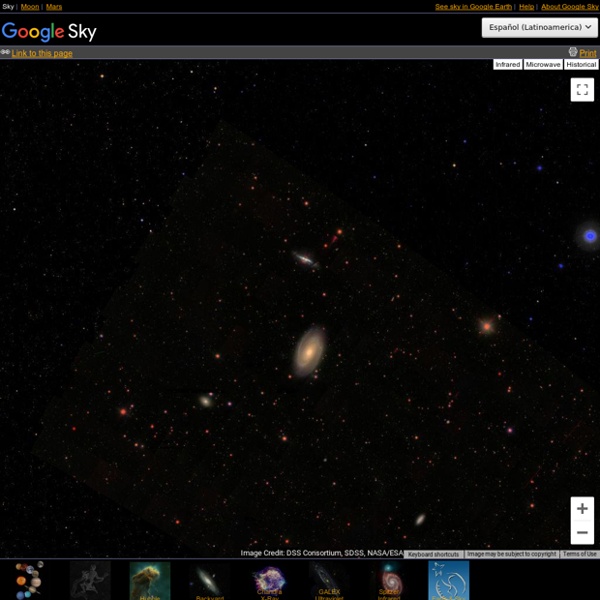 Image may be subject to copyright Terms of Use Image Credit: DSS Consortium, SDSS, NASA/ESA

Teaching astronomy and space videos The resources are built around a series of Teachers TV programmes, aim to support the teaching of astronomy and space to 11-16 year olds. Produced with generous funding from the Science and Technology Facilities Council, on behalf of the Institute of Physics and Teachers TV, they are now available to watch through a number of websites, including www.schoolsworld.tv/series/teaching-astronomy-and-space. Within the programmes there are sections to use with students, where astronomers talk about their work in an inspiring and engaging way, as well as guidance and advice on setting up and managing practical activities with students. The activities are supported by full teaching notes. The different sections of the programmes are available to download separately below. Astronomy and space videos

National Inventors Hall of Fame Museum , Alexandria, United States We are the National Inventors Hall of Fame: the driving force behind lifelong innovation, paying forward America’s rich history of invention and securing our country’s competitive advantage for the future. We believe our role is to not only honor the individuals whose inventions have made the world a better place, but also to ensure American ingenuity continues to thrive in the hands of coming generations. This belief drives our mission: to recognize inventors and invention, celebrate our country’s rich, innovative history, inspire creativity, and advance the spirit of innovation and entrepreneurship. True to our mission, we don’t just talk the innovation talk, we walk the innovation walk by reinventing what a Hall of Fame, a museum, or even what a monument can be and do. Instead of being defined by the past, we invest in the future.

Teachers - Instructables "Don't stop what you're doing!!" - J. Ward,Homeschooler Exploring Planets in the Classroom: Hands-on science activities Exploring Planets in the Classroom was a long-running summer workshop in Planetary Geosciences offered at the University of Hawai‘i at Manoa for the state's K-12 educators and librarians under the direction of Dr. G. Jeffrey Taylor. Hands-on activities in this course were developed and/or tested by the Hawai‘i Space Grant Consortium in cooperation with educators statewide. In 1996 the workshop transformed into this website to assist educators and resource specialists around the globe to find hands-on activities that match science standards in elementary, middle, high school, and college classrooms.

Todas las Simulaciones - Simulaciones PhET Ir directo al contenido principal Ingresar Forgot password? ¿No tienes una cuenta? Living on the International Space Station - Science (5,10) - ABC Splash - Overview What would it be like to live on a space station? In this clip you'll see footage of astronauts on the International Space Station and discover what their daily life is like. Make Kids' Books Online For Free! How do planets form? An interview with a planetary scientist - skyatnightmagazine Dr Farzana Meru is an assistant professor and Royal Society Dorothy Hodgkin Fellow at the University of Warwick. Her research is on the formation of planets, and she uses a variety of techniques to investigate how they grow. BBC Sky at Night Magazine spoke to Dr Meru to find out more about planet formation.

Temas de Tecnologia Aboriginal astronomers: world's oldest? THERE’S GROWING EVIDENCE THAT Australia’s indigenous people could be the world’s oldest astronomers, according to astrophysicist Ray Norris, who is based at CSIRO's Australia Telescope National Facility in Sydney. He has researched Aboriginal stories about the night sky for five years and says one of the earliest European records of indigenous astronomy was made by William Stanbridge, an Englishman who emigrated to Australia in 1841 and ran sheep at Lake Tyrrell, in northern Victoria. Stanbridge befriended members of the local Boorong people. They showed him how they viewed the constellations and Stanbridge published their stories in his 1857 essay On the Astronomy and Mythology of the Aborigines of Victoria. Stanbridge’s writings recorded the Boorong’s holistic use of astronomy and explained how they integrated their understanding of the stars with knowledge of the land and seasons, Ray says.

Dreaming of the sky Just as ecologists are increasing their understanding of the Australian environment through studying Aboriginal stories and talking to tribal Elders, so astronomers are beginning to appreciate Indigenous knowledge of the sky. When Macquarie University PhD student Duane Hamacher encountered Aboriginal Dreamtime myths involving fiery stars falling to Earth, he decided to see if he could track where these objects had landed. Following several leads, Duane surveyed remote areas of Australia using Google Earth—and discovered a meteor impact site at Palm Valley, about 130 kilometres southwest of Alice Springs.

Aboriginal Astronomy The Emu in the Sky The photograph above shows the aboriginal "emu-in-the-sky" constellation in the sky. It won its creator, Barnaby Norris, third prize in the prestigious 2007 "Eureka" awards. To see the "constellation", look at the dark dust-clouds, not the stars! Below it is the emu engraving at the Elvina engraving site, in Kuring-Gai Chase National Park, near Sydney The constellation is positioned above the engraving as it appears in real life in Autumn. Many Aboriginal groups have stories about the “Coalsack” – the famous dark cloud next to the Southern Cross.

10 Things That Happen To An Exposed Human In Space Space We’ve all seen it in sci-fi movies: Someone gets sucked out of a spaceship and thrown into the emptiness of space. Not surprisingly, many movies get it wrong.