Study Buddhism. Understanding Buddhist Scriptures. Is there a Buddhist Bible? Not exactly. Buddhism has a vast number of scriptures, but few texts are accepted as authentic and authoritative by every school of Buddhism. There is one other reason that there is no Buddhist Bible. Many religions consider their scriptures to be the revealed word of God or gods. In Buddhism, however, it is understood that the scriptures are teachings of the historical Buddha - who was not a god - or other enlightened masters. The teachings in Buddhist scriptures are directions for practice, or how to realize enlightenment for oneself. Types of Buddhist Scripture Many scriptures are called "sutras" in Sanskrit or "sutta" in Pali. Sutras come in many sizes. Not all scriptures are sutras. Theravada and Mahayana Canons. Sito Ufficiale Istituto Lama Tzong Khapa. Comunità Dzogchen Merigar West. Centro Tenzin - Studi Tibetani. Istituto Samantabhadra.

Dharma. Key concept in Indian philosophy and Eastern religions, with multiple meanings Dharma (;[7] Sanskrit: धर्म, romanized: dharma, pronounced [dʱɐrmɐ] ( listen) (Pali: dhamma) (Tamil: aṟam)) is a key concept with multiple meanings in Indian religions, such as Hinduism, Buddhism, Jainism, Sikhism and others.[8] Although there is no direct single-word translation for dharma in Western languages,[9] it's commonly translated as “righteousness”, “merit” or “religious and moral duties” governing individual conduct.[11] In Hinduism, dharma is one of the four components of the Puruṣārtha, the aims of life, and signifies behaviours that are considered to be in accord with Ṛta, the order that makes life and universe possible.[12][note 1] It includes duties, rights, laws, conduct, virtues and "right way of living".[13] In Sikhism, dharma means the path of righteousness and proper religious practice And one's own moral duties toward God.[16] Etymology[edit] 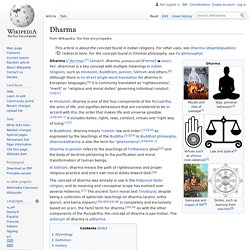 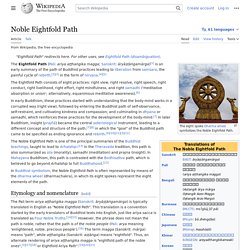 Etymology and nomenclature[edit] The Pali term ariya aṭṭhaṅgika magga (Sanskrit: āryāṣṭāṅgamārga) is typically translated in English as "Noble Eightfold Path". This translation is a convention started by the early translators of Buddhist texts into English, just like ariya sacca is translated as Four Noble Truths. Arya (Buddhism) The term is used in the following contexts: The Four Noble Truths are called the catvāry ārya satyāni (Sanskrit) or cattāri ariya saccāni (Pali).The Noble Eightfold Path is called the ārya mārga (Sanskrit, also āryāṣṭāṅgikamārga) or ariya magga (Pāli).Buddha's Dharma and Vinaya are the ariyassa dhammavinayo.In Buddhist texts, the āryas are those who have the Buddhist śīla (Pāli sīla, meaning "virtue") and follow the Buddhist path.Buddhists who have attained one of the four levels of awakening (stream-entry, once-returner, non-returner, arahant) are themselves called ariya puggalas (Arya persons). 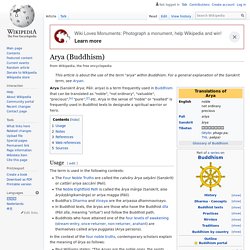 In the context of the four noble truths, contemporary scholars explain the meaning of ārya as follows: The word "noble," or ariya, is used by the Buddha to designate a particular type of person, the type of person which it is the aim of his teaching to create. In the discourses the Buddha classifies human beings into two broad categories. Portail:Bouddhisme. This is about Buddhism. Bouddhisme Facile. Buddhism. Buddhism and Buddhist schools. 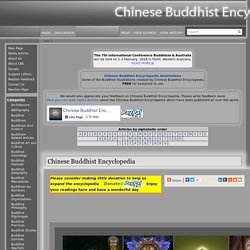 The PNC was founded at the University of California, Berkeley and it encourages scholars, academic institutions, and universities to collaborate and exchange their academic resources and research expertise. It is really wonderful, that Western Australia which is usually known for the mining boom, was represented by two people who deal with the academic aspect of Buddhism on international level. Until today, Western Australian universities do not have Buddhist studies at all. Prof. Emeritus Lewis Lancaster from UC Berkeley was the key speaker of the first International Conference Buddhism & Australia was very satisfied with the conference, academic presentations and organizational work. Two research papers on Buddhist history was presented at the PNC 2016 in Los Angeles this year. Buddhadharma. Dharma. Buddhism Archive. Buddhachannel : le portail du bouddhisme, de la santé et du bien-être. Himalayan Art Resources.

TIBETAN BUDDHIST GODS, BODHISATTVAS AND BUDDHAS. Maitreya The pantheon of gods in Tibetan Buddhism is derived mainly from Hinduism, Indian Buddhism and the Bon religion. 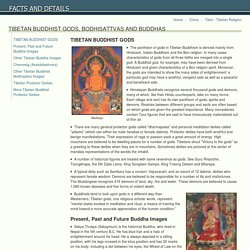 In many cases characteristics of gods from all three faiths are merged into a single god. A Buddhist god, for example, may have been derived from Hinduism and given characteristics of a Bon religion spirit. Moreover, the gods are intended to show the many sides of enlightenment: a particular god may have a wrathful, vengeful side as well as a peaceful and beneficent side. Dharma Haven: A Harbor from the Storms of Panic and Confusion. Ganachakra. Buddhism. Buddhism. Gandharan Art and Buddhism (Complete) Les Archives Berzin – Les Archives bouddhistes du Dr. Alexander Berzin – Page d'accueil. The Next Berzin Archives. 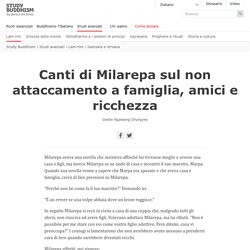 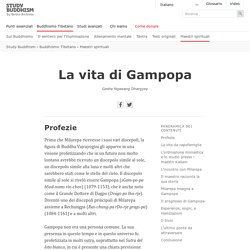 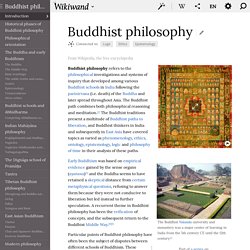 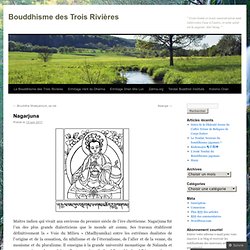 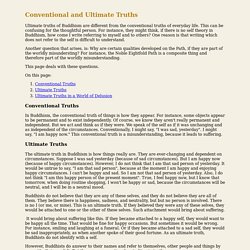 This can be confusing for the thoughtful person. For instance, they might think, if there is no self theory in Buddhism, how come I write referring to myself and to others? One reason is that writing which does not refer to the self is difficult to understand. The Two Truths of Buddhism and The Emptiness of Emptiness. There are two truths in Buddhism, conventional and ultimate truth. This penetrating insight dates back to the original Buddha. Understanding the two truths and the relationship between them is vital in seeing through the illusion of inherent existence and realizing emptiness or Śūnyatā.~ Nagarjuna’s philosophy of the Middle Way or Mahyamaka school of Buddhism shows how the two truths are different and yet despite this difference are critically the same.

Neuroscience has been interested in Buddhism since the late 1980s, when the Mind and Life Institute was created by HH Dalai Lama and a team of scientists. The science that came out of those first studies gave validation to what monks have known for years — if you train your mind, you can change your brain. As neuroscience has begun studying the mind, they have looked to those who have mastered the mind. While Buddha didn’t teach anatta to lay people, thinking it might be too confusing, the concept is centered on the idea that there is no consistent self. [W]hen there is no consistent self, it means that we don’t have to take everything so personally. It is useful to look at a video of yourself from the past, or read something you wrote years ago. Rebirth and Consciousness.

Was the Buddha an Atheist? "The Buddha was an atheist. " Writer Allan Badiner made this bald pronouncement in the midst of a conversation that spanned the wee hours of a cloudless Burning Man night. Sitting in a vast tent where, during the day, scores of partygoers had washed off their dust and grime in a plexiglass chamber, we discussed prevailing notions of a Buddhist godhead and, conversely, our mutual embrace of the religion in its secular form. I was most intrigued, though, by Badiner’s description of the Buddha as an atheist. I asked for sources. Allan’s first response: I would need time to do it, but there are passages from the Tripitaka that strongly indicate that the Buddha denied the existence of a creator god.

I responded with enthusiasm and persistence: "I like nontheist—thanks—but do send me the citation when you can. " Buddhist Inspirations & News » Are Manifestations & Mediums Of Bodhisattvas & Buddhas Around? We should respect all beings, even helpful humans, gods and ghosts. However, Buddhists only take refuge in the perfect Buddhas, Dharma and Aryasangha.

An interestingly phrased question arose recently – ‘Why do mediums not get any Buddha to answer their devotees’ questions?’ Buddhist Teachings on Fear and Fearlessness. Buddhist Monsters – Inside and Out. While there is no shortage of serene and benevolent buddhas, Buddhist folklore abounds with hell-raising zombies, vampires, ghouls, and ogres. But they’re not just the stuff of myth and legends. Depending on whom you ask, these ferocious monsters are thought to be as real as you or me, or serve as potent symbols of our less enlightened sides. Since reincarnation sits at the heart of Buddhist cosmology, we are never far from becoming the monsters we fear. In tantric traditions, practitioners are taught that subjugating outer demons is really about taming inner ones. Greco-Buddhism. Greco-Buddhism, sometimes spelled Graeco-Buddhism, refers to the cultural syncretism between Hellenistic culture and Buddhism, which developed between the 4th century BCE and the 5th century CE in the Indian subcontinent, in modern day Afghanistan, India, and Pakistan.

The most important book of the school is the Vijnaptimatrata-siddhi (Chin., Cheng-wei-shih-lun, proof of Nothing-but-Cognition) by Hsuan-tsang, a compendious work in which the teaching of the school is presented in detail. The special characteristics of this school are its emphasis on meditation and a broadly psychological analysis. Digital Library - Buddhist Digital Resource Center. ‎The Tibetan Book of the Dead - Evens Wentz. Buddhist Texts and Teachings. Sacred Texts: Buddhism. Buddhist Wisdom, Meditation, and Practices for Daily Life. Jayarava's Raves. Ad orientem vergere. Welcome! — International Dzogchen Community Webcast. Archivio testi. Dzogchen in Tibet: risveglio, illuminazione e corpo di luce.