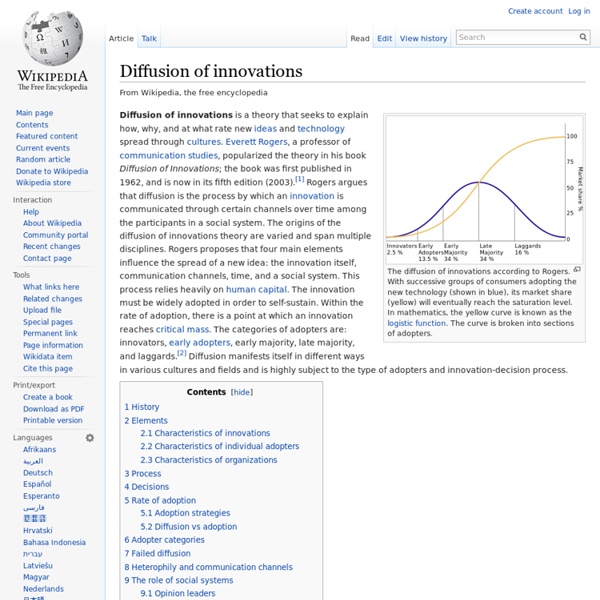 Diffusion of Innovations, 5th Edition (9780743222099): Everett M. Rogers, Everett Rogers: Gateway CTLT Communities of Practice From creation myth to the reality of innovation today On the surface, Malcolm Gladwell’s latest article for The New Yorker, “Creation Myth: Xerox PARC, Apple, and the truth about innovation“, is a story about the mouse and how inventions travel – and evolve – across time and place. But examined more deeply, the article is really about the factors that determine whether you end up with an invention or an innovation. Simply put: “invention” is the manifestation of an idea or creation of something new. It doesn’t become an “innovation” until it’s applied successfully in practice – i.e., it reaches the market and impacts people’s lives. The story of PARC – and for that matter, any other innovative company – is indeed a mix of hopeful inventions, world-changing innovations, and missed opportunities, as Gladwell observes. On the challenges of invention and innovation 1. 2. 3. 4. 5. A note on the popular story of the mouse Speaking of the “expert mind”… There’s a nuance that’s often forgotten in popular retellings of the story of the mouse.

UIIN Good Practices Just before the end of the year 2013, UIIN published the first edition of its Good Practice Series. The second edition followed in 2014. The case studies are developed to support, develop and strengthen the interaction between Higher Education Institutions (HEIs) and business. The objective of the series is to highlight a wide variety of cases in different settings. All case studies are presented in the same structure, starting with General Information, followed by the Case Study Profile, Implementation & Funding, Outcomes & Impact, Lessons Learned and Further Information. Through this publication UIIN strives to support and stimulate the development of university-industry interaction, entrepreneurial universities and collaborative innovation.

How any business can innovate like Apple by Josh Bernoff Yeah, right. Innovate like Apple. You can do it. One of the smartest guys I know is James McQuivey, who works with me at Forrester Research. It's very human to think about the linear evolution that created a product like the iPad. It's also wrong. In fact, breakthrough new products come about from a combination of forces. You can do this too. Exploit the adjacent possible. It's not that easy, you say. Photo by Grant Robertson via Flickr. Bazar - Dinner: Monday, 8 December Please, Can We All Just Stop "Innovating"? - Bill Taylor by Bill Taylor | 11:33 AM May 30, 2012 There’s something about the culture of business that tends toward excess — in financial markets, to be sure, but also in the “market” for new ideas and management techniques. The dynamic is always the same, whether the idea in question is reengineering, six-sigma quality, or lean production systems: A genuinely original strategy is born in one company or industry, consultants discover the practice and turn it into a marketable commodity, executives in all sorts of other companies race to “buy” the product — and then they wonder why the technique didn’t work nearly as well in their organization as it did in the place that created it in the first place. I fear that very dynamic is unfolding today with respect to a piece of language and a leadership aspiration that has become the Holy Grail for business thinkers like me. That piece of language, that aspiration, is innovation. Ouch, that’s gonna leave a mark!

Proust The policymaker’s dilemma Here is an exchange with Robert van Apeldoorn, Journalist with Trends Tendances Magazine in Belgium. (www.trends.be/fr). The exchange took place in early September via e-mail. Robert: -Information and Communications Technology (ICT) is considered in Europe as a way to push growth, and is a target of national and EU policies (digital growth,etc), but the result seems to be a failure: the European computer industry (hardware) is almost dead (ICL, Siemens computers bought by Fujitsu, Olivetti almost out of computer business, Nixdorf dead) since the 90’, and the telco industry seems to be in crisis. My answer: You are correct in this observation. Almost all growth has come from companies that entered the space. It’s understandable given the need to justify spending other people’s money. This quickly becomes a lengthy discussion, but fundamentally the innovation process is chaotic. thank you very much for these interesting answer.