Bombshell: Syria's 'chemical weapons' turn out to be sodium fluoride used in the U.S. water supply and sold at Wal-Mart 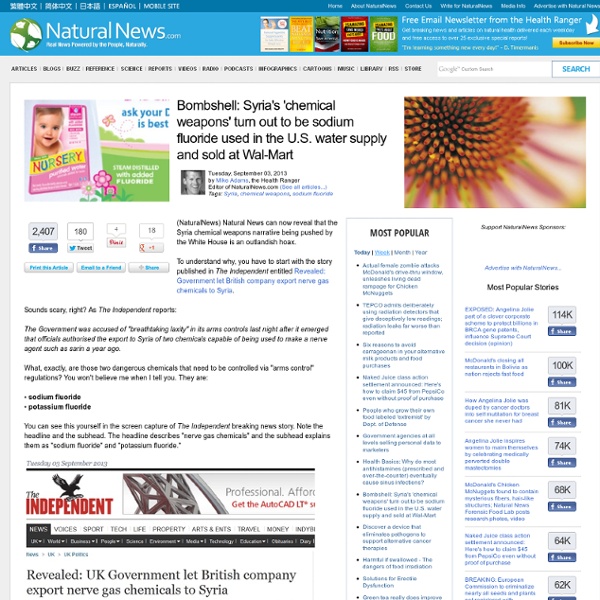 (NaturalNews) Natural News can now reveal that the Syria chemical weapons narrative being pushed by the White House is an outlandish hoax. To understand why, you have to start with the story published in The Independent entitled Revealed: Government let British company export nerve gas chemicals to Syria. Sounds scary, right? As The Independent reports: The Government was accused of "breathtaking laxity" in its arms controls last night after it emerged that officials authorised the export to Syria of two chemicals capable of being used to make a nerve agent such as sarin a year ago. What, exactly, are those two dangerous chemicals that need to be controlled via "arms control" regulations? • sodium fluoride• potassium fluoride You can see this yourself in the screen capture of The Independent breaking news story. click here to watch my video explaining all this at TV.naturalnews.com. According to U.S. By implication, then, John Kerry is now calling for the UN to bomb the USA.

Military Doesn’t Want To Fight For Jihadists In Syria Why is the Obama administration so determined to have the U.S. military help al-Qaeda win the civil war in Syria? Why are we being told that the U.S. has "no choice" but to help rabid jihadist terrorists that are slaughtering entire Christian villages, brutally raping Christian women and joyfully beheading Christian prisoners? If you are a Christian, you should not want anything to do with these genocidal lunatics. Jabhat al-Nusra is a radical Sunni terror organization affiliated with al-Qaeda that is leading the fight against the Assad regime. If they win, life will be absolute hell for the approximately two million Christians in Syria and other religious minorities. According to Wikipedia, Jabhat al-Nusra intends "to create a Pan-Islamic state under sharia law and aims to reinstate the Islamic Caliphate." Not that we should be supporting Assad either. The U.S. military should only be put into action when there is a compelling national interest at stake. Are we insane? Of course not.

NIST FOIA: Release #25 -- 42A0108 - G25D18, Video #2 (Collapse of WTC 2 & 1) WCBS Raw Tape, NIST FOIA release 25, 42A0116 - G25D26 INSANITY: Senate Crafts Resolution Authorizing Military Force In Syria, Gives Obama 90-Days To Take Action… (Boots on Ground Allowed!) (POLITICO) -- A new use-of-force resolution for Syria sets a 60-day deadline, with one 30-day extension possible, for President Barack Obama to launch military strikes against the regime of Syria President Bashar Assad — and it will also bar the involvement of U.S. ground forces in Syria. The revised resolution was crafted by Sens. Robert Menendez (D-N.J.) and Bob Corker (R-Tenn.), the chairman and ranking member of the Foreign Relations Committee, following several days of negotiations. Aides to Senate Majority Leader Harry Reid (D-Nev.) and Minority Leader Mitch McConnell (R-Ky.) were also involved in the discussions over the revised resolution. Menendez and Corker both support Obama’s call for “limited, proportional” attacks on the Assad regime over its alleged use of chemical weapons against Syrian civilians. Over the last two days, Corker had been insisting on a 30-day deadline for Obama to order any military action against Syria, but Democrats objected to that requirement.

» Exclusive: High Level Source Confirms Secret US Nuclear Warhead Transfer Alex Jones Anthony Gucciardi & Alex Jones Infowars.com September 3, 2013 A high level source inside the military has now confirmed to us that Dyess Air Force base is actively moving nuclear warheads to the East Coast of the United States in a secret transfer that has no paper trail. According to the high level military source, who has a strong record of continually being proven correct in deep military activity, the Dyess Air Force Commander authorized unknown parties to transfer the nuclear warheads to an unknown location that has been reported to be South Carolina, where the warheads will then be picked up and potentially utilized. This is of particular interest not only due to the fact that the Syrian situation has escalated to the point of a very realistic hot war scenario, but due to the fact that Dyess has repeatedly denied the existence of nuclear warheads inside the base. The brief report from the top level military source, which was written in a rush to get the information out, reads:

A Bunch Of Young Geniuses Just Made A Corrupt Corporation Freak Out Big Time. Time For Round Two. When you've got giant energy companies this scared, you must be doing something right. At 3:38, I snorted. Just sayin'. And at 4:43, he explains brilliantly what's in it for you. For more information on how you can help this amazing nonprofit win, you could go here. UPDATE (9/3/2013, 12 p.m. UPDATE (9/3/2013, 9 p.m. UPDATE (9/17/2013, 10 p.m. Apparently you guys are helping. Rand Paul Tries to Have Abby Martin Fired From RT For Daring To Ask Him Questions

Two new polls: Heavy public opposition to U.S. strikes in Syria posted at 6:01 pm on September 3, 2013 by Allahpundit We’ll start with Pew. The good news for O? But moving it from 29/48 opposition to majority support? Just 29% of Democrats favor conducting airstrikes against Syria while 48% are opposed. There are actually more Democrats opposed to a strike than there are Republicans even though Dems are way more likely to say that Obama has “explained clearly” why the U.S. should launch airstrikes than GOPers or indies are. Since #Obama still refuses to tell us the whole truth about #Benghazi, why do GOP leaders trust Obama to be truthful about #Syria? That’s a foreign-policy version of the argument border hawks have been using against immigration. Meanwhile, at ABC/WaPo: Nearly six in 10 oppose missile strikes in light of the U.S. government’s determination that Syria used chemical weapons against its own people. Tags: airstrikes, assad, chemical weapons, gas, Iran, obama, pew, poll, Russia, Syria Related Posts:

Obama Reduces Pay Hike for U.S. Troops, Still Fighting in Afghanistan (CNSNews.com) – As promised in his Fiscal Year 2014 budget, President Obama has just informed Congress that he will cap next year’s pay raise for U.S. military personnel at 1 percent, instead of the 1.8 percent raise set by the formula Congress established. The announcement came on Friday afternoon, at the start of the long Labor Day weekend, in a letter to Congress. “I am strongly committed to supporting our uniformed service members, who have made such great contributions to our Nation over the past decade of war,” President Obama wrote to congressional leaders. “As our country continues to recover from serious economic conditions affecting the general welfare, however, we must maintain efforts to keep our Nation on a sustainable fiscal course. This effort requires tough choices, especially in light of budget constraints faced by Federal agencies.” And based on that statutory formula, military personnel should be getting a 1.8 percent pay raise beginning in January 2014. Like this:

Flashback – Assad in 2010: ‘I Trust Senator Kerry…I Met Him Five Times’ Excerpted from Newsbusters: As NewsBusters reported Monday, Secretary of State John Kerry when he was still a Senator dined with Syrian President Bashar al-Assad in 2009. In a 2010 interview, Assad said, “I trust Senator Kerry, and I think he’s genuine…I met him five times.” BASHAR AL-ASSAD: I trust Senator Kerry, to start with this word. I trust Senator Kerry, and I think he’s genuine. And I met him five times. It’s not the first meeting or the second meeting. The following year, Kerry again met Assad as reported by the New York Times on April 1, 2010: After his meeting with Mr. Readers are also reminded what Kerry said about Assad in 2011: On March 16, 2011—the day after the first mass demonstration against the regime—John Kerry said Assad was a man of his word who had been “very generous with me.” This is the same man Kerry compared to Adolf Hitler and Saddam Hussein on Sunday’s Meet the Press. Will the Obama and Kerry-loving media report any of this? Stay tuned. Like this: Like Loading...