Official Minecraft Wiki – The ultimate resource for all things Minecraft 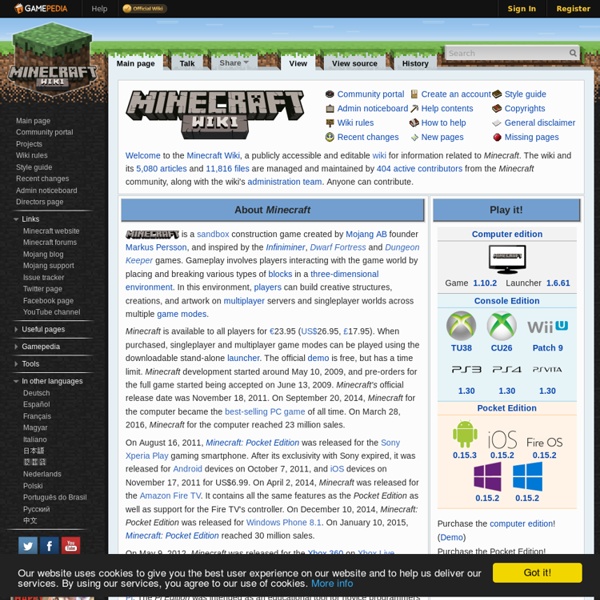 is a sandbox construction game created by Mojang AB founder Markus Persson, and inspired by the Infiniminer, Dwarf Fortress and Dungeon Keeper games. Gameplay involves players interacting with the game world by placing and breaking various types of blocks in a three-dimensional environment. In this environment, players can build creative structures, creations, and artwork on multiplayer servers and singleplayer worlds across multiple game modes. Minecraft is available to all players for €19.95 (US$26.95, £17.95). When purchased, singleplayer and multiplayer game modes can be played using a web browser or the downloadable stand-alone launcher. Minecraft Classic is available to play for free.

Ideas for Using Minecraft in the Classroom As is the nature of sandbox games, players can roam free, choosing objectives as they go. Because Minecraft has such open possibilities and potential, the teacher can choose how he or she wants to use it. Just as the student has the ability to be creative, the teacher has the same. That can be overwhelming, but luckily, there is a tool for using Minecraft created by teachers for teachers. MinecraftEdu provides a custom mod, basically a customized modification of the game, that helps facilitate organization and focus for teachers to use Minecraft effectively.

Adventure Time Craft! Minecraft Texture Pack Original Adventure Time Craft thread *UPDATE - As promised, the long awaited Adventure Time Craft for 1.7.2! Now if you'll excuse me, I gotta clean out my oatmeal covered microwave. Crafting Crafting is the method by which many blocks, tools, and materials are made in Minecraft. In order to craft something, players must move items from their inventory to a crafting grid. A 2×2 crafting grid can be accessed from the player's inventory. Data values These data values refer to the different types of blocks and items. They are used in many, many places in Minecraft. Block IDs are used to define blocks placed in the world and inventory items (including items in chests and items dropped in the world). Item IDs are only valid for items.

Minecraft Wiki.en From its creation, Minecraft was developed almost exclusively by Notch until Jens "Jeb" Bergensten started working with him, and has since become head of its development. It features music by Daniel "C418" Rosenfeld and paintings by Kristoffer Zetterstrand. Initially released as what is now known as Minecraft Classic on May 17, 2009, the game was released as Minecraft 1.0 on November 18, 2011.

Mobs Mobs are living, moving game entities. The term "mob" is short for "mobile"[1] and has been used as a general term referring to any moving entities in games since the first MUDs surfaced. General behavior Mobs are affected by the environment in the same ways as the player: they are subject to physics, and they can be hurt by the same things that harm the player (catching on fire, falling, drowning, attacked by weapons, etc.). Some mobs may be resistant or immune to certain hazards, such as Nether mobs which are immune to fire. Mobs can ride minecarts and other mobs.

Minecraft Mods You are here: Home › Resources › Mods › Most Popular › All Time Disable Active Banner Post Your Mod! Most Popular Minecraft Mods 1 - 20 of 6,780 Microsoft replacing MinecraftEDU with new education edition A new education experience is coming to Minecraft Starting this summer, classrooms hooked on MinecraftEDU will be given the option of migrating to a new education-focused Minecraft title, recently announced by Microsoft who has acquired the rights to MinecraftEDU from Teacher Gaming, a Finnish company. The rebranded title, called Minecraft: Education Edition, will launch as a free trial this summer, and all MinecraftEDU subscribers will receive a yearlong subscription to the new game (they can also continue to use MinecraftEDU). In the meantime, Microsoft is reworking and expanding the new education edition especially for classrooms. In a statement, Microsoft alluded to working on a “transition plan” with Teacher Gaming, but said that further details — including if and when MinecraftEDU would be absorbed into the new title — would be worked out in the coming months. MinecraftEDU began in 2011 and has reached thousands of classrooms in more than 40 countries.