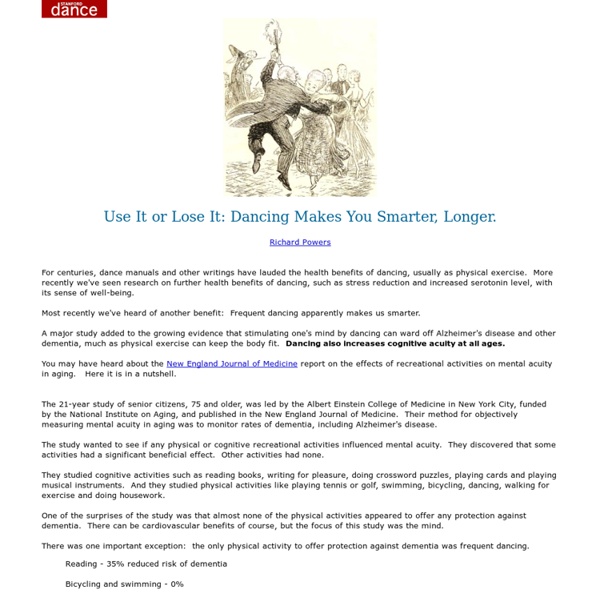 For centuries, dance manuals and other writings have lauded the health benefits of dancing, usually as physical exercise. More recently we've seen research on further health benefits of dancing, such as stress reduction and increased serotonin level, with its sense of well-being. Most recently we've heard of another benefit: Frequent dancing apparently makes us smarter. A major study added to the growing evidence that stimulating one's mind by dancing can ward off Alzheimer's disease and other dementia, much as physical exercise can keep the body fit. Dancing also increases cognitive acuity at all ages. You may have heard about the New England Journal of Medicine report on the effects of recreational activities on mental acuity in aging. The 21-year study of senior citizens, 75 and older, was led by the Albert Einstein College of Medicine in New York City, funded by the National Institute on Aging, and published in the New England Journal of Medicine. Neuroplasticity Aging and memory

random funny pictures Home Upload The Big Book of Yoga: The Yoga Family Treehouse (page 1 of 4) Yoga has been around for a long, long time. The earliest reliable evidence we have of Yoga being practiced in ancient India is a carving from the early Indus Valley settlement, Mohenjo-Daro, possibly dating back to 3300 BCE1. By way of comparison, Lao Tze, Socrates, and Buddha wouldn't be born until almost 3,000 years later.

MyStar Welcome! 8.8.2013: Had some intermittent server problems over the last couple of weeks. Things should be back up to speed now.