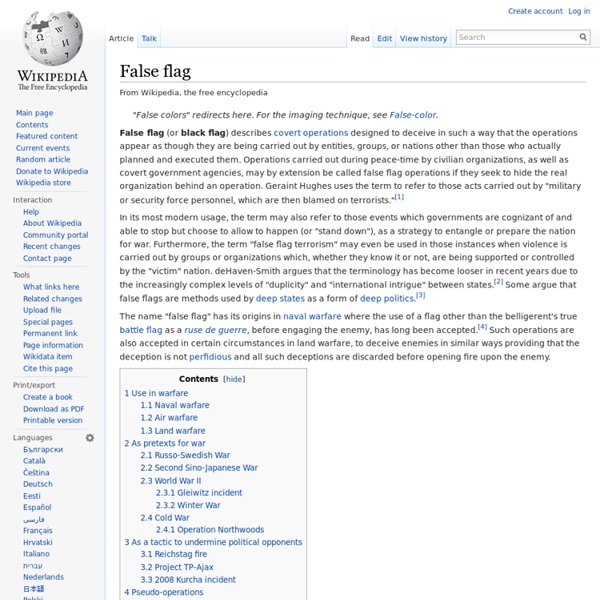 "False colors" redirects here. For the imaging technique, see False-color. False flag (or black flag) describes covert operations designed to deceive in such a way that the operations appear as though they are being carried out by entities, groups, or nations other than those who actually planned and executed them. Operations carried out during peace-time by civilian organizations, as well as covert government agencies, may by extension be called false flag operations if they seek to hide the real organization behind an operation. In its most modern usage, the term may also refer to those events which governments are cognizant of and able to stop but choose to allow to happen (or "stand down"), as a strategy to entangle or prepare the nation for war. Use in warfare[edit] [edit] Air warfare[edit] In December 1922–February 1923, Rules concerning the Control of Wireless Telegraphy in Time of War and Air Warfare, drafted by a commission of jurists at the Hague regulates:[9] Art. 3. Art. 19. 1.

Evidence Conclusive: Ukraine Military Shot Down MH17 In False Flag Operation There is now a growing body of irrefutable evidence which points directly to the MH17 shoot down being a classic false flag operation. Each piece of evidence definitively places at least three nations at the scene of both the crime and the cover-up. Whereas the Ukraine government and military executed this cold-blooded murder of innocent civilians, most likely under the direct supervision of the CIA, the US and UK governments have been implementing the non-stop coverup and false flag operation. What follows is a step-by-step refutation of the fake evidence advanced by the US, as well as a presentation of the true facts of this heinous crime. The chronology of events is particularly telling in how it chisels out the circumstantial, yet solid case, against the US/UK and Ukraine as co-conspirators. Summary of Evidence Malaysian Flight MH17, a Boeing 777 carrying a diverse group of civilian nationals, departed from Amsterdam en route to the Indonesian city of Jogjakarta. FIRST: George W.

Dirty War Declassified documents of the Chilean secret police cite an official estimate by the Batallón de Inteligencia 601 of 22,000 killed or "disappeared" between 1975 and mid-1978. During this period, in which it was later revealed 8,625 "disappeared" in the form of PEN detainees who were held in clandestine detention camps throughout Argentina before eventually being freed under diplomatic pressure.[11] The number of people believed to have been killed or "disappeared," depending on the source, range from 9,089 to 30,000 in the period from 1976 to 1983, when the military was forced from power following Argentina's defeat in the Falklands War.[12][13] The National Commission on the Disappearance of Persons estimates that around 13,000 were disappeared.[14] After democratic government was restored, Congress passed legislation to provide compensation to victims' families. The exact chronology of the repression is still debated, however, as in some senses the long political war started in 1969.

Zen Flower Radio The Destabilization of Ukraine: A Classic “False Flag” Operation | Global Research - Centre for Research on Globalization The main actors of the PNAC “All warfare is based on deception.” Sun Tzu (c. 544 BC – 496 BC), “The Art of War” “I know not with what weapons World War III will be fought, but World War IV will be fought with sticks and stones.” “World War III will be a guerrilla information war with no division between military and civilian participation.” Even though all that follows is public knowledge, it is important to connect the dots if one is to understand fully what has happened in Ukraine recently. As of now, the key figure of that policy of intervention in the affairs of other nations in the Obama administration is Victoria Nuland (1961- ), an Assistant Secretary of State for European and Euroasian Affairs at the State Department. Nuland is the wife of historian Robert Cagan, a Council on Foreign Relations member, and one of the co-founders with William Kristol of the infamous “Project for the New American Century” (PNAC) founded in 1997. The “New Pearl Harbor” Controversy Dr. To read Dr.

» 10 Facts That Prove The Bin Laden Fable Is a Contrived Hoax Alex Jones Paul Joseph Watson Infowars.com May 9, 2011 Merely a week after President Obama announced the death of Osama Bin Laden, there is literally a deluge of evidence that clearly indicates the whole episode has been manufactured for political gain and to return Americans to a state of post-9/11 intellectual castration so that they can be easily manipulated in the run up to the 2012 election. Here are ten facts that prove the Bin Laden fable is a contrived hoax…. 1) Before last Sunday’s raid, every intelligence analyst, geopolitical commentator or head of state worth their salt was on record as stating that Osama Bin Laden was already dead, and that he probably died many years ago, from veteran CIA officer Robert Baer, to former Pakistani Prime Minister Benazir Bhutto, to former FBI head of counterterrorism Dale Watson. 2) The official narrative of how the raid unfolded completely collapsed within days of its announcement. Fresh food that lasts from eFoods Direct (Ad) Print this page. BREAKING!

Everyone Agrees that Ukraine Sniper Attacks Were a False Flag ... They Only Argue About WHO Is the Culprit Washington's Blog Who Stood to Gain from a False Flag Operation? We pointed out Wednesday that the Estonian foreign minister claims that the new Ukrainian coalition deployed snipers to discredit the former government of Ukraine. We documented Thursday that snipers are a common form of false flag terrorism. Interestingly, while the new Ukranian coalition denies that it deployed snipers, it is now accusing someone else – Russia – of deploying the snipers as a false flag event to create chaos. AP reports today: One of the biggest mysteries hanging over the protest mayhem that drove Ukraine’s president from power: Who was behind the snipers who sowed death and terror in Kiev? Since Russia supported Yanukovych, it makes no sense that the people who ordered the sniper attacks would want to topple Yanukovych and launch a Russian invasion. In any event, AP continues: Russia has used the uncertainty surrounding the bloodshed to discredit Ukraine’s current government.

List of military tactics This page contains a list of military tactics. General tactics[edit] Force concentration - the practice of concentrating a military force against a portion of an enemy force[1]Exploiting prevailing weather - the tactical use of weather as a force multiplier has influenced many important battles throughout history, such as the Battle of Waterloo[2]Night combat - combat that takes place at night. It often requires more preparation than combat during daylight and can provide significant tactical advantages and disadvantages to both the attacker and defender[3]Reconnaissance - a mission to obtain information by visual observation or other detection methods, about the activities and resources of the enemy or potential enemy, or about the meteorologic, hydrographic, or geographic characteristics of a particular area.[4]Fire Attacks: Reconnaissance by fire is used by apprehensive soldiers when they suspect the enemy is lurking nearby. Small unit tactics[edit] Offensive tactics[edit]

The Israel-Gaza Twitter war Last week, Khulood Badawi, a U.N. relief worker in Jerusalem, tweeted a photograph of an injured Palestinian girl, saying “Palestine is bleeding. Another child killed by Israel. Another father carrying a child into a grave in Gaza.” The photograph, it turned out, was more than six years old — captured by a Reuters photographer, and depicting a child who had been injured in a swing accident. “She was not killed by Israeli forces,” Ron Prosor, Israel’s U.N. ambassador, wrote in a letter to the U.N. emergency coordinator, Valerie Amos, in which he demanded the woman be fired “Although Ms. The U.N.’s chief spokesman, Martin Nesirky, today confirmed that the tweet was not true, adding that “it is regrettable that an OCHA [Office for the Coordination of Humanitarian Affairs] staff member had posted information on her personal Twitter profile which was both false and which reflected on issues that are related to her work.”