Excerpt from How To Dance Through Time, Vol 2 Dances of the Ragtime Era. Gamelan is music ensemble which usually showed metallophones, such as : xylophone (Gambang), drums (Gendang), and gongs (Gong). 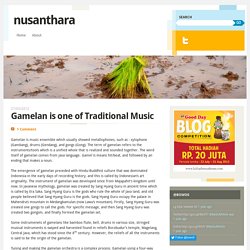 The term of gamelan refers to the instruments/tools which is a unified whole that is realized and sounded together. The word itself of gamelan comes from java language. Gamel is means hit/beat, and followed by an ending that makes a noun. Paris 1889 – A Treasury of World's Fair Art & Architecture. The 1889 Exposition Universelle, like all other nineteenth century fairs, was mainly concerned with the progress and modernization the "civilized" world had undergone. 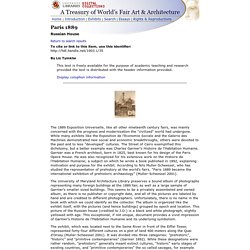 While many exhibits like the Exposition de l'Economie Sociale and the Galerie des Machines demonstrated new social and economic breakthroughs, others were devoted to the past and to less "developed" cultures. The Street of Cairo exemplified this dichotomy, but a better example was Charles Garnier's Histoire de l'Habitation Humaine. Garnier was a French architect, born in 1825, best known for his design of the Paris Opera House. "Grizzly Bear Rag" ~ Ophelia Orchestra @ The 1995 Scott Joplin Ragtime Festival ~ Sedalia, MO. 1889 Exposition Universelle Kampong Javanais 2r.