The Stanford Prison Experiment: A Simulation Study of the Psychology of Imprisonment 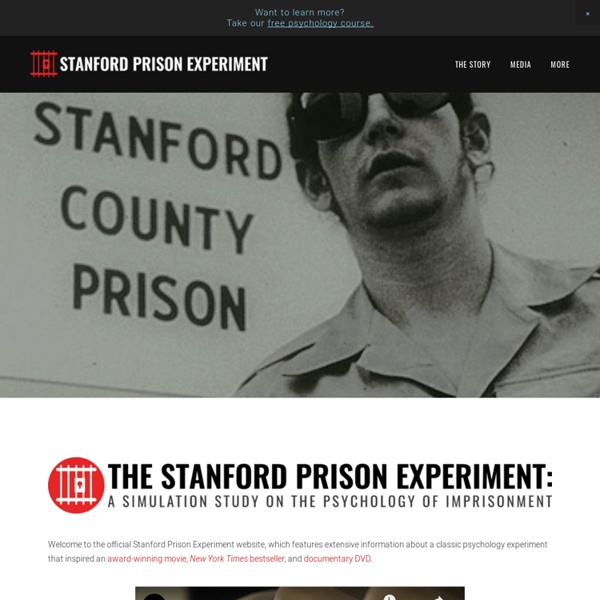 Welcome to the Stanford Prison Experiment web site, which features an extensive slide show and information about this classic psychology experiment, including parallels with the abuse of prisoners at Abu Ghraib. What happens when you put good people in an evil place? Does humanity win over evil, or does evil triumph? These are some of the questions we posed in this dramatic simulation of prison life conducted in the summer of 1971 at Stanford University. How we went about testing these questions and what we found may astound you. Our planned two-week investigation into the psychology of prison life had to be ended prematurely after only six days because of what the situation was doing to the college students who participated.

Milgram's Obedience Experiments By Kendra Cherry Updated December 16, 2015. If a person in a position of authority ordered you to deliver a 400-volt electrical shock to another person, would you follow orders? Most people would answer this question with an adamant no, but Yale University psychologist Stanley Milgram conducted a series of obedience experiments during the 1960s that led to some surprising results. These experiments offer a compelling and disturbing look at the power of authority and obedience.

Pavlov’s Dogs by Saul McLeod published 2007, updated 2013 Like many great scientific advances, Pavlovian conditioning (aka classical conditioning) was discovered accidentally. During the 1890s Russian physiologist Ivan Pavlov was looking at salivation in dogs in response to being fed, when he noticed that his dogs would begin to salivate whenever he entered the room, even when he was not bringing them food.

Animal Gender Roles Explained in Adorable Cartoons While arguments about gay people getting married tend to center on the so-called “natural” state of the human family, a quick peek around the animal kingdom reveals that sex and animal behavior don’t always break down into neat “one male, one female” units. And even in cases where animals do pair off to produce offspring, the burden of child-rearing doesn’t necessarily fall to the partner with two X chromosomes. Humon, the artist behind the webcomic Scandinavia and the World, uses cartoons to explain animal mating habits that fall outside the bounds of “traditional marriage” by anthropomorphizing the players in her trademark adorable style.In Scandinavia and the World, Humon portrays different countries as people, much like in the manga Hetalia. In her animal gender roles series, she takes a similar approach, portraying various animals as humans so that we can imagine how their family and mating structures might look among our own species.

Dreyfus model of skill acquisition In the fields of education and operations research, the Dreyfus model of skill acquisition is a model of how students acquire skills through formal instruction and practicing. Brothers Stuart and Hubert Dreyfus proposed the model in 1980 in an influential, 18-page report on their research at the University of California, Berkeley, Operations Research Center for the United States Air Force Office of Scientific Research.[1] The original model proposes that a student passes through five distinct stages: novice, competence, proficiency, expertise, and mastery. The original five-stage model[edit] Nanotubes and Buckyballs Home > Introduction > Nanotubes and Buckyballs Last Updated: Tuesday, 29-May-2012 06:53:42 PDT Go directly to Websites Nanotube: "Conceptually, single-wall carbon nanotubes (SWCNTs) can be considered to be formed by the rolling of a single layer of graphite (called a graphene layer) into a seamless cylinder.

10 Most Brilliant Social Experiments Ten of the most influential social psychology experiments. “I have been primarily interested in how and why ordinary people do unusual things, things that seem alien to their natures.Why do good people sometimes act evil?Why do smart people sometimes do dumb or irrational things?” –Philip Zimbardo Like eminent social psychologist Professor Philip Zimbardo (author of The Lucifer Effect: Understanding How Good People Turn Evil), I’m also obsessed with why we do dumb or irrational things. The answer quite often is because of other people – something social psychologists have comprehensively shown.

Melissani Undercover Cave and Lake One of the Ionian islands in Greece, Kefalonia is definitely the greenest and greatest. There’s great quantity of gorgeous nature and breathtaking landscape there. Vacationers and travelers who arrive here are fascinated by the magnificent rugged mountain ranges and also the valleys in between them which are full of number of vineyards. Just one of Kefalonia’s many well known sightseeing and tours points of interest that travelers can enjoy during their vacation is Melissani Lake. This massive underground cave was formed around one thousand years ago when the ceiling of a huge cave system broke down and tumbled in the sea beneath it uncovering the clear blue waters on the wonderful sunlight above. Whenever the sunshine its light arrive at the water from the large hole on the caves ceiling and the developing display of aqua blue natural light moving over the water is a thing that all travellers must see.

Pacific Sea Level Monitoring Project The Pacific Sea Level Monitoring (PSLM), operates under the Climate and Oceans Support Program in the Pacific (COSPPac). It is a continuation of the 20-year South Pacific Sea Level and Climate Monitoring Project (SPSLCMP) The 14 Pacific Island countries participating in the project are the Cook Islands, Federated States of Micronesia, Fiji, Kiribati, Marshall Islands, Nauru, Niue, Palau, Papua New Guinea, Samoa, Solomon Islands, Tonga, Tuvalu and Vanuatu. The primary goal of the project is to generate an accurate record of variance in long-term sea level for the Pacific region. The project also provides information about the processes, scale and implications of sea-level rise and variability of extreme events on South Pacific communities.

10 Famous Psychological Experiments That Could Never Happen Today Here are the stories behind the nicknames of the NFL’s 32 teams—and what they were almost called. All photos via Getty Images. Getty Images