Internet Addiction: A Brief Summary of Research and Practice. Online Social Networking and Addiction—A Review of the Psychological Literature. 1. 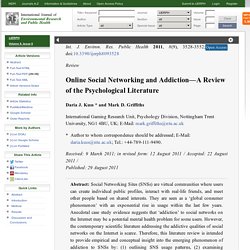 Introduction “I’m an addict. I just get lost in Facebook” replies a young mother when asked why she does not see herself able to help her daughter with her homework. Instead of supporting her child, she spends her time chatting and browsing the social networking site [1]. This case, while extreme, is suggestive of a potential new mental health problem that emerges as Internet social networks proliferate. The mass appeal of social networks on the Internet could potentially be a cause for concern, particularly when attending to the gradually increasing amounts of time people spend online [5].

Social Networking Sites are virtual communities where users can create individual public profiles, interact with real-life friends, and meet other people based on shared interests. Egocentrism has been linked to Internet addiction [14]. A behavioral addiction such as SNS addiction may thus be seen from a biopsychosocial perspective [16]. 3. 3.1. 3.2. Facebook Addiction' Activates Same Brain Areas As Drugs; How Social Media Sites Hook You In. The 2014 social media update from the Pew Research Center showed Facebook continues to be the most popular of the social media sites. 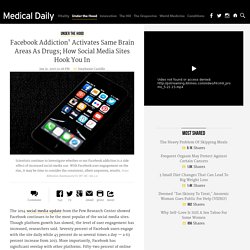 Though platform growth has slowed, the level of user engagement has increased, researchers said. Seventy percent of Facebook users engage with the site daily while 45 percent do so several times a day — a 63 percent increase from 2013. More importantly, Facebook has significant overlap with other platforms. Emotions Go Viral on Facebook. Feeling down? 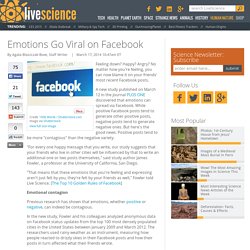 "For every one happy message that you write, our study suggests that your friends who live in other cities will be influenced by that to write an additional one or two posts themselves," said study author James Fowler, a professor at the University of California, San Diego. "That means that these emotions that you're feeling and expressing aren't just felt by you, they're felt by your friends as well," Fowler told Live Science. Emotional contagion. Facebook Emotions Are Contagious. Could reading a cheerful or depressing post on Facebook influence your own mood? 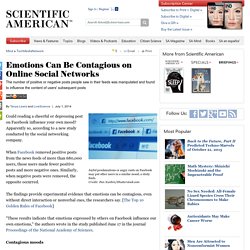 Apparently so, according to a new study conducted by the social networking company. When Facebook removed positive posts from the news feeds of more than 680,000 users, those users made fewer positive posts and more negative ones. Similarly, when negative posts were removed, the opposite occurred. The findings provide experimental evidence that emotions can be contagious, even without direct interaction or nonverbal cues, the researchers say. [The Top 10 Golden Rules of Facebook] "These results indicate that emotions expressed by others on Facebook influence our own emotions," the authors wrote in the study published June 17 in the journal Proceedings of the National Academy of Sciences. Contagious moods The idea that emotional states can spread among people without their awareness, known as emotional contagion, has been shown before in laboratory experiments. Cyber emotion. 36.pdf. Symptoms - Internet Addiction - Internet Addiction. 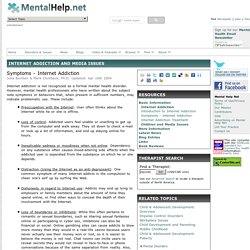 Updated: Apr 16th 2004 Internet addiction is not recognized as a formal mental health disorder. However, mental health professionals who have written about the subject note symptoms or behaviors that, when present in sufficient numbers, may indicate problematic use. These include: Preoccupation with the Internet: User often thinks about the Internet while he or she is offline. Compulsive Internet use - Melvin - Oct 9th 2014 [I have taken the time and liberty to improve (in my opinion) this part or section of your article. Differential Psychological Impact of Internet Exposure on Internet Addicts. Abstract The study explored the immediate impact of internet exposure on the mood and psychological states of internet addicts and low internet-users. 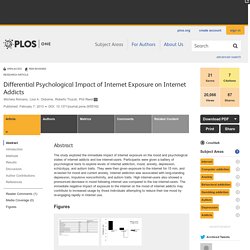