The Science and Philosophy of Friendship: Lessons from Aristotle on the Art of Connecting 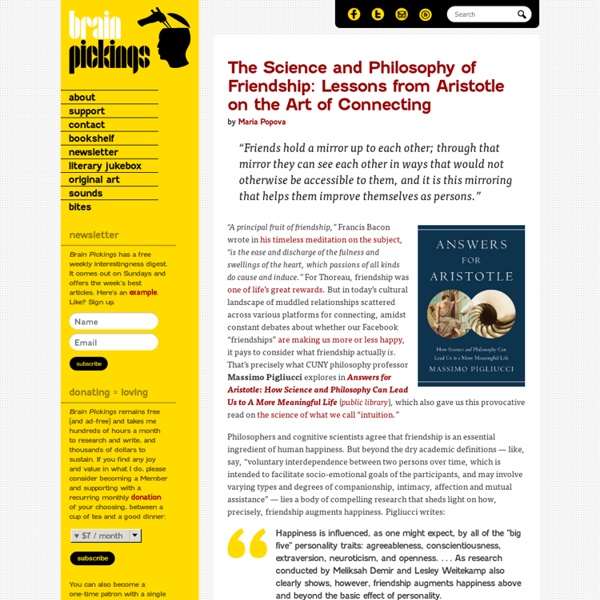 by Maria Popova “Friends hold a mirror up to each other; through that mirror they can see each other in ways that would not otherwise be accessible to them, and it is this mirroring that helps them improve themselves as persons.” “A principal fruit of friendship,” Francis Bacon wrote in his timeless meditation on the subject, “is the ease and discharge of the fulness and swellings of the heart, which passions of all kinds do cause and induce.” For Thoreau, friendship was one of life’s great rewards. Philosophers and cognitive scientists agree that friendship is an essential ingredient of human happiness. Happiness is influenced, as one might expect, by all of the “big five” personality traits: agreeableness, conscientiousness, extraversion, neuroticism, and openness. … As research conducted by Meliksah Demir and Lesley Weitekamp also clearly shows, however, friendship augments happiness above and beyond the basic effect of personality. Answers for Aristotle is excellent in its entirety.

Our Brains and Art 9Share Synopsis While most people know on some level that the arts can reach and move us in unique ways, there is actually science behind this. I am a sociologist by training. I come from academic world, reading scholarly articles on topics of social import, but they're almost always boring, dry and quickly forgotten. Yet I can't count how many times I've gone to a movie, a theater production or read a novel and been jarred into seeing something differently, learned something new, felt deep emotions and retained the insights gained. The arts can tap into issues that are otherwise out of reach and reach people in meaningful ways. The turn by many scholars to arts-based research is most simply explained by my opening example of comparing the experience of consuming jargon-filled and inaccessible academic articles to that of experiencing artistic works. Natalie Phillips (2012) used the fiction of Jane Austen in a study about how reading affects the brain. In 1963 famed sociologist Lewis A.

Movers and makers: the most powerful people in the art world | Art and design Gerhard Richter The greatest painter alive, and the most fastidious: his Cologne studio is spotless, every brush and squeegee clean. His diaries are a hoot too: "Art is wretched, cynical, stupid, helpless, confusing … worse than insanity" Ai Weiwei The most famous artist since Warhol, and a true polymath: sculptor, architect, digital pioneer, questionable heavy metal musician. Jeff Koons Cloyingly earnest, unfailingly polite and richer than you'll ever be. Cindy Sherman Conceptualist whose three decades of staged self-portraits – as a clown, as an heiress, as a Renaissance Madonna – transformed the reception of photography in museums and the market. Damien Hirst Like any shark, he has to keep moving to breathe. Isa Genzken If some kid's art looks innovative today, it's safe to assume Genzken did it 20 years ago. Matthew Barney Devastatingly handsome Yalie, baby-daddy to Björk, and the only heterosexual to spend a decade making art about muscles that raise and lower the testicles. Agnes Gund

How Diego Rivera Met the Fierce Teenage Frida Kahlo and Fell in Love with Her Years Later by Maria Popova “I did not know it then, but Frida had already become the most important fact in my life. And she would continue to be, up to the moment she died…” There is something singularly mesmerizing about the fateful encounters that sparked epic, often turbulent, lifelong love affairs — take, for instance, Gertrude Stein and Alice B. Toklas or Sylvia Plath and Ted Hughes. But one of modern history’s most vibrant, passionate, and tumultuous loves is that between legendary artists Frida Kahlo and Diego Rivera, the unusual and enchanting beginning of which is recounted first-hand in My Art, My Life: An Autobiography (public library) — a rare glimpse of Rivera’s inner life posthumously published in 1960, based on the interviews Gladys March conducted with the artist while shadowing him between 1944 and his death in 1957. Diego Rivera and Frida Kahlo in Mexico, 1933 (Photograph by Martin Munkácsi) 'Nothing compares to your hands, nothing like the green-gold of your eyes. Share on Tumblr

24 Haunting Images Of Abandoned Places That Will Give You Goose Bumps. #16 Is Insane. 1. I.M. Cooling Tower, Belgium These are parts of a cooling tower in an old power station in Monceau, Belgium. The trumpet-like structure in the middle introduced hot water to the structure, where it then cooled while dripping down hundreds of small concrete troughs and slats. 2. Kolmanskop was a small settlement in Namibia that saw a boom in the early 1900s when German settlers realized that the area was rich in diamonds. 3. 102-Year-Old Floating Forest in Sydney, Australia This is the hull of the SS Ayrfield, a large steam ship condemned to dismantling in Homebush Bay, Australia after WWII. 4. The Maunsell Sea Forts were erected near the Thames and Mersey rivers in Britain to help defend against potential German air or naval raids during WWII. 5. This house was part of what was once a fairly successful small island colony in Chesapeake Bay in the U.S. 6. Pripyat was established on Feb. 4th, 1970 in Ukraine near the border of Belarus as a Soviet nuclear city. 7. 8. 9. 10. 11. 12. 13.

Kurt Vonnegut on Reading, Boredom, Belonging, and Hate by Maria Popova “Hate, in the long run, is about as nourishing as cyanide.” What makes the commencement address such a singular pinnacle of the communication arts is that, in an era where religion is increasingly being displaced by culture and secular thought, it offers a secular version of the sermon — a packet of guidance on how to be a good human being and lead a good life. Kurt Vonnegut — a man of discipline, a champion of literary style, modern sage, poetic shaman of happiness, and one wise dad — endures as one of the most prolific and sought-after commencement speakers of all time. In one of the best speeches in the collection, Vonnegut addresses the graduating class at Fredonia College in New York on May 20, 1978. I suppose you will all want money and true love, among other things. But that, of course, isn’t it, as Vonnegut is no mere goof. I am being so silly because I pity you so much. We are all experiencing more or less the same lifetime now. We are supposed to be bored.

Charles Bukowski’s Top 10 Tips For Living A Kick-Ass Life Looking for some pointers on how to live an awesome life? Take it from Charles Bukowski, an American author, poet, short story writer, and novelist who shared his unfiltered views and opinions with the world on everything from art to death. He was a renowned and prolific writer, often depicting the experiences of the downtrodden and depraved people of American urban life, and he provided plenty of great tips on how to spend your days. But don’t just take my word for it, soak up the wisdom with this valuable advice from some his most well-known quotes. 1. “I wanted the whole world or nothing.” You shouldn’t settle for anything less than what you absolutely deserve or desire. 2. “I never met another man I’d rather be. 3. “What is terrible is not death but the lives people live or don’t live up until their death.” “Some people never go crazy, What truly horrible lives they must live.” Want to go skydiving but have never done it? 4. “You have to die a few times before you can really live.” 5.