How to Protect Your Computer from Hackers, Spyware and Viruses 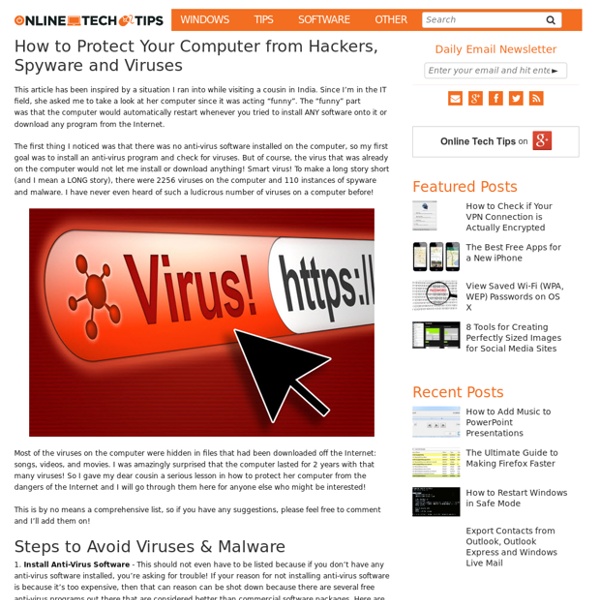 This article has been inspired by a situation I ran into while visiting a cousin in India. Since I’m in the IT field, she asked me to take a look at her computer since it was acting “funny”. The “funny” part was that the computer would automatically restart whenever you tried to install ANY software onto it or download any program from the Internet. The first thing I noticed was that there was no anti-virus software installed on the computer, so my first goal was to install an anti-virus program and check for viruses. Most of the viruses on the computer were hidden in files that had been downloaded off the Internet: songs, videos, and movies. This is by no means a comprehensive list, so if you have any suggestions, please feel free to comment and I’ll add them on! 1. Avira – Avira has a free version that was ranked #3 in 2014 for detecting viruses. Bitdefender – Bitdefender had the second highest detection rate and they also have a free edition. 2. 3. 4. 5. 6. 7. 8. 9. 10. 11. 12.

FTC sees privacy threats in the 'Internet of Things' - Katy Bachman - POLITICO As consumers buy up fitness trackers, Internet-connected thermostats and even Web-enabled cars and toothbrushes, the Federal Trade Commission has a message: It’s watching. The agency is warning that as millions of new smart devices make people’s daily lives more convenient, they’re also collecting reams of personal information that raise new privacy and data security concerns. Story Continued Below The nascent sector — known as the “Internet of Things” and embraced by companies from Google to Intel — is still largely unregulated, and the FTC is hoping a set of recommendations it released Tuesday will goad companies into building consumer data protections into their systems. “The only way for the Internet of Things to reach its full potential for innovation is with the trust of American consumers,” said FTC Chairwoman Edith Ramirez. Not all the commission members are on board with her campaign.

Net Threats Experts say liberty online is challenged by nation-state crackdowns, surveillance, and pressures of commercialization of the Internet As Internet experts look to the future of the Web, they have a number of concerns. This is not to say they are pessimistic: The majority of respondents to this 2014 Future of the Internet canvassing say they hope that by 2025 there will not be significant changes for the worse and hindrances to the ways in which people get and share content online today. Still, some express wide levels of concern that this yearning for an open Internet will be challenged by trends that could sharply disrupt the way the Internet works for many users today as a source of largely unfettered content flows. The Net Threats These Experts Fear We call this research study a canvassing because it is not a representative, randomized survey. More than 1,400 people responded to the following yes-or-no question: A share of these experts express new urgency about surveillance. Peter S.

The Five Biggest Threats to Your Kids’ Privacy, and What You Can Do About Them Remember back in school, when your teachers warned that everything you did would go on your permanent record? It turns out your teachers have become right. That permanent record is the Internet. It’s hard to be a fully functioning adult in 2014 and not leave behind a digital trail. Now imagine how hard it is for your kids, who have never known a world where the net did not exist. From the moment they emerge from the womb, they’re generating data, which is then eagerly absorbed and stored by Internet companies, government agencies and some evil no-goodniks. Despite federal laws prohibiting the collection of data from children under the age of 13, dossiers are constantly being created about your kids, whether it’s Google capturing their search histories, advertisers creating profiles of their interests, or their grandparents tagging photos of them on Facebook. Canadian Singles Find New Ways To Meet UrthBox Healthy Snack Boxes. Math Practice - Ages 5-15 Questions, complaints, kudos?

Remotely Monitor Cell Phones and Computers with Mobistealth Malware Malware, short for malicious software, is any software used to disrupt computer operation, gather sensitive information, or gain access to private computer systems.[1] Malware is defined by its malicious intent, acting against the requirements of the computer user, and does not include software that causes unintentional harm due to some deficiency. The term badware is sometimes used, and applied to both true (malicious) malware and unintentionally harmful software.[2] In law, malware is sometimes known as a computer contaminant, as in the legal codes of several U.S. states.[6][7] Spyware or other malware is sometimes found embedded in programs supplied officially by companies, e.g., downloadable from websites, that appear useful or attractive, but may have, for example, additional hidden tracking functionality that gathers marketing statistics. Purposes[edit] Malware by categories on 16 March 2011. Proliferation[edit] Infectious malware: viruses and worms[edit] Viruses[edit] Rootkits[edit]

The top 10 things you can do to keep your Macintosh safe on the Internet If you're reading this list, you probably know that the Mac is one of the best machines around when it comes to keeping you secure on the Internet. But it's also been receiving more scrutiny from the press and security professionals recently, and no machine is 100% safe. As the Mac becomes more popular, and as more services become Internet-based and cross-platform, so do the associated risks. You can help keep not only your Macintosh, but also the Macintosh community as whole secure on the Internet by taking a few simple steps beyond those many significant ones that Apple has built into Mac OS X. Here's our "top 10" list. 0. 1. Special bonus item (for advanced users): Consider running your Mac as a non-administrative user most of the time. General security note: You should always have as many levels of defense as you can, just like in the physical world.

SafeKids.com | Digital citizenship, online safety & civility Best Antivirus Software for Mac 2015 - Tom's Guide You need an antivirus program on your Mac. That statement may cause some Apple users to shake their heads in disbelief, but with the amount of malware on the Internet today, this fact is no longer up for debate. After evaluating six free and paid Mac antivirus products, Avira Free Mac Security is our top pick, thanks to its perfect malware detection scores and intuitive interface. If you’re willing to pay for protection, Bitdefender Antivirus for Mac had the least impact on system performance of any solution we reviewed. How We Tested For all six Mac antivirus products we reviewed in this round, our testing was conducted on a mid-2012 15-inch MacBook Pro running OS X Yosemite 10.10.3. Each antivirus software package was evaluated according to three criteria: efficacy against malware, performance impact and user experience. To gauge how effective each package was at stopping malware, we used the results of evaluations conducted by AV-TEST, a well-regarded independent lab in Germany.

Do you need antivirus on Android? We ask the experts Android has been around for several years now and yet the topic of security continues to be the source of some argument. On the one hand you have the idea that Android is not susceptible to virus threats and, provided you are careful about what you download, there is no real need for antivirus software. On the other, you have reports and statistics claiming that malware is frighteningly common and any Android device without protection is sure to get infected. So where does the truth lie? Updated on 2-12-2015 by Simon Hill: Edited and updated text, added comments from Filip Chytrý at Avast, Adrian Ludwig at Google, Andreas Marx at AV-Test, and some new links and references. Antivirus is just part of the package We already took a look at the top security apps on the Android platform and found that they tend to offer a lot more than just antivirus protection. To have a smartphone in your pocket without a remote wipe possibility is a dangerous thing. Malware, fact or fiction? Avast

Kishore, Aseem (2014). How to protect your computer from hackers, spyware and viruses. Retrieved from by estherpepin Mar 9