Great Stag Hunt - Peoples Trust for Endangered SpeciesPeoples Trust for Endangered Species. Take Two Hours of Pine Forest and Call Me in the Morning. Grove of aspens (Populoides sp.) in deep snopw, low section, winter Photo: Michael Turek/Getty Images I was supposed to be listening to the cicadas and the sound of a flowing creek when a Mitsubishi van rumbled across a small steel bridge just downstream. 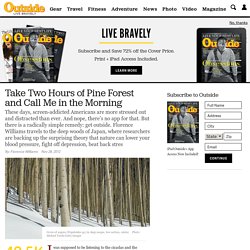 It was probably depositing campers at a nearby tent village, where kids were running around with their fishing poles and pink bed pillows. This was nature, Japan style. I was in Chichibu-Tama-Kai National Park, a 75-minute train ride northwest of Tokyo, with half a dozen other hikers out for a dose of shinrin-yoku, or forest bathing. The Japanese go crazy for this practice, which is standard preventive medicine here. “People come out from the city and literally shower in the greenery,” our guide Kunio explained.

We needed this. “When I’m out here, I don’t think about things,” he said. “What’s the Japanese word for stress?” “Stress,” he said. “The Japanese work is essential, a Rosetta stone,” says Alan C. I reflect most of these trends. Nature Connection Will Be the Next Big Human Trend  Something is amiss and we can't quite put our finger on what. 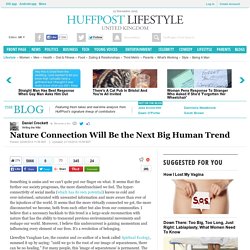 It seems that the further our society progresses, the more disenfranchised we feel. The hyper-connectivity of social media (which has its own potential) leaves us cold and over-informed, saturated with unwanted information and more aware than ever of the injustices of the world. It seems that the more virtually connected we get, the more disconnected we become, both from each other but also from our communities. I believe that a necessary backlash to this trend is a large-scale reconnection with nature that has the ability to transcend previous environmental movements and reshape our world. Moreover, I believe this undercurrent is gaining momentum and influencing every element of our lives.

Llewellyn Vaughan-Lee, the curator and co-author of a book called Spiritual Ecology, summed it up by saying: "until we go to the root of our image of separateness, there can be no healing. " So what are we looking at here? After Seeing These Photos, I Will Never Look At Earth The Same Again! Unreal! #1 Volcanic Lightning - Sometimes, when a volcano explodes, it releases a powerful amount of energy into the atmosphere. 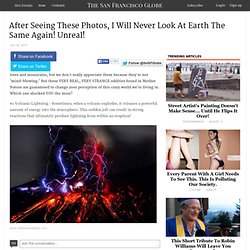 This sudden jolt can result in strong reactions that ultimately produce lightning from within an eruption! Uploading... #6 Morning Glory Clouds - Not even scientists can figure out what causes this wonder of the world. So, when you see one, just appreciate it for its overall awesomeness! Unreal. #7 Red Crabs of Christmas Island - There are over 120 million crabs on the island. . #8 The 'Door To Hell' - This natural gas vent in Turkmenistan has been a popular tourist attraction because its flame hasn't gone out since it was initially lit in 1971! #9 Auroras - This breathtaking phenomenon happens when wind particles pick up speed as they travel along magnetic fields and head skyward to the atmosphere - where they abruptly smash into gas atoms and result in a multicolored horizon. #14 Danxia Landforms - What happens when million-year-old minerals combine with red sandstone?

The world's 10 oldest living trees. One of The Planet's Most Important Species Is About to Disappear for Good. Monarch butterflies: In the mid 1990s, enough of these majestic creatures circled the American skyline to cover nearly 40 football fields. 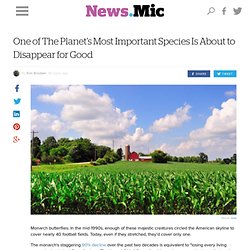 Today, even if they stretched, they'd cover only one. The monarch's staggering 90% decline over the past two decades is equivalent to "losing every living person in the United States" minus "Florida and Ohio. " So earlier this week, conservationists called on the federal government to list them as a threatened species — an official designation that would allow the creation of protected areas for the creatures to rebuild their population. Who cares? You should. While it might sound like a great idea, saying goodbye to bugs would wreck havoc on the planet. Plus, whatever is killing the butterflies is also killing bees, on which nearly 90% of the world's plants and 100 American crops rely for survival. Why are they disappearing?

Unfortunately, one of those weeds is milkweed, the single plant on which monarch butterflies can lay their eggs.