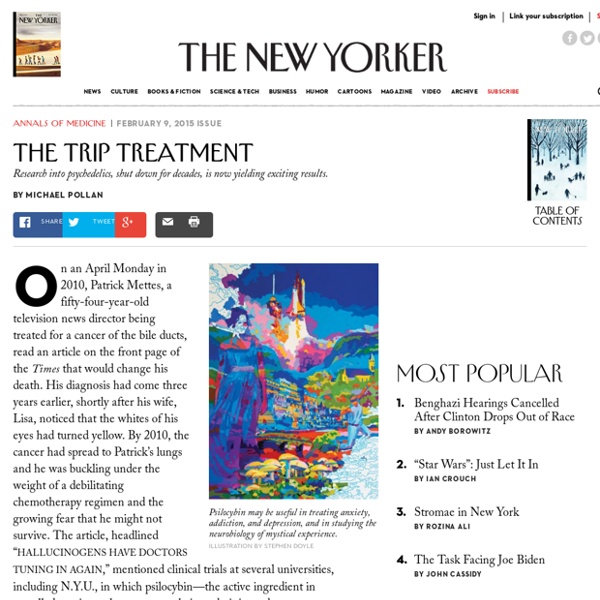 On an April Monday in 2010, Patrick Mettes, a fifty-four-year-old television news director being treated for a cancer of the bile ducts, read an article on the front page of the Times that would change his death. His diagnosis had come three years earlier, shortly after his wife, Lisa, noticed that the whites of his eyes had turned yellow. By 2010, the cancer had spread to Patrick’s lungs and he was buckling under the weight of a debilitating chemotherapy regimen and the growing fear that he might not survive. The article, headlined “Hallucinogens Have Doctors Tuning in Again,” mentioned clinical trials at several universities, including N.Y.U., in which psilocybin—the active ingredient in so-called magic mushrooms—was being administered to cancer patients in an effort to relieve their anxiety and “existential distress.” Patrick made the call anyway and, after filling out some forms and answering a long list of questions, was accepted into the trial. The clinical trials at N.Y.U.

Interview with a Torturer Rithy Panh with Christophe Bataille | Translated by John Cullen | The Elimination: A survivor of the Khmer Rouge confronts his past and the commandant of the killing fields | Other Press | February 2013 | 44 minutes (12,355 words) Below is an excerpt from the book The Elimination, by Rithy Panh, as recommended by Longreads contributor Dana Snitzky. Kaing Guek Eav, known as Comrade Duch, was the commandant of Security Prison 21—the S-21 torture and execution center in Phnom Penh, Cambodia—from 1975 to 1979. He chose his nom de guerre, he explains, from a book he remembers reading in his childhood; in the book little Duch was a “good boy.” At least 12,380 people were tortured in that prison.

Why the government should be funding mass scientific studies of Ecstasy, magic mushrooms, and LSD Medical drugs are pretty nice. From antibiotics to chemotherapy to good old aspirin, not a day goes by that millions of people don't benefit from pharmaceutical medicine — even granting the occasional disaster. But the American model of drug development is badly flawed. Transcending Boundaries: Identity and Oppression Within Psychedelic Culture - The Nexian By VTSeeker48 on Wednesday, 26 November 2014, hits: 2001 “Psychedelics are illegal not because a loving government is concerned that you may jump out of a third story window. Psychedelics are illegal because they dissolve opinion structures and culturally laid down models of behaviour and information processing. They open you up to the possibility that everything you know is wrong

Chinese designer depicts Eastern vs. Western human behaviors in clever pictographs We almost wonder whether Yang Liu, a Beijing-born designer who has lived in Germany since 1990, was tripping when she put together these hip, riddle-like pictographs that abstractly convey behavioral differences between Westerners and Easterns; or more specifically, Germans and Chinese. Relying on her experiences in Europe and China, Liu put together these clever designs that are a sort of Rorschach test for which region you identify with. We found ourselves staring and trying to figure out what they stood for, then nodding in agreement about one side or the other, but not always the side Liu expected us to identify with. Of course, it’s never good to make gross generalizations about entire groups of people – we’re sure there are a lot of Germans who do sort of meander around what they really want to say hoping the listener will get the hint, and we have plenty of Chinese friends who actually do know how to line up properly. So, do take these with a grain of salt. How they give opinions.

When Silicon Valley takes LSD - Jan. 25, 2015 NEW YORK (CNNMoney) Herbert, who works at Cisco, has been in the tech sphere for decades. For him, geek-dom and psychedelics have intersected since the start of his adult life: The first LSD he took was created in an M.I.T. lab at and consumed at a science fiction convention. In Silicon Valley, there is a premium on creativity, and tools thought to induce or enhance it are avidly sought. Some view psychedelics as a weapon in the arsenal, a way to approach problems differently.

Psychopharmacology An arrangement of psychoactive drugs The field of psychopharmacology studies a wide range of substances with various types of psychoactive properties, focusing primarily on the chemical interactions with the brain. Psychoactive drugs interact with particular target sites or receptors found in the nervous system to induce widespread changes in physiological or psychological functions. The specific interaction between drugs and their receptors is referred to as "drug action", and the widespread changes in physiological or psychological function is referred to as "drug effect". These drugs may originate from natural sources such as plants and animals, or from artificial sources such as chemical synthesis in the laboratory.

The Hills Was Fake? Say It Isn’t So! Okay, so The Hills, a supposed reality series about life after Laguna Beach, ended last night. For six seasons we watched relationships come and go in the day to day lives of actors and actresses, and we were supposed to believe it was real and unscripted. There has been a lot of talk over the years about how there is no way it could be real, but MTV constantly said it was. Well last night’s finale led you to believe differently. Every storyline had a conclusion, including Brody and Kristin’s. Kristin pulled away in a car, and Brody stood watching with the sun and mountains behind him. plant family Plant family Alternative title: Nymphaeaceae water lily (family Nymphaeaceae), water lily: water liliesTerry W. Eggers/Corbisany of 58 species in 6 genera of freshwater plants native to the temperate and tropical parts of the world.

Marijuana's long-term effects on the brain demonstrated The effects of chronic marijuana use on the brain may depend on age of first use and duration of use, according to researchers at the Center for BrainHealth at The University of Texas at Dallas. In a paper published today in Proceedings of the National Academy of Sciences (PNAS), researchers for the first time comprehensively describe existing abnormalities in brain function and structure of long-term marijuana users with multiple magnetic resonance imaging (MRI) techniques. Findings show chronic marijuana users have smaller brain volume in the orbitofrontal cortex (OFC), a part of the brain commonly associated with addiction, but also increased brain connectivity.

Mimosa (Jurema) Vault : DMT for the Masses NOTE: Before performing any extraction procedure, it is always a good idea to read the entire description of the process from start to finish. Please see the Addendum at the end of this tek for additional tips, refinements, and clarifications regarding to the processes described. Also see the related article Keep that Mimosa Mud? by J. Band moving with migrant wave shows different side to crisis - SCNow: Headlines ZAGREB, Croatia (AP) — The band members arrived like so many other Syrian refugees, climbing out of a dinghy on the shores of the Greek island of Lesbos. But instead of heading for a migrant camp or the ferry terminal, Khebez Dawle started chatting with the tourists basking on the beach outside the Aphrodite Hotel. "We said hello. We were happy faces having fun. ... Usually they see scared people, sad faces, children landing," said lead singer Anas Maghrebi.

cable television network Alternative title: Music Television MTV, in full Music Television, MTV: original veejaysNeal Preston/Corbiscable television network that began as a 24-hour platform for music videos. MTV debuted just after midnight on August 1, 1981, with the broadcast of “Video Killed the Radio Star” by the Buggles. Following the format of Top 40 radio, video disc jockeys (or “veejays”) introduced videos and bantered about music news between clips. After an initial splash, the network struggled in its early years.