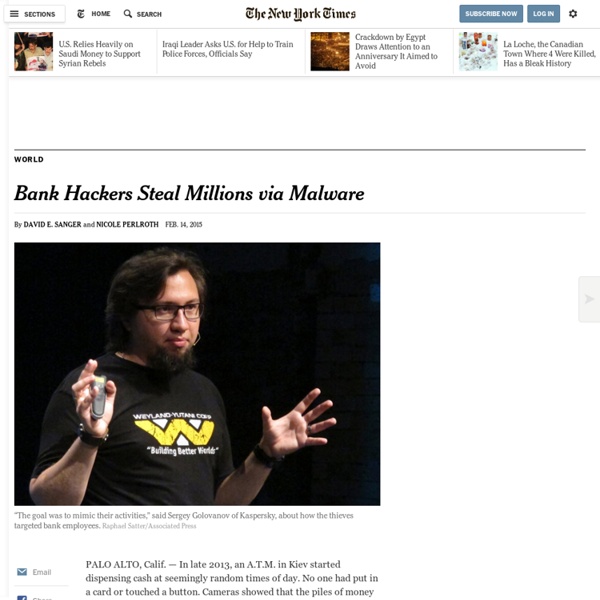 Photo PALO ALTO, Calif. — In late 2013, an A.T.M. in Kiev started dispensing cash at seemingly random times of day. No one had put in a card or touched a button. Cameras showed that the piles of money had been swept up by customers who appeared lucky to be there at the right moment. But when a Russian cybersecurity firm, Kaspersky Lab, was called to Ukraine to investigate, it discovered that the errant machine was the least of the bank’s problems. The bank’s internal computers, used by employees who process daily transfers and conduct bookkeeping, had been penetrated by malware that allowed cybercriminals to record their every move. Then the group impersonated bank officers, not only turning on various cash machines, but also transferring millions of dollars from banks in , , Switzerland, the United States and the Netherlands into dummy accounts set up in other countries. Continue reading the main story Transferring money into hackers’ fraudulent bank accounts fraudulent accounts overseas Mr.

Mobile Malware: Small Numbers, but Growing THE warning was dire: A small security company revealed a flaw in millions of smartphones that could allow dangerous software to masquerade as a legitimate app and seize control of a phone. The threat was a big conversation topic at this year’s Black Hat security conference. But after that, we didn’t hear much more about it. Malware Malware, short for malicious software, is any software used to disrupt computer operation, gather sensitive information, or gain access to private computer systems.[1] Malware is defined by its malicious intent, acting against the requirements of the computer user, and does not include software that causes unintentional harm due to some deficiency. The term badware is sometimes used, and applied to both true (malicious) malware and unintentionally harmful software.[2] In law, malware is sometimes known as a computer contaminant, as in the legal codes of several U.S. states.[6][7]

How to Protect Your Computer from Hackers, Spyware and Viruses This article has been inspired by a situation I ran into while visiting a cousin in India. Since I’m in the IT field, she asked me to take a look at her computer since it was acting “funny”. The “funny” part was that the computer would automatically restart whenever you tried to install ANY software onto it or download any program from the Internet. The Five Biggest Threats to Your Kids’ Privacy, and What You Can Do About Them Remember back in school, when your teachers warned that everything you did would go on your permanent record? It turns out your teachers have become right. That permanent record is the Internet. It’s hard to be a fully functioning adult in 2014 and not leave behind a digital trail. Now imagine how hard it is for your kids, who have never known a world where the net did not exist.

Which nation-state is behind the sophisticated, stealthy Regin malware? Symantec Security Response has discovered a new malware called Regin which, they say, "...displays a degree of technical competence rarely seen and has been used in spying operations against governments, infrastructure operators, businesses, researchers, and private individuals." This back-door trojan has been in use, according to the security company, since at least 2008, and has stayed under the radar since. The level of quality and the amount of effort put into keeping it secret convinces Symantec that it is a primary cyberespionage tool of a nation state. Regin is a multi-stage attack, each stage but the first encrypted and none by themselves especially revealing about the overall attack. The picture only emerges when you have all five stages.

Your Boss Is Watching In a recent study on Internet deprivation, people forced to live without Net access for two weeks said they missed the "private space" the Internet provided them at work. Well, I have news for you. That Internet account you have at work is not your private space. It's also your boss's space, and your boss's boss's space, and so on up the line. In fact, if you think you have any real privacy on the job, you're laboring under a delusion. How to Tell if your Cell Phone is Being Tracked, Tapped or Monitored by Spy Software - SpyzRus.net There are a few signs that may help you find out if your cell phone has spy software installed and that it is being tracked, tapped or monitored in some way. Quite often these signs can be quite subtle but when you know what to look out for, you can sometimes find out if your cell phone is being spied on. This article series will deal with How to Find installed Spy Phone Software and then How to Remove Spy Software followed by How to Secure your Cell Phone. This guide should help for all types of Smartphone including Android and for the iPhone there are a few extra tips. It seems that almost everyone is obsessed with cell phones, from young kids’ right through to the elderly.