How to Tell if your Cell Phone is Being Tracked, Tapped or Monitored by Spy Software - SpyzRus.net 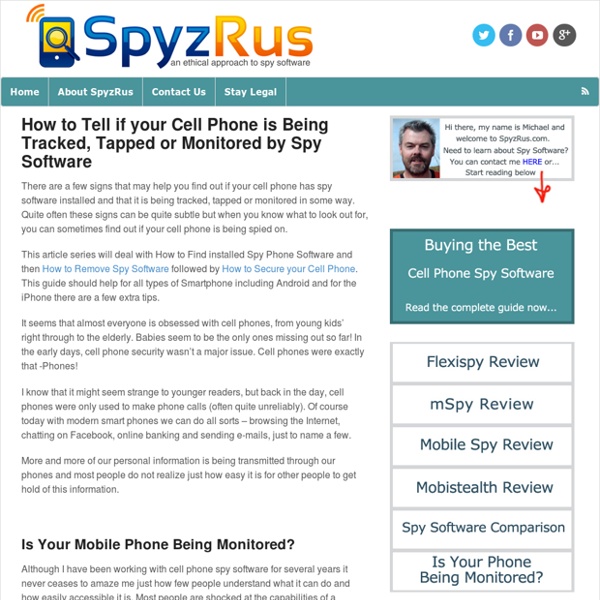 There are a few signs that may help you find out if your cell phone has spy software installed and that it is being tracked, tapped or monitored in some way. Quite often these signs can be quite subtle but when you know what to look out for, you can sometimes find out if your cell phone is being spied on. This article series will deal with How to Find installed Spy Phone Software and then How to Remove Spy Software followed by How to Secure your Cell Phone. This guide should help for all types of Smartphone including Android and for the iPhone there are a few extra tips. It seems that almost everyone is obsessed with cell phones, from young kids’ right through to the elderly. Babies seem to be the only ones missing out so far! I know that it might seem strange to younger readers, but back in the day, cell phones were only used to make phone calls (often quite unreliably). Is Your Mobile Phone Being Monitored? spy software apps. Detecting Cell Phone Spy Software

TOP Spy Cell Phone Software Reviews. Before you select Cell Phone Spy Software you should learn what exactly it is used for and how it works on a target mobile device. Make sure you study the popular cell phone tracking applications reviews we provide to make a conscious choice of the spy software. Don’t forget there are online companies that misinform their clients with the aim of getting higher profits. Unlike them we are interested in long-term mutually beneficial cooperation and we ask you to report us about any suspicious firms you’ve faced (either in your comment or by an email)! What is more, we want to make our applications better with your help! #1 HighsterMobile - 10/10 Rating: Highster Mobile is very powerful and useful cell phone monitoring app. #2 Spyera - 9/10 Rating: Spyera Phone version is software that you install on a smart phone to monitor everthing happening on the phone. #3 Spyrix - 9/10 Rating: #4 FlexiSpy - 9/10 Rating: Some words about cell phone trackers It is really useful? How is it used? Usability

How to Protect Your Computer from Hackers, Spyware and Viruses This article has been inspired by a situation I ran into while visiting a cousin in India. Since I’m in the IT field, she asked me to take a look at her computer since it was acting “funny”. The “funny” part was that the computer would automatically restart whenever you tried to install ANY software onto it or download any program from the Internet. The first thing I noticed was that there was no anti-virus software installed on the computer, so my first goal was to install an anti-virus program and check for viruses. Most of the viruses on the computer were hidden in files that had been downloaded off the Internet: songs, videos, and movies. This is by no means a comprehensive list, so if you have any suggestions, please feel free to comment and I’ll add them on! 1. Avira – Avira has a free version that was ranked #3 in 2014 for detecting viruses. Bitdefender – Bitdefender had the second highest detection rate and they also have a free edition. 2. 3. 4. 5. 6. 7. 8. 9. 10. 11. 12.

How can I protect my Windows PC against malware? | Technology I have just ordered a Windows PC based on your recommendation, and now ask for your advice on anti-spyware and virus protection software for it. Any help you could offer me would be greatly appreciated. Mary Mass-market malware is a numbers game, played mostly with familiar off-the-shelf exploit kits (EKs). I ran into one yesterday when the Labour party press team unintentionally ("we were hacked") tweeted a link to an owl video that wanted me to install a "Flash update" that contained viruses. Just doing the right things is usually enough to keep more than 98% of Windows PCs malware free, barring accidents. Keep up to date The vast majority of malware infections exploit security holes that have already been fixed, so the most important part of PC hygiene is to keep all your software up to date. Some other programs – including the Firefox and Google Chrome browsers – will also install patches automatically. Further, I strongly recommend installing Secunia's Personal Software Inspector.

GameOver Zeus: Removal, detection and how you can protect yourself - News - Gadgets and Tech - The Independent The warning came after the FBI successfully disrupted a major cybercriminal network in the US from using the viruses to infect computers and steal data. GameOver Zeus, also known as P2PZeuS, was designed by Russia and Ukrainian gangs to find and harness computer files that give access to banking and financial information, while Cryptolocker encrypts all files on a target’s computer and demands the user pays around £300 to unlock the file. Almost 250,000 computers worldwide have been infected with CryptoLocker since it emerged in April and it has so far been used to extort payments of more than $27m (£16m), according to the FBI. Industry experts have been quick to back up the stern message from the National Crime Agency, whose advice to visit internet awareness group Get Safe Online's's website led to the site going down for 15 hours. Below are some methods experts recommend to protect yourself from GameOver Zeus and CryptoLocker, and remove it if you suspect you computer is infected.

How Do I Protect Myself Against Malware? | Surveillance Self-Defense The best way to deal with a malware attack is to avoid getting infected in the first place. This can be a difficult feat if your adversary has access to zero day attacks—attacks that exploit a previously-unknown vulnerability in a computer application. There are many ways in which an attacker might try to trick you into installing malware on your computer. For example, in Syria, pro-Assad hackers targeted members of the opposition with malware hidden in fake revolutionary documents and a fake anti-hacking tool. The best way to avoid being infected with this kind of targeted malware is to avoid opening the documents and installing the malware in the first place. Another thing you can do to protect your computer against malware is to always make sure you are running the latest version of your software and downloading the latest security patches.

10 Ways To Protect Yourself From Identity Theft 10 Ways To Protect Yourself From Identity Theft Shielding your private information with no risk of a breakdown may be impossible these days. But there are some simple ways to protect you from becoming a victim of Identity Theft. The Houston Police Department is providing these simple, but very important, tips to protect you and your name. 1. Destroy private records and statements. 2. 3. 4. 5. 6. 7. 8. 9. 10. Click here for HPD's Identity Theft Brochure (pdf file.) For additional information, please refer to the below sites: www.consumer.gov/idtheft/ (Federal Trade Commission) www.cops.usdoj.gov/mime/open.pdf? www.privacyrights.org/fs/fs17a.htm (Identity Theft: What to Do if It Happens to You) www.idtheftcenter.org (For Information on consumer based items click on consumer resources on the left side of the page) Go get consumer or victim related information click on consumer or victim on the left side of the page. www.idsafety.org/ www.oag.state.tx.us/AG_Publications/pdfs/idtheft_pf.pdf

Which nation-state is behind the sophisticated, stealthy Regin malware? | ZDNet Symantec Security Response has discovered a new malware called Regin which, they say, "...displays a degree of technical competence rarely seen and has been used in spying operations against governments, infrastructure operators, businesses, researchers, and private individuals." This back-door trojan has been in use, according to the security company, since at least 2008, and has stayed under the radar since. The level of quality and the amount of effort put into keeping it secret convinces Symantec that it is a primary cyberespionage tool of a nation state. Regin is a multi-stage attack, each stage but the first encrypted and none by themselves especially revealing about the overall attack. The picture only emerges when you have all five stages. Attacks were committed between 2008 and 2011 (Regin 1.0), at which point the malware disappeared. Even so, there is still much about Regin that they do not understand.

Mobile Malware: Small Numbers, but Growing THE warning was dire: A small security company revealed a flaw in millions of smartphones that could allow dangerous software to masquerade as a legitimate app and seize control of a phone. The threat was a big conversation topic at this year’s Black Hat security conference. But after that, we didn’t hear much more about it. Perhaps that should not be surprising. A recent report by the security company McAfee said that there was a 197 percent increase in mobile malware from 2012 to 2013. The actual number of phones hit by mobile malware, however, is tiny. Photo By comparison, the recent hack of Home Depot’s computer network affected 56 million cardholders. So is mobile malware a threat? But if you’re not a celebrity or a protester, and you’re not carrying corporate or government secrets on your device, it is certainly not your biggest computer security problem. Phones can get infected when someone accidentally downloads a malicious app. “On the scale of PC threats, that is lower,” Mr.