How to Build a Simple Arduino Robot 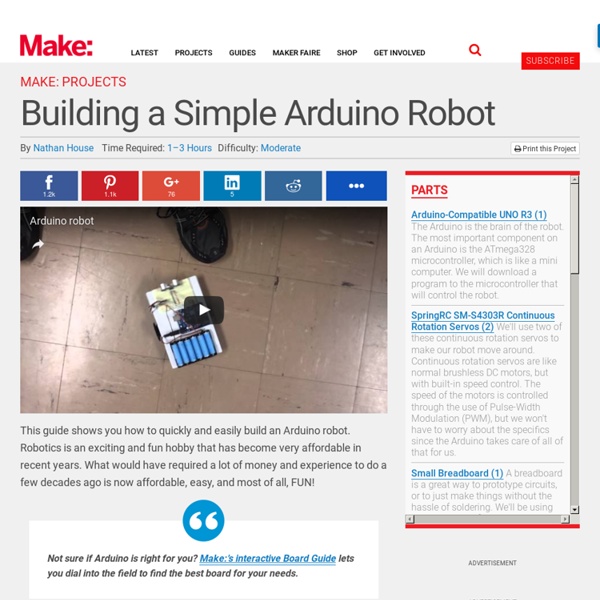 Step #1: Making the Chassis Place the battery pack face down and orient it so that its cable is facing you.Take two pieces of double sided tape and adhere them on the long sides of each servo. Ensure servo alignment at the bottom. Peel the backing off the tape and firmly press the servos onto the battery pack. Note: Make sure to apply the servos on the end where the wire is coming out, oriented so that the shafts are towards the end of the battery pack. Note: Ensure that the servos are pressed firmly together and that they are centered on the battery pack. Step #2: Breadboard & Arduino Attach the breadboard to the top of the battery pack. Step #4: Wiring the Servos Cut two 3-pin segments off of the long break away header. Step #6: Connecting the Power (pt. 1) The servos shouldn't be powered through the 5V pin on the Arduino because they can draw more current then the Arduino can provide. Step #8: Adding a Kill Switch Step #9: Programming your Robot Check out the code for this robot and my

My First Original Arduino Project: What I Learned About Learning This post is really an op-ed written for those of you who, like myself, are new to making and are just getting into project building with Arduino. You might be a little overwhelmed. You might think you can’t learn this stuff. sans titre mBot with Me LED Matrix Have you ever imagined how vivid it would be if a dynamic face plate is added on your robot which enables it to have various facial expression like a real man? Or have you tried to program LED walls to display animations or characters? What Me LED Matrix 8×16 can do is to help you achieve these gorgeous display effects. It’s highly welcomed by mBot users. DIY Power Supply !: 6 Steps AdWords We use AdWords to deploy digital advertising on sites supported by AdWords. Ads are based on both AdWords data and behavioral data that we collect while you’re on our sites. The data we collect may include pages you’ve visited, trials you’ve initiated, videos you’ve played, purchases you’ve made, and your IP address or device ID. This information may be combined with data that AdWords has collected from you.

Seed Spreading Robot Last summer it was brought to my attention that you could buy nearly everything you needed for automated lawn care but a seed spreading robot. This intrigued me. For starters, why on Earth would anyone make lawn care robots in the first place? Control RGB LEDs with this Android-Arduino Combo-Circuit Connect a multicolor LED strip to your smartphone to make a touch-controlled light show! You can attach the color-changing LEDs to the underside of a coffee table, your bike, or anything else you think needs a bit more color. With our latest Weekend Project we’ll show you how to combine an Arduino, a simple solderless breadboard circuit, and your Android device (which must be compatible with USB host mode) to control a strip of full-color RGB LEDs.

mBot get started – Open-source Arduino Robot Building Platform mBot-Blue(2.4G Version) mBot-Blue(Bluetooth Version) Unpack your mBot and assemble Download mBot instruction to put all parts together. L9110 H-bridge module By admin on 31/05/2013 L9110 H-bridge I bought another small motor driver, this time a module with 2 L91110 H-bridge chips. These dual L9110 H-bridge modules can be found for 3-4$ on Ebay or from Chinese webshops. The module has 2 L9110 IC’s, so it can control 2 DC motors or 1 stepper motor.

Oculus Rift-Based System Brings True Immersion to Telepresence Robots Remote presence robots, as the name implies, act as your stand-in at a distant location, letting you move around and see and hear through a robotic surrogate. Space agencies, researchers, and the military have developed high-end telepresence systems that offer an immersive experience, but these units can cost millions of dollars. Consumer telepresence robots (like the Double or Beam), on the other hand, cost much less but can’t create a sense of immersion—you’re staring at a video feed on a computer screen, after all. Now a team of roboticists at the University of Pennsylvania is using affordable sensors and actuators and virtual reality technologies like Oculus Rift to build a platform that offers the same capabilities of a high-end telepresence system at a reasonable cost. When you put on a virtual reality system like the Oculus Rift, you’re looking at a virtual world that’s being rendered inside of a computer just for you.