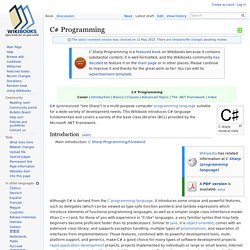 Getting started with C# A simple C# program and where to get tools to compile it. Basics[edit] Basic syntax Describes the basics in how the applications you write will be interpreted. Naming conventions Quickly describes the generally accepted naming conventions for C#. Variables The entities used to store data of various shapes. Operators Summarizes the operators, such as the '+' in addition, available in C#. Data structures Enumerations, structs, and more. Control statements Loops, conditions, and more. Exceptions Responding to errors that can occur. Classes[edit] Namespaces Giving your code its own space to live in. Classes The blueprints of objects that describes how they should work. Objects Cornerstones of any object-oriented programming language, objects are the tools you use to perform work.

Encapsulation and accessor levels Advanced Topics[edit] Inheritance. Untitled. Untitled. LED Circuits Our goal here is to provide an overview of the basic types of circuits used to power LEDs. 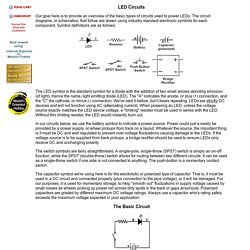 The circuit diagrams, or schematics, that follow are drawn using industry standard electronic symbols for each component. Symbol definitions are as follows: The LED symbol is the standard symbol for a diode with the addition of two small arrows denoting emission (of light). Hence the name, light emitting diode (LED). In our circuits below, we use the battery symbol to indicate a power source. The switch symbols are fairly straightforward. The capacitor symbol we're using here is for the electrolytic or polarized type of capacitor. The Basic Circuit This is as simple as it gets. An example working through this formula can be found on our Bridge wiring tips page. In the schematic above, we have both the limiting resistor and the switch connected on the positive (+) side of the circuit. Circuits with two or more LEDs. Untitled. Some LED circuits explained examples from various projects: flashing LEDs, 220V LEDs and more. 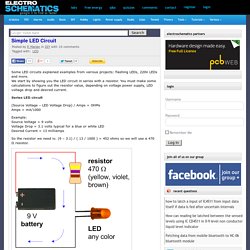 We start by showing you the LED circuit in series with a resistor. You must make some calculations to figure out the resistor value, depending on voltage power supply, LED voltage drop and desired current. Series LED circuit (Source Voltage – LED Voltage Drop) / Amps = OHMs Amps = mA/1000 Example: Source Voltage = 9 volts Voltage Drop = 3.1 volts typical for a blue or white LED Desired Current = 13 milliamps So the resistor we need is: (9 – 3.1) / ( 13 / 1000 ) = 452 ohms so we will use a 470 Ω resistor. 220 volt LED circuit Caution: Do not try this circuit unless you have good knowledge about electronic devices.

We use one capacitor, a zener diode, a resistor and the LED. Some LED flasher circuits… Joystick Controller - PCB and Wiring. PCB Attributes Circuits are at the heart of electronics. 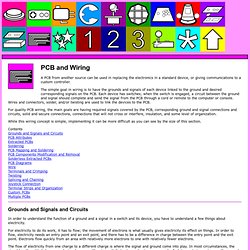 In order to compact, organize, and exploit many circuits, they are often printed on a board, making a printed circuit board, ie a PCB. Numerous and detailed conductive paths lay out the circuits and functions for a device. The bulk of most PCBs is made of a light, highly durable, nonconductive substance with a texture similar to fiberglass. On this another nonconductive layer (usually dark-green) that bonds well to metal is added. In older PCBs, usually only one side of the PCB is used. Solder points consisting of an open metal plate with a hole in the center are used to connect wires that send and receive signals. Originating from a wire in the cord or battery is the ground; it usually gets spread throughout the PCB in a long path. Image: NES PCB The PCB's structure can be regarded as simple nodes (like solder and button points) and connections (paths) between those nodes (this is how electronics diagrams are made).