Future - Killer robots: The soldiers that never sleep. US Army to Replace Human Soldiers with “Humanoid Robots” By Christopher Scholl What will a robot army look like? 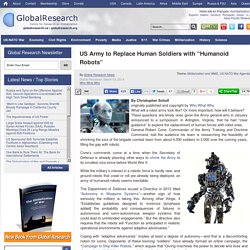 Or more important, how will it behave? These questions are timely ones given the Army general who in January announced to a symposium in Arlington, Virginia, that he had “clear guidance” to explore the replacement of human forces with robot ones. General Robert Cone, Commander of the Army Training and Doctrine Command, told the audience his team is researching the feasibility of shrinking the size of the brigade combat team from about 4,000 soldiers to 3,000 over the coming years, filling the gap with robots. Cone’s comments come at a time when the Secretary of Defense is already planning other ways to shrink the Army to its smallest size since before World War II. While the military’s interest in a robotic force is hardly new, and ground robots that crawl or roll are already being deployed, an army of humanoid robots seems inevitable. What makes Atlas most remarkable is its “humanoid” scale. The robot army of the future - from killer drones to cyborg super soldiers.

The US military is currently looking for robot specialists to build swarms of war drones that work together without the need to be individually controlled by pilots on the ground. 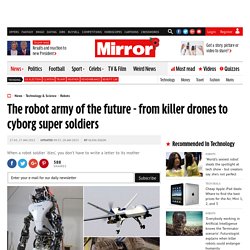 It's yet another milestone in the shift towards building the sorts of robot armies we've grown used to seeing in science fiction. So far, autonomous robots have played a minor role in warfare - with a limited number of drones carrying out aerial bombing in Afghanistan and Pakistan as well as robots being used for bomb disposal and surveillance. However, defence agencies across the world are investing heavily in technology that can reduce bloodshed and automate acts of war, with one senior American officer saying he could replace a quarter of troops with robots and remote-controlled vehicles.

There are also moves being made to develop cyborg soldiers - humans and animals augmented by technology. US Army set to give soldiers a robot arm for shooting: Exoskeleton stabilises shaky hands so that infantry always hit the target. Device also improves a soldier's aim after they've stopped wearing itAccelerometers and gyroscopes are attached to the shooter's armsThese can sense even the tiniest tremble in shooter's arm movementsBased on the data, the robot arm applies force to counteract the tremors By Ellie Zolfagharifard For Dailymail.com Published: 00:43 GMT, 11 June 2015 | Updated: 01:43 GMT, 11 June 2015 US soldiers could soon be given a robotic arm that helps them shoot with deadly accuracy. 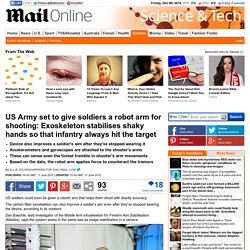 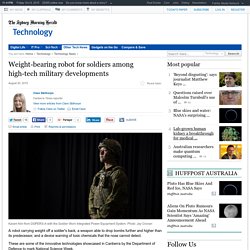 Photo: Jay Cronan A robot carrying weight off a soldier's back, a weapon able to drop bombs further and higher than its predecessor, and a device warning of toxic chemicals that the nose cannot detect. These are some of the innovative technologies showcased in Canberra by the Department of Defence to mark National Science Week. The new bomb technology has the potential to "change the way the air force operates", Defence Science and Technology (DST) scientist Dr Andrew Snowden says. Andrew Snowden explains the JDAM-ER (Joint Direct Attack Munition - Extended Range) wing kit.

The new design adds wings to the standard Joint Direct Attack Munition (JDAM) weapon – which converts unguided bombs into precision-guided munitions – to extend its range and therefore reduce the risks of deployment. Soldier of the Future? - Atlas — Boston Dynamics’ Humanoid Robot; Boston Dynamics is a robotics company (recently purchased by Google) which, among other things, has been developing robots for use by the US Military. 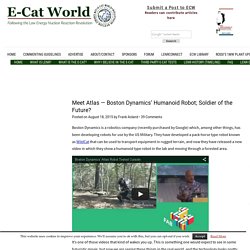 They have developed a pack-horse type robot known as WildCat that can be used to transport equipment in rugged terrain, and now they have released a new video in which they show a humanoid type robot in the lab and moving through a forested area. It’s one of those videos that kind of wakes you up. This is something one would expect to see in some futuristic movie, but now we are seeing these things in the real world, and the technology looks pretty impressive. However, when one thinks of these kinds of robots in military terms, it brings up images of a whole new kind of combat, where machines, not humans are put on the front lines to carry out dangerous missions — like drones are doing in the air.

We could be moving into a very different world. Robot Soldiers: 02/11/2010, Behind the News. Well there's a bunch of school kids working on building the next generation of battlefield robots. 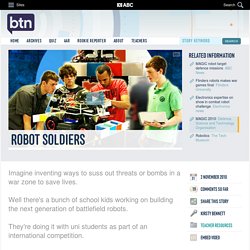 They're doing it with uni students as part of an international competition. So we sent Professor Kirsty to meet the brains behind these remote-controlled soldiers. KIRSTY BENNETT, REPORTER: They've got eyesight, some skills and a mission just like a real soldier. These are battlefield robots out on patrol. Their mission is to locate threats like a bomb or baddies and give everyone the heads up back at base. AIDAN, STUDENT: OK it looks as if we've found a terrorist.