Telenoid, a "minimalistic human" Jazz-singing robot. Antonio Chella at the University of Palermo, Italy, is working with a Telenoid robot, developed by the Hiroshi Ishiguro Laboratory in Japan (pictured). 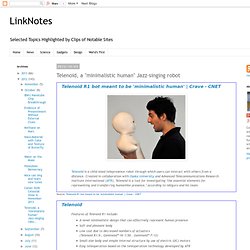 To start with, the Telenoid will be trained to mimic the movements and simple sounds made by a human singer, as well as associate parts of music with different emotional states. Chella then plans to see if the robot can use these associations to improvise - choosing movements and vocalisations that complement its human duet partner.Intelligence is often defined as the ability to find connections between existing entities - understanding that a key goes in a lock, for instance. But Chella suggests that a conscious organism should be able to go a step further and introduce novel connections - between, say, musical phrases - that result in the creation of something new. That, in essence, is the idea behind improvisation.

Telenoid R1 bot meant to be 'minimalistic human' Japanese roboticist Hiroshi Ishiguro has unveiled his latest creation, and it's a far cry from the ultra-lifelike robot clones he has produced in the past. 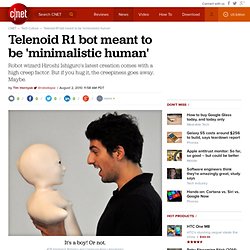 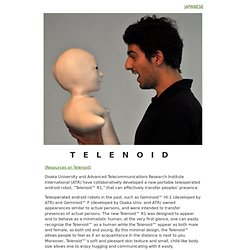 Teleoperated android robots in the past, such as Geminoid™ HI-1 (developed by ATR) and Geminoid™ F (developed by Osaka Univ. and ATR) owned appearances similar to actual persons, and were intended to transfer presences of actual persons. The new Telenoid™ R1 was designed to appear and to behave as a minimalistic human; at the very first glance, one can easily recognize the Telenoid™ as a human while the Telenoid™ appear as both male and female, as both old and young.

By this minimal design, the Telenoid™ allows people to feel as if an acquaintance in the distance is next to you. Moreover, Telenoid™’s soft and pleasant skin texture and small, child-like body size allows one to enjoy hugging and communicating with it easily. Telenoid. Talk with Telenoid, Ars Electronica. Consciousness and All That Jazz. By Elizabeth Leafloor | www.RedIceCreations.com Could a robot that sings jazz be the key to understanding and harnessing robot intelligence? 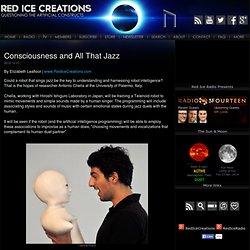 That is the hopes of researcher Antonio Chella at the University of Palermo, Italy. Chella, working with Hiroshi Ishiguro Laboratory in Japan, will be training a Telenoid robot to mimic movements and simple sounds made by a human singer. The programming will include associating styles and sounds of music with certain emotional states during jazz duets with the human.

Jazz-singing robot could shed light on consciousness - tech - 27 September 2012. ROBOTS and humans will soon be living in harmony. 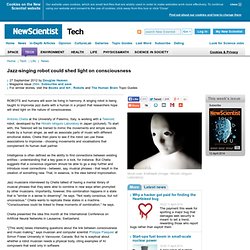 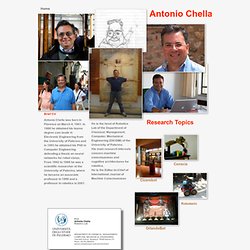 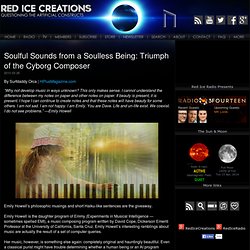 This only makes sense. I cannot understand the difference between my notes on paper and other notes on paper. If beauty is present, it is present. I hope I can continue to create notes and that these notes will have beauty for some others. Emily Howell’s philosophic musings and short Haiku-like sentences are the giveaway. Emily Howell is the daughter program of Emmy (Experiments in Musical Intelligence — sometimes spelled EMI), a music composing program written by David Cope, Dickerson Emeriti Professor at the University of California, Santa Cruz. Her music, however, is something else again: completely original and hauntingly beautiful. 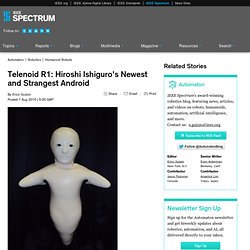 Ishiguro, a professor at Osaka University, is famous for creating humanlike androids designed to "transmit the presence" of people to a distant place. His previous remote controlled androids include a robot replica of himself that he named Geminoid HI-1 and a smiling female android called the Geminoid F. But the new Telenoid R1 robot is quite different. The previous androids had lifelike appearances, every detail trying to reproduce the features of a real person. Ishiguro and his collaborators say the idea was to create a teleoperated robot that could appear male or female, old or young, and that could be easily transported. Here's how the system works: An operator sits at a computer with a webcam and special teleoperation software developed by ATR.