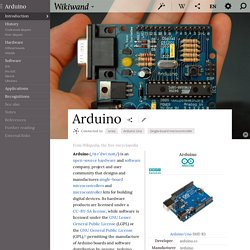 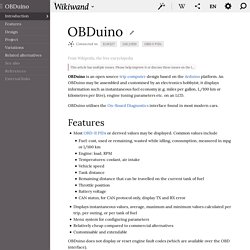 Please help improve it or discuss these issues on the talk page. (Learn how and when to remove these template messages) The topic of this article may not meet Wikipedia's general notability guideline. Please help to demonstrate the notability of the topic by citing reliable secondary sources that are independent of the topic and provide significant coverage of it beyond a mere trivial mention. If notability cannot be shown, the article is likely to be merged, redirected, or deleted.Find sources: "OBDuino" – news · newspapers · books · scholar · JSTOR (March 2017) (Learn how and when to remove this template message) This article relies too much on references to primary sources. Please improve this by adding secondary or tertiary sources. Freediag - Vehicle Diagnostic Suite. Arduino's community hub. Arduino Hardware - Computerphile.

SparkFun Arduino Comparison Guide. DIY and electronics for beginners. Exploring the world of Arduino, microcontrollers and robotics. Have fun! AnalysIR - IR Analyzer & Decoder with Arduino, Raspberry Pi, and MCU. Note: The Kit perks will only be made available to people who have contributed to another perk which includes AnalysIR. 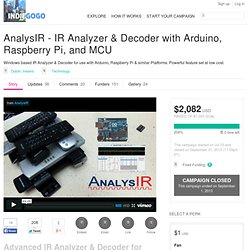 Bonus: AnalysIR now includes support for a number of IR Sources including Arduino, Raspberry Pi, USB IR Toy and TI MSP430 Launchpad. ( We have made lots of updates and added more features to AnalysIR...see the Updates Tab above for all the latest News and BONUS FEATURES! ) New KIT Perk added for existing backers. For details click on the GALLERY TAB above and scroll to the bottom of the Gallery page & open the 'IR Starter Kit' document in the Files Section. Build a bare bones Arduino clone which maximizes its use of real estate. Check out all the stuff crammed into a small swath of strip board. 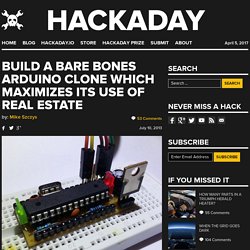 11 Arduino projects that require major hacking skills—or a bit of insanity. Raspberry Pi has received the lion's share of attention devoted to cheap, single-board computers in the past year. 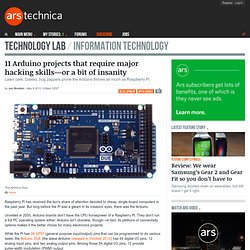 But long before the Pi was a gleam in its creators' eyes, there was the Arduino. Unveiled in 2005, Arduino boards don't have the CPU horsepower of a Raspberry Pi. They don't run a full PC operating system either. Arduino isn't obsolete, though—in fact, its plethora of connectivity options makes it the better choice for many electronics projects. While the Pi has 26 GPIO (general purpose input/output) pins that can be programmed to do various tasks, the Arduino DUE (the latest Arduino released in October 2012) has 54 digital I/O pins, 12 analog input pins, and two analog output pins.

Interfacing a sensor with an Arduino. The world of hobby electronics is one that has seen explosive growth and massive changes over the past few years. The biggest changes have come from the level of computing hardware that is available to the hobbyist. From very simple microcontrollers to full PCs on a USB stick, all sorts of options are available. One of the more popular options is the Arduino, which falls between these two extremes. Use Android’s chronometer timer widget for your apps.

Look at this demonstration of Android's chronometer widget, and see if it's the right tool for the job. 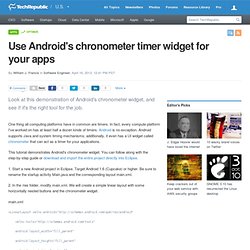 One thing all computing platforms have in common are timers. In fact, every compute platform I've worked on has at least half a dozen kinds of timers. Android is no exception. Don't Spend Money On An Arduino - Build Your Own For Much Less. I love my Arduinos. 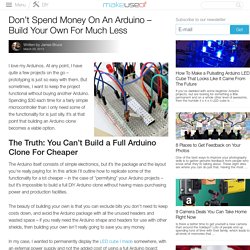 At any point, I have quite a few projects on the go – prototyping is just so easy with them. But sometimes, I want to keep the project functional without buying another Arduino. Spending $30 each time for a fairly simple microcontroller than I only need some of the functionality for is just silly. How to build a 5$ Arduino (clone) If you are like me and build projects with Arduino, you must have felt the frustration with ripping your project apart, because you wanted to build something else with that Arduino. 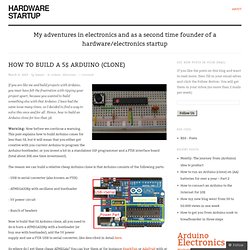 I have had the same issue many times, so I decided to find a way to solve this once and for all. Hence, how to build an Arduino clone for less than 5$. Warning: Now before we continue a warning. Basic Arduino Connections Quick Reference Guide. Open Source Hardware Files. Freeduino is a collaborative open-source project to replicate and publish Arduino-compatible hardware files. 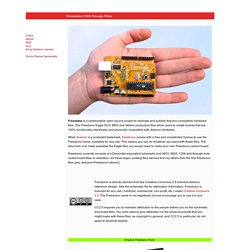 The Freeduino Eagle SCH, BRD and Gerber production files allow users to create boards that are 100% functionally, electrically and physically compatible with Arduino hardware. While Arduino is a protected trademark, Freeduino comes with a free and unrestricted license to use the Freeduino name, available for any use. This means you can do whatever you want with these files. The idea here is to make available the Eagle files you would need to make your own Freeduino variant board.