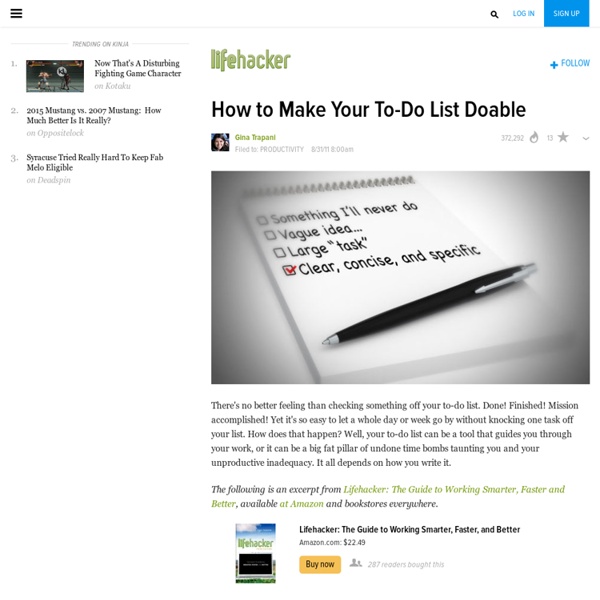 @lyndyn: I have a lot of these repeating tasks (like write Geek to Live feature, for instance, which happens every Wednesday, or go to the post office box to check for new mail, twice a week.) What I do is keep them in a calendar which is always on my desktop, showing me today's reminder items (ie, "Feature story due" and "Pick up mail.") That's stacked just below my todo list. That way I can see immediately what I have to do today by virtue of the fact that it is today, but I don't have to go through the motions of adding, checking off, and re-adding. The next day, the tickler items go away and refresh automatically. YMMV, of course. Flagged

Simplifying David Allen’s Complicated GTD Setup Every Monday is Productivity & Organization Day at Zen Habits. Take a look at the setup on the right. It was published in a recent CNNMoney article on David Allen and GTD, and it outlines The David’s GTD setup. It’s way too complicated. That’s just my opinion, of course, but the master of GTD is a living example of how GTD is a great system that has great concepts, but can get way too tool-heavy and complicated when implemented. It doesn’t have to be that way. Take Back Your Personal Power (Part 2) - Stepcase Lifehack Time to Make Waves In part one of this post we discussed the tendency some of us have to allow situations, circumstances, events and even other people to control our lives; in essence, giving away our power in an attempt to be accepted, valued, appreciated and loved. By trying to “fit in and not make waves” (as someone shared with me recently) it seems that some of us have lost our identity and sense of self. The good news is that we can take back control of our life and still be that kind, generous and thoughtful person – who also happens to be strong, confident, assertive, productive, successful and powerful. And no, we don’t need to compromise our beliefs, goals, character or core values to do so. In fact, taking back our power can be the most important step towards living a life of true purpose, alignment (with our core values), integrity and joy.

Simple GTD® with Apple’s Reminders App If you aspire to get a little more organised in 2013 you are short of excuses since that does not necessarily involve buying, installing, learning and setting up a productivity black belt application such as OmniFocus. Technically all you really need is pen and paper. For the technical more savvy there is the Reminders stock app on your Mac and iOS devices that gets you what you need to start.

How to Organize Evernote for Maximum Efficiency Please note: The way I organize Evernote today is completely different than what I wrote here. You can find my updated methodology here. I have been using Evernote for months. However, I have not really taken time to explore the depth of this incredible program until just recently. Green Sherpa: An Online Cash-Flow Management Tool * Get Rich Slo A couple of months ago, I posted a list of 16 alternatives to Microsoft Money. GRS readers left nearly 200 responses evaluating the various personal finance programs available on the web and for the desktop. One feature that many users crave is the ability to project their future cash flow. While it’s important to track where your money’s gone, some folks find it valuable to predict where money will go in the weeks or months ahead.

McKinsey report: Enterprise Web 2.0 adoption still growing - Net CIO - A new McKinsey report found that many companies have adopted Web 2.0 technologies such as blogs, wikis, social networks and mashups during the past year, with companies on average adding three Web 2.0 tools to their companies technology offerings. But most companies remain on the fence about whether or not they're happy with the new tools pervading their technology diets. Only 21 percent voiced overall satisfaction, according to the report, and 22 percent cited clear dissatisfaction. The poll was conducted with 1,988 executives in June 2008 at enterprises located all around the world.

The Item Hierarchy in v0.8 Parents and children When we want to get something done - like, say, get a web-package to manage my task list - then usually I can't do it in one action: it gets broken down into several tasks. So, I create a project "get a web-package to manage my task list", and then I set out what the very next thing I have to do, to start making that happen: "search web for existing GTD software". That's a next action, and the sole reason I'm doing it is to get one step closer to making the project happen.

Finding a new way to manage my day. - By John Dickerson - Slate Some people carry uplifting phrases with them for inspiration. "Life is not measured by the number of breaths we take but by the moments that take our breath away." I used to carry around the opposite kind of reminder: a list of short sentences that instantly depressed me. My to-do list. It’s Time To Hide The Noise A few days ago, Seesmic CEO Loic Le Meur (@Loic) sent out a retweet with a link to a screenshot of his CTO’s Seesmic Web client showing 1,200 Tweets across nearly 20 columns. The joke was that his CTO was trying to achieve a “world record” for how many Tweets could be loaded up into a Twitter client at one time. (It’s not a world record. Competitor TweetDeck can display an unlimited number of Tweets and columns as well). If you click on the screenshot and pan across the enlarged version of it, there you’ll find a dialog box with Loic’s old avatar doing a hang-10 while kite surfing.

Time management systems - how to choose from the leading systems. Time Management Systems - There are many time management systems available today. An effective system is a key part of getting control of your time. Most people need some sort of a system to save time and make time -- because it is pretty much impossible to keep it all in your head.We like to save you time so we have summarized the key aspects of some of the leading systems available. Top 10 Productivity Basics Explained - Productivity These are some things that I've found work for me: Dual screens. Some may view having dual monitors as a luxury, or simply just not necessary, but let me tell you, it makes a huge productivity boost. Put all your non-mission critical stuff on one side (the left for me), such as iTunes, chat boxes, etc,... stuff you tend to keep open and interact with frequently but isn't the core of your work.

GTD in 15 minutes – A Pragmatic Guide to Getting Things Done GTD—or “Getting things done”—is a framework for organizing and tracking your tasks and projects. Its aim is a bit higher than just “getting things done”, though. (It should have been called “Getting things done in a much better way than just letting things happen, which often turns out not to be very cool at all”.) Its aim is to make you have 100% trust in a system for collecting tasks, ideas, and projects—both vague things like “invent greatest thing ever” and concrete things like “call Ada 25 August to discuss cheesecake recipe”. Personal budget software makes budgeting easier for you and your Limited time offer! Until April 15, save 25% on Account Xpress version 3 39.99 29.99 Click here to place your order Are you looking for a great software product to keep track of your personal finances? Perhaps you may want to know what is your net worth at any given time or be able to follow a budget plan and find out where you can cut your expenses so you can get out of debt or start saving for your retirement. Maybe you want to make sure that you have enough money in your bank account to cover the amount of the check that you are about to write or your next automatic withdrawal. Or maybe you don't want to have to call your bank each time you find an entry on your bank statement that doesn't look like any transaction that you can remember.