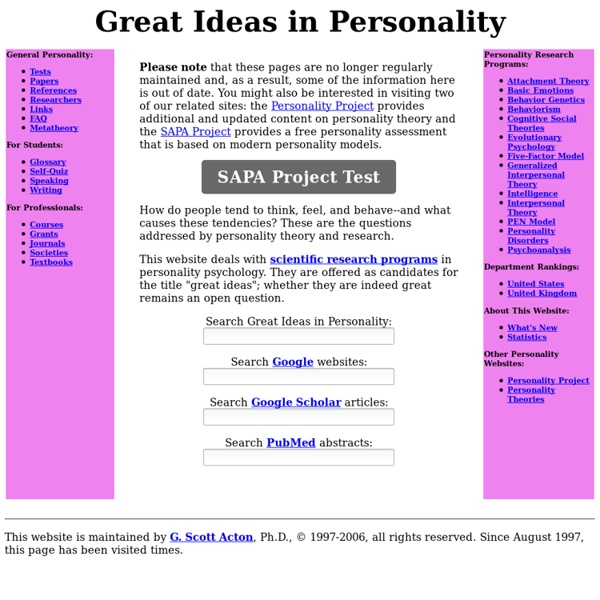 16 Personality Factors The Sixteen Personality Factor Questionnaire (or 16PF),[1] is a multiple-choice personality questionnaire which was developed over several decades of research by Raymond B. Cattell, Maurice Tatsuoka and Herbert Eber. Beginning in the 1940s, Cattell used the new techniques of factor analysis (based on the correlation coefficient) in an attempt to try to discover and measure the source traits of human personality (Cattell, 1946)(Nevid, 2009).[2][3] The questionnaire measures the 16 primary traits, and the Big Five secondary traits,[4][5] which have become popularized by other authors in recent years. The test is an integral part of Cattell's comprehensive theory of individual differences. Outline of Test[edit] The 16PF Fifth Edition contains 185 multiple-choice items which are written at a fifth-grade reading level. When I find myself in a boring situation, I usually "tune out" and daydream about other things. Raymond Cattell's 16 Personality Factors[edit] Factor Analytic Strategy[edit]

Great Ideas in Personality--Tests Personality Tests This page links to numerous online personality tests, with an emphasis on free, professional tests that provide feedback. To view an example of one of these tests, see the SAPA Project. To learn more about personality theory, see the Personality Project. General Personality Sheldon Test This test provides scores on Sheldon's psychological types: viscerotonia, somatotonia, and cerebrotonia. ~ Flip to top ~ Attachment Theory Attachment Style Questionnaire "The statements below concern how you feel in emotionally intimate relationships. Basic Emotions Anxiety Test After finishing this 10-item test, "you will receive a detailed, personalized interpretation of your score that includes diagrams, information on the test topic and tips." Behavior Genetics Sibling and Twin Relationships Survey "You will be asked to answer a variety of questionnaires about your relationships with your siblings and other family members. Behaviorism Cognitive Social Theories Five-Factor Model Intelligence

Table of similar systems of comparison of temperaments Beginnings[edit] The Roman physician Galen mapped the four temperaments (sanguine, phlegmatic, choleric and melancholic) to a matrix of hot/cold and dry/wet, taken from the four classical elements.[1] Two of these temperaments, sanguine and choleric, shared a common trait: quickness of response (corresponding to "heat"), while the melancholic and phlegmatic shared the opposite, a longer response (coldness). The melancholic and choleric, however, shared a sustained response (dryness), and the sanguine and phlegmatic shared a short-lived response (wetness). These are the basis of the two factors that would define temperament in the modern theory. Development[edit] In the last few centuries, various psychologists would begin expressing the four temperaments in terms of pairs of behaviors that were held in common by two temperaments each. This theory would also be extended to humans. These he compared to the choleric, phlegmatic, melancholic and sanguine respectively.[4] Other Factor pairs[edit]

The free five minute personality test! Your Existing Situation Is feeling a large amount of stress due to her inability to achieve goals and her indecisiveness on how to go about changing the situation for the better. Your Stress Sources "is being overworked and her flexibility and hard work are being taken advantage of while trying to deal with problems. Sticks to her goals, but feels intense pressure to succeed. Since the situation is uncooperative and untrustworthy, she would like to walk away from it altogether." Your Restrained Characteristics Giving more than she is getting back and feels misunderstood and unappreciated. "Willing to become emotionally involved, but is demanding and picky when choosing a partner. Conceited and is easily insulted. Feels as if too many walls and obstacles are standing in her way and that she is being forced to make compromises. she needs to put her own needs on hold for the time being. Your Desired Objective Lives life to the fullest. Your Actual Problem Your Actual Problem #2