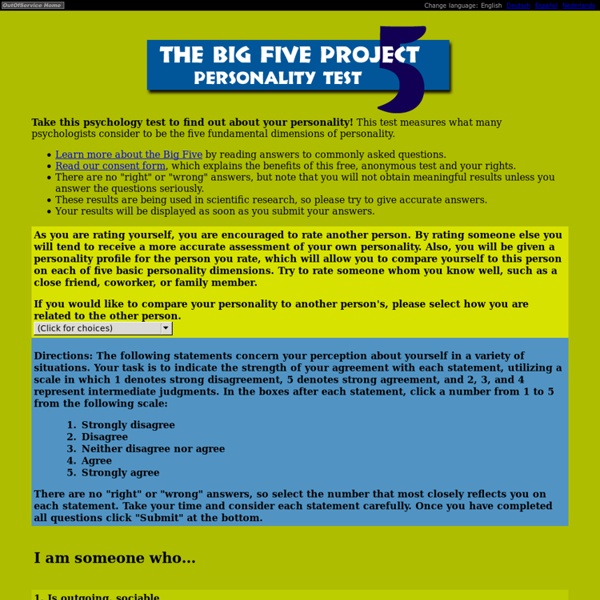 Directions: The following statements concern your perception about yourself in a variety of situations. Your task is to indicate the strength of your agreement with each statement, utilizing a scale in which 1 denotes strong disagreement, 5 denotes strong agreement, and 2, 3, and 4 represent intermediate judgments. In the boxes after each statement, click a number from 1 to 5 from the following scale: Strongly disagreeDisagreeNeither disagree nor agreeAgreeStrongly agree There are no "right" or "wrong" answers, so select the number that most closely reflects you on each statement. Take your time and consider each statement carefully.

French TV contestants made to inflict 'torture' A French TV documentary features people in a spoof game show administering what they are told are near lethal electric shocks to rival contestants. Those taking part are told to pull levers to inflict shocks - increasing in voltage - upon their opponents. Although unaware that the contestants were actors and there was no electrical current, 82% of participants in the Game of Death agreed to pull the lever. Programme makers say they wanted to expose the dangers of reality TV shows. They say the documentary shows how many participants in the setting of a TV show will agree to act against their own principles or moral codes when ordered to do something extreme. The Game of Death has all the trappings of a traditional TV quiz show, with a roaring crowd chanting "punishment" and a glamorous hostess urging the players on.

Free DISC Test Use this Free DISC Personality Test to get a fast estimate of your DISC profile based on answers to 12 short questions. It's fast and it's free. You can probably finish it in less than 10 minutes. Use the results to gain insights you can use to better understand why you communicate the way you do and how you can communicate with others more effectively. With your results, you can: Immediately improve interpersonal communications Connect with co-workers more effectively Understand what you need to be most successful When you click on the button below to open the free DISC assessment window, you'll be on your way to learning more about your DISC personality style.

Top 10 Things That Determine Happiness photo: meddygarnet Happiness is, by nature, a subjective quality with a definition like a moving target. There is scant evidence — qualitative or quantitative — to lend convincing support to those life variables most critical in determining individual happiness, which is likely why past researchers committed to the scientific method rarely tried to tackle the subject. This is changing. ParadigmOfComplexity The last few decades have seen the emergence of a growing body of literature devoted to a critique of the so-called “old” or “Cartesian-Newtonian” paradigm which, in the wake of the prodigious successes of modern natural science, came to dominate the full range of authoritative intellectual discourse and its associated worldviews. Often coupled with a materialistic, and indeed atomistic, metaphysics, this paradigm has been guided by the methodological principle of reductionism. The critics of reductionism have tended to promote various forms of holism, a term which, perhaps more than any other, has served as the rallying cry for those who see themselves as creators of a “new paradigm.” At the forefront of such a challenge, and in many ways the herald of the new paradigm, is the relatively new movement of transpersonal psychology.

20 Things I Should Have Known at 20 1. The world is trying to keep you stupid. From bank fees to interest rates to miracle diets, people who are not educated are easier to get money from and easier to lead. Educate yourself as much as possible for wealth, independence, and happiness. 2. Do not have faith in institutions to educate you.

Watch Obsessed Full Episodes & Videos Online My TV provider is not listed. Why not? We are currently working on adding more TV providers. Please check back frequently to see if your TV provider has been added. Why do I need to log in to watch some video content? Viewers who verify their subscription to a TV provider get access to a deeper catalog of video content, including more full episodes.

CliftonStrengths At Gallup, we recently began shifting the brand from StrengthsFinder to CliftonStrengths. We're changing the name of the engine that powers strengths-based development around the world. The CliftonStrengths assessment is the same online assessment that millions of people have used to tap into their talents to succeed. It's the same assessment invented by Don Clifton. Through his pioneering research and bestselling books like StrengthsFinder 2.0, the former Gallup chairman and inventor of CliftonStrengths brought the power of positive psychology to every corner of the world. For his efforts, the American Psychological Association honored Clifton with a Presidential Commendation as the Father of Strengths-Based Psychology.

Welcome to Adobe GoLive 6 From Los Angeles Times: It's not all about you Chances are, others aren't judging you as harshly as you think, if at all. By Benedict Carey Times Staff Writer January 13, 2003 Foreword to the I Ching - By C. G. Jung Forewordby Carl Gustav Jung HTML Edition by Dan Baruth Since I am not a sinologue, a foreword to the Book of Changes from my hand must be a testimonial of my individual experience with this great and singular book. It also affords me a welcome opportunity to pay tribute again to the memory of my late friend, Richard Wilhelm. He himself was profoundly aware of the cultural significance of his translation of the I Ching, a version unrivaled in the West. If the meaning of the Book of Changes were easy to grasp, the work would need no foreword.

5 of the Best Places to Find Historical Photographs A couple years ago, Larry Ferlazzo shared a hefty collection of ideas for how teachers can use photos in the classroom. Since then, I’ve been regularly incorporating a number of his activities into my writing lessons. I won’t bother to rehash all of Larry’s ideas here, but I do want to share a few of the websites where I find cool, and often strange, historical photos. Retronaut is hands down one of my all-time favorite websites.

Your Sparketype Results! - Good Life Project What if none of these feels like they're me? What if I am "The Outlier?!" If you're reading this, apparently your Sparketype Assessment agrees. You, my friend, are "a Special Case" we call The Shapeshifter. The Shapeshifter isn't actually a Sparketype, it's a "phase" of discovery that we all move through on the way to finding our Sparketype. And, here's the great thing. 10 More Common Faults in Human Thought Humans This list is a follow up to Top 10 Common Faults in Human Thought. Thanks for everyone’s comments and feedback; you have inspired this second list! It is amazing that with all these biases, people are able to actually have a rational thought every now and then.

The Problem of Perception First published Tue Mar 8, 2005; substantive revision Fri Feb 4, 2011 Sense-perception—the awareness or apprehension of things by sight, hearing, touch, smell and taste—has long been a preoccupation of philosophers. One pervasive and traditional problem, sometimes called “the problem of perception”, is created by the phenomena of perceptual illusion and hallucination: if these kinds of error are possible, how can perception be what it intuitively seems to be, a direct and immediate access to reality? The present entry is about how these possibilities of error challenge the intelligibility of the phenomenon of perception, and how the major theories of perception in the last century are best understood as responses to this challenge. 1. The Problem of Perception