And Anything - Anything for a Vote 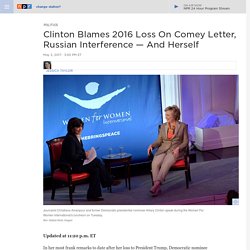 Ben Gabbe/Getty Images hide caption toggle caption Ben Gabbe/Getty Images Journalist Christiane Amanpour and former Democratic presidential nominee Hillary Clinton speak during the Women For Women International's luncheon on Tuesday. Updated at 11:20 p.m. No, Bill Clinton Does Not ‘Know How’ To Fix The Economy. This is In Real Terms, a column analyzing the week in economic news. 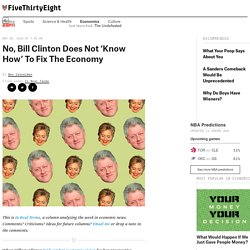 Comments? Criticisms? Ideas for future columns? Email me or drop a note in the comments. More Economics. Hillary Clinton and the 2-for-1 presidency. On The Trail On the Trail HOPKINSVILLE, Ky. — The notion of a 2-for-1 Clinton presidency is back. 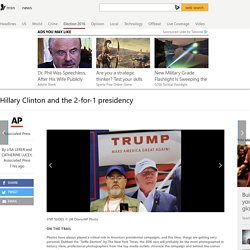 Clinton Defends Death Penalty to Man Who Wrongly Served Years on Death Row. Presidential contender Hillary Clinton was forced to defend her stance on the death penalty at Sunday night’s Democratic town hall in Ohio, after being confronted on the issue by a man wrongfully imprisoned for 39 years. 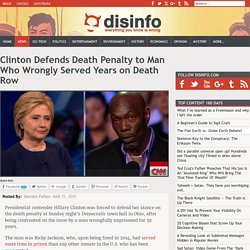 The man was Ricky Jackson, who, upon being freed in 2014, had served more time in prison than any other inmate in the U.S. who has been exonerated. “I spent some of those years on death row,” he told Clinton Sunday night, choking back emotion. “I came perilously close to my own execution.” “In light of what I just shared with you and in light of the fact that there are documented cases of innocent people who have been executed in our country, I would like to know how you can still take your stance on the death penalty,” Jackson asked. She struck a similar note on Sunday. You know, this is such a profoundly difficult question. While Bernie Sanders was not asked to address the question on Sunday night, he has come out against capital punishment in the past. Albright Declares: 'Special Place in Hell' for Women Who Don't Vote Clinton.

Maybe it wasn’t such a great idea for Hillary Clinton to invite Madeleine Albright to campaign for her in New Hampshire. 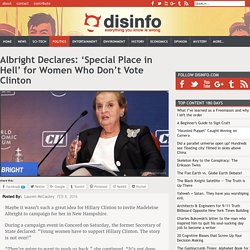 During a campaign event in Concord on Saturday, the former Secretary of State declared: “Young women have to support Hillary Clinton. The story is not over!” Hillary Clinton: ‘I am a progressive who gets results’ Democratic presidential candidates Hillary Clinton told a town hall meeting in Derry, New Hampshire (AFP Photo/Justin Sullivan) Hillary Clinton laid into her Democratic challenger, accusing Bernie Sanders of trying unfairly to hog a progressive mantle but admitting she had work to do to win over young voters. 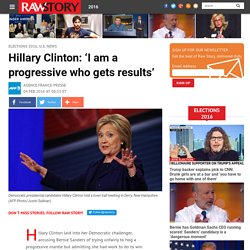 “I am a progressive who gets results and I will be a progressive president who gets results,” she told a town hall meeting in Derry, New Hampshire, where she is fighting against Sanders’ dominance in local polls ahead of next week’s state primary, the second contest in the 2016 race for the White House. “I was somewhat amused today to hear Senator Sanders set himself up as the gatekeeper for the definition of what’s progressive,” she said during the event moderated by television news network CNN.

Clinton defends Wall Street speaking fees: ‘That’s what they offered’ Hillary, why are you always lying? It’s been documented, Hillary Clinton has a truth problem and it’s getting worse. 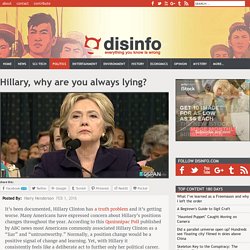 Many Americans have expressed concern about Hillary’s positions changes throughout the year. According to this Quninnipac Poll published by ABC news most Americans commonly associated Hillary Clinton as a “liar” and “untrustworthy.” Normally, a position change would be a positive signal of change and learning. Bill Clinton's Former Adviser: Hillary Is The Most Qualified Candidate Since Washington. Hillary Clinton Speaks About 'New Beginning' With The Press. By Amanda Becker WASHINGTON, March 23 (Reuters) - Likely U.S. presidential candidate Hillary Clinton made light of her sometimes contentious relationship with the press during an appearance at a journalism awards ceremony Monday night. 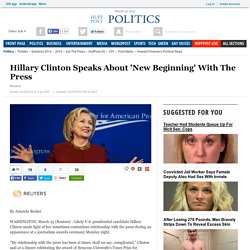 "My relationship with the press has been at times, shall we say, complicated," Clinton said at a dinner celebrating the award of Syracuse University's Toner Prize for Excellence in Political Reporting. "So I thought to myself what could possibly go wrong," Clinton added, referencing the large number of political reporters in attendance. Hillary: a Disaster in the Making. One longs for a candidate for president of the United States possessing those rare traits of statesmanship, honesty and integrity. 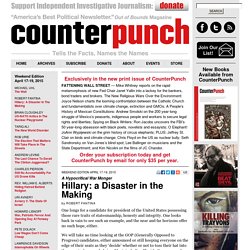 One looks back in vain to see such an example, and the near and far horizons offer no such hope, either. We will take no time looking at the GOP (Generally Opposed to Progress) candidates, either announced or still keeping everyone on the edge of their seats as they ‘decide’ whether or not to toss their hat into the soon-to-be-crowded ring. Most, including Florida Governor and brother of one of the nation’s worst presidents ever, Jeb Bush, and New Jersey Governor, the obnoxious blowhard Chris Christie, have already decided, but enjoy the spectacle of endless conjecture. So they wait. But on the Democratic side, no less a worthy than Hillary Rodham Clinton, lawyer, former First Lady, former senator, former Secretary of State, has slow-balled her tattered hat into an otherwise empty ring. No, we don’t. Campaign 2016: Hillary Clinton's Fake Populism Is a Hit. Hillary Clinton ran onto the playing field this week, Rock and Roll Part 2 blaring in the background, and started lying within minutes of announcing her entry into the presidential election campaign. 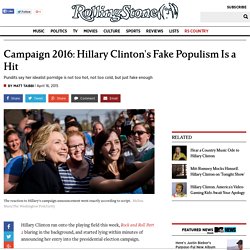 "There's something wrong," she told a crowd of Iowans, "when hedge fund managers pay lower taxes than nurses or the truckers I saw on I-80 when I was driving here over the last two days. " Oh, right, that. The infamous carried interest tax break, the one that allows private equity vampires like Mitt Romney and Stephen Schwartzman to pay a top tax rate of 15 percent while all of the rest of us (including the truckers Hillary "saw" – note she didn't say "hung out with Bill and me over chilled shrimp at the Water Club") pay income taxes.

The carried interest loophole is an absurd, completely unjustifiable handout to the not merely well-off but filthy rich, and it's been law in this country for about three decades. Hillary Clinton To Nation: ‘Do Not Fuck This Up For Me’ WASHINGTON—After several seconds spent sitting motionless and glaring directly into the camera, former Secretary of State Hillary Clinton reportedly began Sunday’s video announcing her 2016 presidential bid by warning the nation not to fuck this up for her.

“Listen up, assholes, ’cause I’m only saying this once: I’ve worked way too goddamn hard to let you morons blow this thing for me,” said Clinton, repeatedly jabbing her index finger toward the viewers at home while adding that if they thought she was going to simply sit back and watch them dick her over like they did in 2008, they were out of their fucking minds. “Seriously, don’t you dare even think about it. If you shitheads can just get in line, we can breeze through this whole campaign in 19 months and be done with it. Or, if you really want, we can do this the hard way.

Hillary Clinton: The Merciless, Unrelenting March To The Presidency. Hillary Clinton's Ideological Vortex of Power and Planning. Just trust her. Truly, just trust her: to know precisely how much energy we ought to use, where it should come from, how it should be generated, how we should get from here to there, and the effects that her plan will have on the global — the global! — climate, not just in the near term but decades or a century from now. If you do this, you will have embraced “science,” “reality,” “truth,” and “innovation,” and, also, “our children.”

If you don’t go along, you not only reject all those good things; you are probably also a “denier,” the catch-all epithet for anyone doubtful that the brilliance of Hillary Clinton and her czars know better than the rest of humanity how to manage their energy needs into the future. Hillary’s campaign seems designed to prove that F.A.

Hillary Clinton delivers the ultimate Keystone dodge: “If it’s undecided when I become president I will answer your question” Hillary Clinton’s going hard after GOP climate deniers. She’s out with an ambitious, if vague, plan to radically boost renewable energy generation in the U.S. She calls climate change “the most consequential, urgent, sweeping collection of challenges we face as a nation and a world.” But the Democratic candidate is refusing to give environmentalists everything they want. Hillary Clinton Is Pitching Herself To Millennials. Your frivolous summer plans will not stop Hillary Clinton’s relentless march to the White House.

Citizens United is the 2010 Supreme Court ruling that made it possible for individuals, corporations, associations and unions to donate unlimited amounts of money to Super PACs to get candidates elected. The case began when a conservative organization, called Citizens United, produced an unflattering film about Hillary called "Hillary: The Movie. " The Federal Election Commission claimed that the movie violated campaign finance laws prohibiting ads mentioning candidates and funded by corporations or nonprofits from airing 30 days before a primary or 60 days before a general election. Citizens United challenged the FEC ruling in court, claiming a violation of their right to free speech.

Fellow Democratic candidate Sen. Hillary Clinton Goes Big On Immigration. WASHINGTON -- Hillary Clinton vowed on Tuesday that she would not only support immigration reform and protect deportation relief policies put forward by President Barack Obama. If elected president next year, she would expand them. "If Congress continues to refuse to act, as president I would do everything possible under the law to go even further," the 2016 Democratic candidate said at an event with young undocumented immigrants, held at Las Vegas' Rancho High School. Clinton's remarks, which essentially ran down the wish list of immigration activists, were more detailed than most expected. Hillary Clinton Agrees With Elizabeth Warren On Trade Dispute With Obama. Hillary Clinton is opposed to a critical piece of the Obama administration's Trans-Pacific Partnership, which would give corporations the right to sue sovereign nations over laws or regulations that could potentially curb their profits.

The policy position is contained in her book Hard Choices, and was confirmed to HuffPost by a spokesperson for her presidential campaign. Obama and congressional Democrats are locked in a bitter public feud over TPP -- a deal between 12 Pacific nations -- with much of the controversy derived from concerns it will undermine regulatory standards.