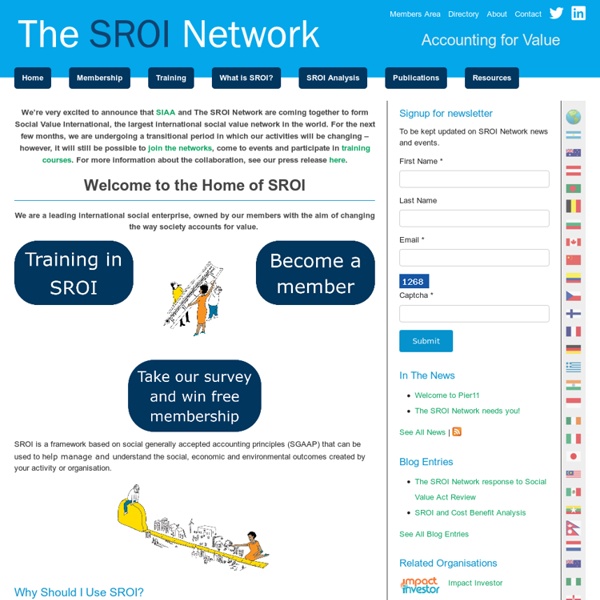 Consumo Colaborativo Social Return on Investment Like other outcomes approaches, SROI can help you manage and improve services and make your organisation more sustainable. It can also improve your relationships with stakeholders; stakeholder engagement is a very important part of the SROI process and is one of its real strengths. SROI is especially useful if the funders of an organisation require outcomes information in financial terms. How does SROI work? SROI is different from many other approaches in that it values outcomes by using financial proxies, so that they can be added up and compared to the investment made. This results in a ratio of total benefits (a sum of all the outcomes) to total investments. While the ratio is important, SROI is about much more than this. There is understandable fear that funders may use the ratio – and this only – to guide funding decisions. Who can use SROI? Implementing any new system can take time and resources. CES and SROI

What is SROI - The SROI Network What is Social Return on Investment (SROI)? SROI is based on seven principles: These principles are core to SROI and how it should be used. SROI is an approach to understanding and managing the value of the social, economic and environmental outcomes created by an activity or an organisation. SROI seeks to include the values of people that are often excluded from markets in the same terms as used in markets, that is money, in order to give people a voice in resource allocation decisions. If you are producing a report of your SROI, we recommend that you have the report assured. Go to the SROI Guide documents Why are the principles so important? The principles are the building blocks for SROI analysis and the assurance process focuses on compliance with these principles. Principles are important because: Download the Seven Principles of SROI document > What about the social return on investment ratio? What is the relationship between IRIS and SROI? What is the relationship between SROI and GIIRS?

Social return on investment Social return on investment (SROI) is a principles-based method for measuring extra-financial value (i.e., environmental and social value not currently reflected in conventional financial accounts) relative to resources invested. It can be used by any entity to evaluate impact on stakeholders, identify ways to improve performance, and enhance the performance of investments. A network was formed in 2006 to facilitate the continued evolution of the method. Over 570 practitioners globally are members of the SROI Network. The SROI method as it has been standardized by the SROI Network provides a consistent quantitative approach to understanding and managing the impacts of a project, business, organisation, fund or policy. Some SROI users employ a version of the method that does not require that all impacts be assigned a financial proxy. Development[edit] 'Value the things that matter' includes the use of financial proxies and monetisation of value and is unique to the SROI approach.

Circular Economy 100 What is the Circular Economy 100? The Circular Economy 100 is a global platform bringing together 100 pioneering businesses engaged in accelerating the transition to a circular economy over a 1000-day (3 year) period. The programme will provide the opportunity for companies to stimulate circular economy innovation, foster collaboration, build capacity and unlock the economic opportunity through accelerator workshops, distance learning modules and an annual summit, hosted by the Foundation and its Founding Partners. Business Rationale Following the launch of the Foundation’s first report in Davos in 2012 the circular economy has rapidly gained the attention of business and government and highlighted an opportunity worth up to 630bn USD for businesses making the transition towards a circular economy. Who's Involved Some 18 companies including have already confirmed their membership of the programme: How will your organisation benefit? The Library Acceleration Workshops Networks and Partnerships

SROI 'open to misunderstandings' By Sophie Hudson, Third Sector Online, 10 January 2011 Third Sector Research Centre Measuring charities' impact through the social return on investment method can be unreliable and has limited uses, according to a new report by the Third Sector Research Centre. The SROI framework puts a financial value on work performed and results achieved, and calculates a ratio to show how effective a charity is. In its report The Ambitions and Challenges of SROI, the centre says the tool is being used increasingly by organisations that are competing for contracts or philanthropic funds, despite the fact that it has numerous problems. "Although aiming for rigour, the method used leaves ample room for not only judgement that makes it possible to inflate the value created when there is no assurance system used, but also for misunderstandings regarding how to interpret and use the SROI ratios," the report says. It can be particularly unreliable to use SROI to compare organisations, it adds.

The Problem with SROI Many who love the concept of SROI thrill to the vision of a universal performance measure that places human and environmental well-being on par with financial wealth…. Or to the vision that do-gooders might really be able to account for their performance…. Or that philanthropic money might be allocated against more objective criteria…. On the other hand, many of those who dislike it can’t stand that it implies that you could sum up all that is of value into a single, quantitative ratio…. Many of us, however, see a middle ground: that SROI in practice may provide a coherent underlying architecture on which to build processes and tools that help organizations manage the social returns of their investments in a hands-on way. The analogy to financial ROI implies that SROI is two things: one, comprehensive, and two, a single ratio. That presents us with a choice. Fortunately digital technology and the internet open up the possibility of transmitting videos just as easily as 1s and 0s.

From a Facebook group to an organization - the OuiShare Manifesto It all started in 2010, when Antonin Léonard was blogging about collaborative consumption in French. Little did he know that this was the beginning of the organization we now call OuiShare – a network of people with common values, which have finally been summarized in a manifesto. In its early stages, the OuiShare community was a Facebook group created by Antonin in April 2011 to connect people who believed in the potential of the collaborative economy and were trying to make it a reality. Shortly afterwards, they began to organize meetups every month in Paris at Next&Coworking or at Nathan Stern’s place to continue their discussions about the collaborative economy in person. It was then that Antonin felt he was on to something bigger: My intuition was that a new culture was emerging, a culture of openness, transparency, empathy and that this culture would be the foundation of what would become OuiShare. A mutual sentiment felt worldwide First meetups at Nathan’s place in Paris. Openness.

Social Return on Investment There are many things we value that cannot be easily captured in traditional economic terms. Conventional cost-benefit analysis does not consider anything beyond simple costs and price, which is why we have developed alternative tools to measure social and environmental impacts. Social Return on Investment is an analytic tool for measuring and accounting for a much broader concept of value, taking into account social, economic and environmental factors. Key Facts £1 invested in high-quality residential care for children generates a social return of between £4 and £6.10. £1 invested in alternative, non-prison based sentencing for women offenders generates a social return of £14. Featured Work Publication // December 14, 2009 A Bit Rich Calculating the real value to society of different professions More