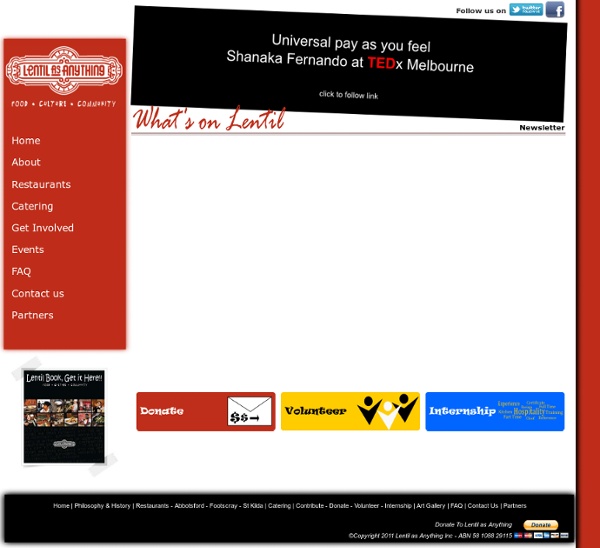 Related:  Lentil As Anything

Home Food Places Lentil As Anything The Edible Schoolyard Project The Original Edible Schoolyard at Martin Luther King, Jr. Middle School in Berkeley, California Seventeen years ago, Alice Waters was quoted in a local newspaper, claiming that the school she passed every day looked like no one cared about it. Neil Smith, then principal of Martin Luther King, Jr. Middle School, contacted Alice with the acre of blighted land on the school's grounds firmly in mind. He wanted her to see the school and perhaps find a way to help. Recognizing the potential of the idea, Zenobia Barlow and the Center for Ecoliteracy provided funding for the Edible Schoolyard Berkeley's (ESY Berkeley) first full-time garden director, David Hawkins. In the fall of our third year, the kitchen became a reality. Many of the school’s teachers, increasingly comfortable with hands-on learning, collaborated with David and Esther to generate garden and kitchen lessons linked to classroom studies. As the garden grew so did the program. Chez Panisse Foundation School Lunch Initiative

Shanaka Fernando – August 24th event | TEDxMelbourne Shanaka Fernando is a revolutionary. For many years he has been well-known in Melbourne, Australia, as the pioneer of the Lentil as Anything pay-as-you-feel vegetarian restaurants. In recent times he is becoming influential as a public speaker and motivator.. Shanaka inspires by example. Born in Sri Lanka, since his late teens Shanaka has travelled extensively throughout countries including Kenya, Brazil, Thailand and Indonesia, curious about the culture of people living more closely with nature, people who have little contact with civilization. Shanaka was named Local Hero in the Australia Day awards in 2007 for his non-profit, socially responsible Lentil As Anything restaurants. “You get fed and treated with dignity even if you don’t have any money, and the colour of your skin and your education and your beliefs only put you on a par with everyone else.” Shanaka lives and promotes a simple lifestyle and resided in a tent for three years in the dunes behind a Melbourne beach.

Lentil as Anything - Everybody deserves a place at the table - book by Shanaka Fernando “When money loses its value, the goodwill and kindness we extend to each other will emerge as the ultimate and most sustainable currency of exchange.” Shanaka Fernando is often hailed as a modern-day revolutionary. As the founder of the Lentil As Anything community restaurants in Melbourne that feed thousands every week, he advocates a unique business and life perspective. Entrancingly honest and refreshingly candid, Shanaka’s memoir hints at the roots of his early social awakening with tales of a 1970s childhood in Sri Lanka. Shanaka’s example of what can be achieved based on an inclusive ‘people-first’ philosophy will inspire, challenge and provoke insights and questions that are undeniably worthy of attention. "Fernando is one of those rare pioneers who are prepared to live by their convictions, flaunt social convention and challenge the status quo. Shanaka Fernando is a revolutionary.

How To: Work with Canned Chipotle Peppers in Adobo Sauce Every time I write a post including canned chipotle peppers I think we should really have a resource post for those who aren’t familiar with them or might even be afraid to try something new. So here we go! What are they? Chipotles are small peppers (often jalapenos), usually 2-3 inches long that have been dried by a smoking process that gives them a dark color and a distinct smoky flavor. The canned variety we are talking about are canned in a red sauce that has a fantastic, smoky flavor as well. Where do I find them? Are they spicy? Is there an alternative? How do I handle them? Most recipes call for a very small amount and I feel like it’s a waste to buy an entire can. Me too! Line an ice cube tray with plastic wrap. I really like to have my sauce and my peppers separated because I have a lot of recipes where I just use the sauce, and others where I use the peppers, and some where I use both. I pulse it a few times until they’re very finely minced. Here’s some of our favorites!

Repair Café Fusion Sundays Dublin - Event NoticeSunday June 10 201211:00 AM World Culture Market Fusion Sundays is a world culture market, focusing on ethnic diversity and integration in Ireland. The market will host an array of stalls from around the world, selling a rich selection of arts and crafts, clothes, food, handmade products, and traditional ware. Fusion Sundays Is Back! Fusion Sundays Market is focusing on the ethnic diversity and integration in Ireland. Enjoy homemade organic Okra Burgers from the Japanese Bakery, or relax in the Moroccan tent with some real Arabic mint tea and baklavas. Stalls from around the world will present a rich selection of arts and crafts, jewelry, traditional ware and much more. There will also be a laughter Yoga session and Samba drumming workshops throughout the day. A Spanish/Irish puppet show will entertain the Kids, while live music on the world stage gives the market an authentic ambience.

Related:
Related:  Lentil As Anything