21 Technologies That Will Decentralize the World 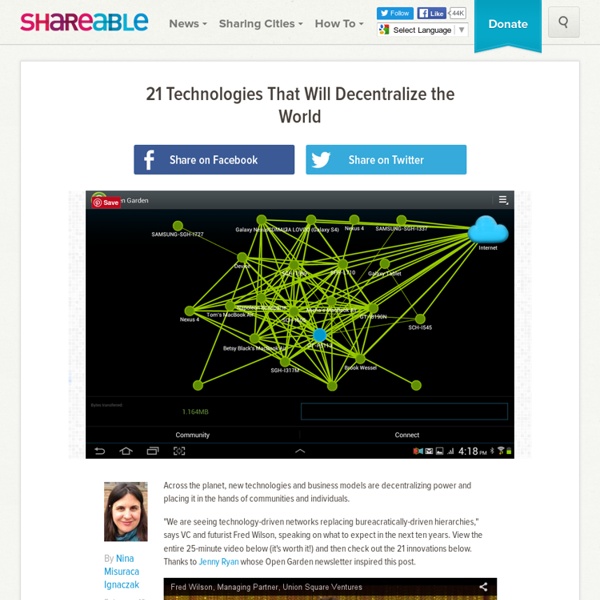 Across the planet, new technologies and business models are decentralizing power and placing it in the hands of communities and individuals. "We are seeing technology-driven networks replacing bureacratically-driven hierarchies," says VC and futurist Fred Wilson, speaking on what to expect in the next ten years. View the entire 25-minute video below (it's worth it!) and then check out the 21 innovations below. Thanks to Jenny Ryan whose Open Garden newsletter inspired this post. Here are 21 innovations that will help make it happen: 1. Decentralized technology will become mainstream in 2014, according to the Open Garden Foundation, a San Francisco-based startup dedicated to net neutrality and internet access for everyone. 2. Commotion Router is free, open source software that allows for communities to build their own mesh networks. 3. Do you really want to trust your data to Twitter? 4. The future of devices is micro and wearable. 5. 6. 7. 8. 9. 10. 11. 12. 13. 14. 15. 16. 17. 18. 19. 20.

Sangreal, The Holy Grail: Recovering the Cosmic Science of Antiquity - Part 1 - Sacred Geometry International The concept of Panspermia underwent a noteworthy mutation through the work of Francis Crick, Nobel Prize winning discoverer of the molecular structure of DNA. After considering the difficulties inherent in achieving an interstellar transfer of organic matter through random processes alone, he was led to propose a startling and controversial idea—that the process of Panspermia was intelligently guided! He coined the term ‘Directed Panspermia’ to express the idea. With this important amplification Exobiology came full circle, arriving at a concept of Cosmic Evolution that has a precedent in the Hermetic wisdom of ancient Egypt, and has maintained an ongoing, but intermittent existence through a variety of sacred and arcane traditions since that time. It shows up in the sacred writings of ancient Vedic Hinduism.

Open Source Ecology Open Source Ecology Home / TED 2011 Filmed at TED2011 – Posted at ted.com on Apr 2011 Leave a Comment Brand is becoming meaningless In the sometimes strange world of branding, there’s a revolution going on. It’s a bit like the Copernican revolution in cosmology, because it’s all about what’s at the centre of things: brand, or something else? For 20 years, particularly for people in the branding world, it’s been orthodox to make brand central.

The Invisible College Archaic Torso of Apollo We cannot know his legendary headwith eyes like ripening fruit. And yet his torsois still suffused with brilliance from inside,like a lamp, in which his gaze, now turned to low, gleams in all its power. Otherwisethe curved breast could not dazzle you so, nor coulda smile run through the placid hips and thighsto that dark center where procreation flared. Otherwise this stone would seem defacedbeneath the translucent cascade of the shouldersand would not glisten like a wild beast’s fur:

OSE TV Interview – Austria Tour Open Source Ecology OSE TV Interview – Austria Tour Home / OSE TV Interview – Austr ... Year: 2008 No More Working Late: At The End Of Each Day, This Office Disappears During the day, this Amsterdam design studio looks like a typical workspace. But at 6 p.m., someone turns a key, and all of the desks suddenly lift up into the air, with computers and paperwork attached. The floor clears, and the space turns into something new. "We are able to pull the tables up into the ceiling and make the whole room into a dance floor, yoga studio, trend session, networking reception, or anything else you can think of--the floor is literally yours," says Sander Veenendaal, creative director for Heldergroen, the company that uses the office during business hours. At nights and weekends, the firm offers the space to others for free.

Jeff Fromm and Leah Swartz: Secrets to Increasing Millennial Engagement Millenial marketing firm shares a secret: you don’t have to sell wine to be loved by millennials Several large companies from Google to Facebook have laid the core infrastructure to allow the next round of entrepreneurs access to build innovative and disruptive business models. In order to be successful, brands must follow along with giants like Facebook and Google and align with four key millennial pillars: Authenticity, Uniqueness, Meaningfulness and Innovation.

Beware the Biochar Initiative Turning bioenergy crops into buried charcoal to sequester carbon does not work, and could plunge the earth into an oxygen crisis towards mass extinction by Dr. Mae-Wan Ho A fully referenced and illustrated version of this article is posted on ISIS members’ website. Details here An electronic version of the full report can be downloaded from the ISIS online store.