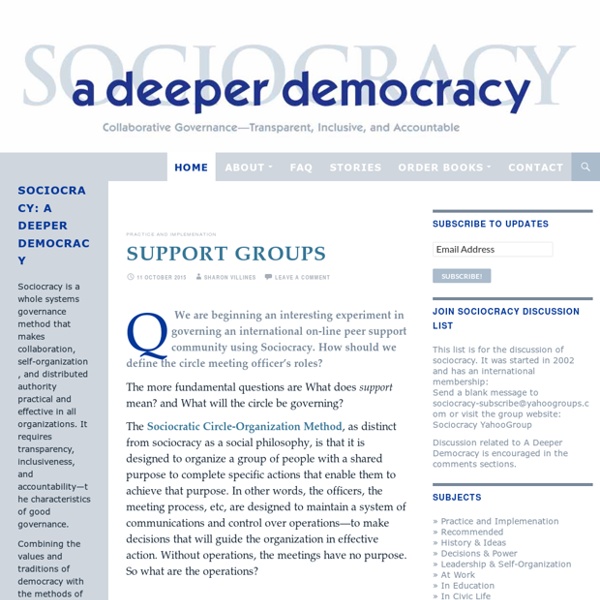 In The Netherlands Sex Education Starts In Kindergarten: Here’s What They Tell Them & Why “People often think we are starting right away to talk about sexual intercourse [with kindergartners]. Sexuality is so much more than that. It’s also about self image, developing your own identity, gender roles, and it’s about learning to express yourself, your wishes and your boundaries.” – Ineke van der Vlugt, an expert on youth sexual development for Rutgers WPF, the Dutch sexuality research institute and the organization behind Netherlands sex education curriculum. Did you know that the Netherlands has one of the lowest teen pregnancy rates in the world?

Sociocracy in Action A New Power Structure For Ethical Governance Sociocracy is a method of governance that ensures inclusiveness, accountability, transparency, and productivity. It creates a structure that both involves all members of the organization in policy decision making and produces a strong and efficient decision-making structure. Sociocracratic Resource Circle Twin Oaks' Sociocracy Homepage "Even though we call ourselves democratic, we still make and obey authoritarian decisions, we often allow ourselves to be led by religious faith and superstition and in many situations, even when far-reaching decisions are involved, we follow the dictates of our instincts, our intuition, our premonitions, feelings, fears." We seem to rely on reasonableness, diligence, honesty, and, above all, solidarity of our fellow humans, but people are also uncaring, idle, and unreliable egotists. To deny, not to mention suppress, these qualities and needs will always lead to frustration and resistence. More than guaranteeing the familiar tolerant attitude to minorities and individuals who deviate from the norm, we must systematically guarantee optimum tolerance for each individual and group when establishes rules for decision-making. And that guarantee comes from....

Theory U – The 1st Proposition I am a huge fan of C. Otto Scharmer’s Theory U. It is one of the most powerful frameworks for understanding the essential shifts we need to make as we step into this paradigm shift. This Sliding Scale Café Takes Food Access to the Next Level SAME Café co-owner Libby Birky says it isn’t uncommon for people to stand confused at the front entrance of this Denver, Colorado, lunch spot, trying to understand exactly how to order a meal. What looks like a casual restaurant is actually a community café—a new, but increasingly popular, business model using a “pay-what-you-wish” approach. Customers walk in, place their order, and sit down with their food. Most diners do pay for their meals—about 75 percent pay something—but none are handed a bill.

Today's Read: Study Provides Further Evidence for Supportive Housing Model - Coalition For The Homeless We’ve known for decades that supportive housing – pairing on-site services with the stability of a permanent home – is one of the most powerful tools in ending homelessness for people with mental illness and other special needs. A study recently published in PLOS ONE underscores the effectiveness of providing homeless people with both housing and supportive services. Over the course of two years, researchers monitored 378 homeless adults with mental illness who were given either housing with intensive case management or treatment as usual.

Food Bikes - Sustainable Economies Law Center What’s a food bike you ask? It’s a low-footprint, low-capital alternative to a food truck. If you’ve ever traveled around Asia or Latin America, you know that most “street food” is peddled by cart or bicycle as opposed to food trucks. Some examples of local food businesses getting around the East Bay by bicycle include Bicycle Coffee, El Taco Bike, and Curbside Creamery (left to right, above). Mobile food and “pop-ups” are becoming increasingly attractive avenues for many food entrepreneurs, especially in the Bay Area.

At Issue: Bringing free, farm-fresh food to kids during the summ BARTON, Vt. - 'The Dream of Internet Freedom is Dying,' Warns Top Civil Liberties Attorney Jennifer Granick, addressing security professionals at the annual Black Hat conference in Las Vegas on August 5, said "the Four Horsemen of the Infocalypse: terrorists, pedophiles, drug dealers, and money launderers" are allowing the government to push for even more regulation and control of the Internet. (Photo: Lily Hay Newman via Slate) "The dream of Internet freedom is... dying," said attorney and civil liberties expert Jennifer Granick during her keynote speech before a major computer security conference in Las Vegas on Wednesday. Granick, formally the civil liberties director at the Electronic Frontier Foundation and now the director of civil liberties at the Stanford Center for Internet and Society, was addressing some of the world's foremost technology experts attending the annual Black Hat information security event this week. Late last month, Snowden himself made a direct plea to technologists to build a new Internet specifically for the people.

10 Steps to Starting a Community Garden In Vancouver, developers discovered that turning their vacant lots into community gardens while they waited for their next project to be ready could save them hundreds of thousands of dollars in city taxes. Putting a garden on a commercially zoned site allows it to be reclassified as public park or garden, resulting in an 80% tax saving — even if it is known that the garden is temporary. In one downtown property where a hotel parking lot was converted to an urban farm, the property owner is saving $132,000 a year in taxes. Given the realities of real estate land values in cities, this policy at least rewards developers for setting up gardens and managing some of them — however temporarily. For the community gardeners involved, even getting a temporary plot is obviously worth it. Getting a Permanent Garden Site